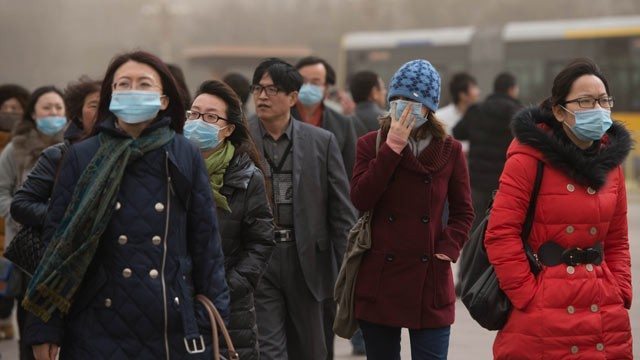 … AND THE GOVERNMENT HAS DECLARED “WAR”

Bottom line? It’s not good (if you live in China).

According to the chart – which includes data from China’s environmental ministry, the World Health Organization (WHO) and the American Lung Association – air pollution in China’s dirtiest ten cities is nearly ten times as bad as it is in America’s ten dirtiest cities. 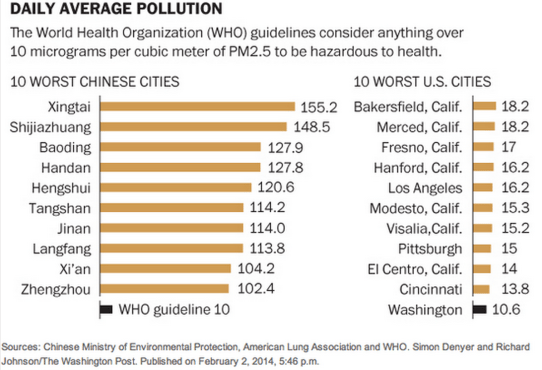 For those of you keeping score at home, the WHO’s recommended limit is ten micrograms.

Five days ago Chinese premier Li Keqiang declared a war on pollution in his country.

“We will resolutely declare war on pollution as we declared war on poverty,” Li said.

Wait … but isn’t the industrialization that lifted 500 million people out of poverty over the last three-and-a-half decades a big part of China’s pollution problem? Yes … which makes one wonder what China will have to declare war on next, in the event its war on pollution ends in victory.

Anyway, we raise these numbers to point out to alarmists stateside that things aren’t as bad as they seem in America – which is experiencing a domestic energy renaissances. Also, despite China’s hack-inducing pollution problem, “global warming” has still been stuck on pause for nearly two decades now …

A nation of 1.3 billion, China implemented market-based reforms beginning in 1978. Since then it has averaged gross domestic product growth of approximately 10 percent per year.

The country will implement its 13th “five-year plan” beginning in 2016.