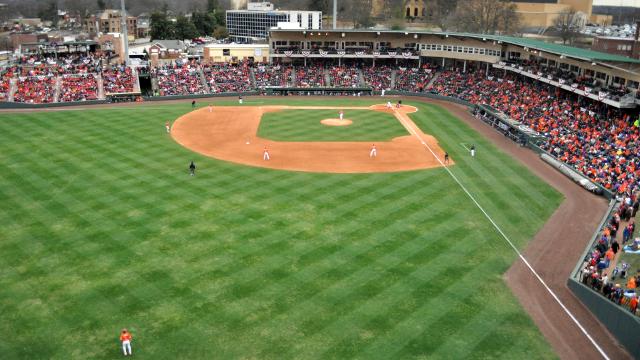 College baseball’s premier rivalry is this weekend as South Carolina (7-0) meets Clemson (6-1) for three games in three different sites.  The series opens on Friday at in Columbia at Carolina Stadium with first pitch at 7 p.m.   Game two of the series shifts to Greenville and the Reedy River Rivalry contest at Fluor Field with first pitch at 2:05 p.m.  The series concludes on Sunday in Clemson at Doug Kingsmore Stadium at 4 p.m.

Carolina has had success against Clemson in recent years winning 20 of the last 28 contests between the two schools dating back to the 2007 season.  South Carolina won two of three games last year with a pair of shutouts.

Saturday:  WMYA My40 will serve as the flagship station, airing the game in the Upstate South Carolina and Western North Carolina, and stations in Charleston (WTAT), Columbia (WOLO), Myrtle Beach/Florence (WPDE), Charlotte (WCCB), Augusta (WJBF) and Savannah (WJCL) will also broadcast the game to their respective markets.   ESPN3 will also stream the game, it is subject to blackout.

South Carolina went 4-0 last week with a midweek victory over Presbyterian 4-0 as well as a three-game sweep of Eastern Kentucky with victories of 4-0, 2-0, 6-0.

The third weekend of the 2013 season featured college baseball’s premier rivalry.  For the fourth straight year, South Carolina and Clemson met in the unique three-game series format with each team hosting the other school with the third contest at a neutral site.  The Gamecocks bookended the weekend with wins vs. the Tigers at Clemson and in Columbia to win the season series.

It would be southpaws Jordan Montgomery and Nolan Belcher that would steal the show for the Gamecocks.

Game one at Doug Kingsmore Stadium in Clemson featured Montgomery, who opened the series with eight scoreless innings of work in a 6-0 win over the Tigers.  Montgomery did not allow a runner to reach third base as he limited the Tigers to three hits and two walks in the victory. Montgomery tied a career-high with eight innings pitched for the third time in his career and struck out a career-high nine batters in the victory.

Clemson answered in game two with a 6-3 victory at Fluor Field in Greenville, S.C. to set up a Sunday rubber game at Carolina Stadium. Clemson starting pitcher freshman Clate Schmidt was effective to earn the win and improve to 2-0 on the year. He allowed two runs on five hits with three walks and five strikeouts. Reliever Matt Campbell worked the final two innings to tally his third save of the season for the Tigers.

That set the stage for Nolan Belcher and the senior delivered.  A capacity crowd of 8,242 fans at Carolina Stadium witnessed Belcher’s finest start in a Carolina uniform as the left-hander pitched a three-hit complete game shutout and was backed by an offense that scored five runs with two outs in the sixth inning as Carolina defeated Clemson 8-0 to clinch the weekend series.  Belcher’s complete game shutout was also the first by a Gamecock pitcher in the Clemson series since May 4, 1986 when Rodney Richey hurled a four-hit complete game shutout in a 5-0 victory vs. the Tigers at Sarge Frye Field.

Scoreless in the fourth inning, the Gamecocks went ahead 1-0 on a solo home run by Chase Vergason. The senior third baseman struck a 2-1 pitch from Scott Firth for his second homer of the year over the right field wall.

With a one-run lead the Gamecocks took advantage of a Clemson error in the sixth inning and struck with four consecutive two-out RBI hits to increase the lead to 6-0. Graham Saiko would reach base to open the frame as a soft liner went off the glove of Clemson second baseman Steve Wilkerson into right field. With two outs and first base open, Clemson intentionally walked LB Dantzler to give the Gamecocks a pair of runners. A wild pitch issued up by Firth moved Saiko over to third base. Joey Pankake would then get things going with a RBI single through the left side scoring Saiko. Erik Payne kept things going with a RBI base hit followed by a RBI single from Grayson Greiner. The Gamecocks then went ahead by six runs on a two-run double down the left field line off the bat of Connor Bright.

Belcher worked a perfect ninth inning with a pair of strikeouts including one of pinch hitter Joe Costigan to end the game.

STREAK AND A RECORD

South Carolina set a school record on Sunday as the Gamecocks recorded the fifth consecutive shutout.  The previous record of four was set in 1972.  South Carolina has not allowed a run in 51.0 straight innings.  The only runs allowed by the Gamecocks so far in the year were four runs in the final two innings of the 17-4 win over Bucknell in the season opener and a pair of runs by the Bison in the third inning of a 12-2 victory in game two of the season.

MORE ON THE PITCHING STAFF

South Carolina’s pitching staff has an impressive 0.86 ERA after the first seven games.  The Gamecocks have allowed just six runs on 40 hits in 63.0 innings with 70 strikeouts to 15 walks.  Opponents are hitting only .179 against the staff.  The staff has not allowed an opponent to reach double-digit in hits at all this season.

MONTGOMERY GETS IT STARTED

Junior left-hander Jordan Montgomery worked seven scoreless innings and allowed just five hits and two walks while striking out four batters in Friday’s 4-0 win over Eastern Kentucky.  Montgomery also has a scoreless streak, as he has not allowed a run in 33.2 consecutive innings going back to last year.

Montgomery is 2-0 in his career against Clemson.  As a freshman in the 2012 NCAA Columbia Regional, he worked 6.2 innings and allowed just two runs on five hits on the way to a 4-3 win and advance the Gamecocks to the Super Regional.  Last season he hurled eight scoreless innings on the way to an 8-0 win at Doug Kingsmore Stadium.  For his efforts, he earned the Tom Price Award as MVP for the Gamecocks for the season series.  He is 14-2 in his career with the Garnet & Black on the mound.

Freshman right-hander Wil Crowe has been honored twice by the Southeastern Conference in the first two weeks of the regular season. This past Monday, he earned SEC Freshman of the Week honors after working 6.1 scoreless innings in Sunday’s 6-0 win over Eastern Kentucky with just four hits allowed and one walk to pick up his second win of the season.

The previous week, Crowe was SEC Pitcher of the Week.  H had an impressive debut as he hurled 6.1 hitless innings in his first career start. Crowe walked just one and hit one batter while finishing with five strikeouts to earn his first career win in a Gamecock uniform. Bucknell had just one runner reach second base and none reach third base while Crowe was on the mound. Crowe retired 13 consecutive batters in a row before coming out of the game as he reached his pitch count total.

Crowe has 10 strikeouts in a team-high 12.2 innings pitched.  Opponents are hitting just .100 against him.

Junior outfielder Connor Bright hit .417 (5-for-12) vs. Eastern Kentucky with a pair of runs scored and three RBI.  Bright is hitting .444 (12-for-27) and has hit safely in all seven games.  He has an eight-game hitting streak going back to last year.

JACK OF ALL TRADES

Sophomore left-hander Jack Wynkoop pitched 7.1 scoreless innings and struck out a career-high 10 batters in Saturday’s 2-0 win over the Colonels.  He allowed just three hits and one walk.  Wynkoop leads the Gamecocks with 16 strikeouts in 12.1 innings.

Junior catcher Grayson Greiner’s two-run homer was the key hit in the 2-0 victory over EKU.  Greiner has started all seven games behind the plate and is hitting .320 (8-for-25) on the year with a pair of homers and 10 RBI.  He and Bright lead the team with four multi-RBI games.

Junior right-hander Joel Seddon made an appearance in all three games vs. EKU closing out each contest.  Seddon has seven strikeouts in 3.2 innings.  Last Saturday’s appearance earned him a save, his first of the season.  He has retired all 11 batters he has faced in four relief outings.

Junior right-hander Cody Mincey appeared in all four games last week and leads the SEC with five total on the year.  Mincey worked a scoreless 1.1 innings to close out Tuesday’s 4-0 win over Presbyterian with three strikeouts.  He followed that up with another inning in the 4-0 win on Friday.  On Saturday he retired the lone batter he faced and Sunday he struck out bot the batters he faced.

Mincey has nine strikeouts in 4.1 innings.

Martin’s first weekend vs. Bucknell was impressive including a career-high four hits in the 12-0 victory.  Martin went 4-for-4 with two runs scored and a RBI in the series finale.

Junior infielder/outfielder Joey Pankake was 1-for-3 with two runs and a RBI in the 6-0 win on Sunday.  Pankake is hitting .292 (7-for-24) with a team-high 12 runs scored.  His on-base percentage is .438 as he has drawn three walks and been hit by four pitches.

Both Greiner and Pankake are two of 60 players to be named to USA Baseball’s initial watch list for the 2014 Golden Spikes Award, given to the top amateur baseball player in the United States.

A LITTLE BIT OF ENGLISH

Junior outfielder Tanner English hit .455 (5-for-11) in the Bucknell series and drove in a career-high five runs in the 12-2 victory over the Bison.  English tripled in that game, his eighth career three-base hit.  English now sits in a tie for seventh place on the USC all-time career list.

Sophomore infielder Max Schrock has a team-high eight walks and a .469 on-base percentage in seven games.  Schrock homered in Friday’s 4-0 win, his second homer of the year.  He has scored 10 runs this year.

Schrock tied a school record with four walks in a game in the first game of the doubleheader vs. Bucknell.  He would add two stolen bases in the nightcap and homered in Sunday’s series finale.

He also leads the team with three stolen bases.

AT THE PLATE AND ON THE FIELD