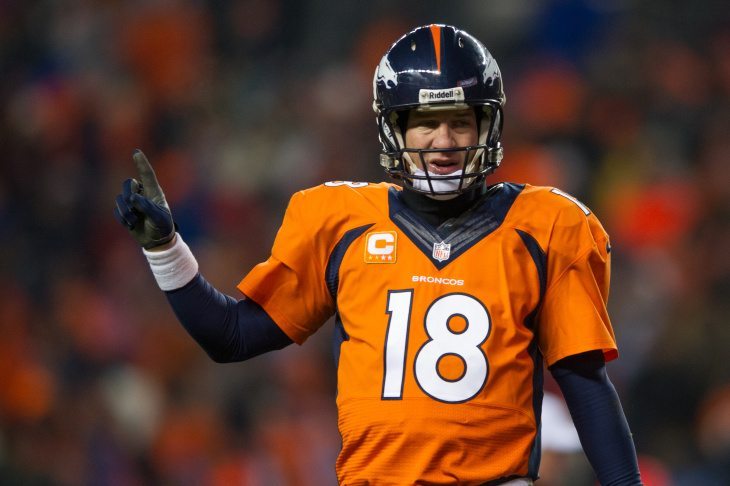 As a longtime Peyton Manning man-crusher, Super Bowl XLVIII was painful for me to watch. Don’t get me wrong, I’m not especially partial to the Denver Broncos (nor was I particularly averse to the Seattle Seahawks). I’ll always cheer for my beloved Indianapolis Colts … but if they couldn’t win the big game this year, I was rooting for Manning to pick up his second ring.

Boy did that ever not pan out … as the smack-squawking Seattle Seahawks turned several early Denver miscues into a 43-8 Super Blowout.

Love ’em or hate ’em, the Seahawks talked the talk … then they walked the walk. Meanwhile Manning – who turned in the best season by any quarterback in NFL history – was reduced to the derisive mocking by legions of amateur photoshoppers.

Manning set a Super Bowl record with thirty-four completions … and yeah, if you had told me (or anyone) he’d do that before the game, I would have bet the farm on Denver. Hell, I’d have bet several farms I didn’t own.

A miscommunication on the first offensive play of the game – an errant snap by center Manny Ramirez that sailed past a wide-eyed, panicked Manning – set the tone for the game.

“It was real loud, none of us heard the snap count — I thought I did,” Ramirez said.

He didn’t … and this early wrong foot forward quickly turned into a complete and total collapse. The Broncos had fallen, and they couldn’t get up. Seattle’s top-ranked defense simply wouldn’t permit Denver’s record-setting offense to find anything resembling a rhythm … and when a deflected Manning pass was returned for a touchdown by XLVIII MVP Malcolm Smith with three-and-a-half minutes left in the first half, the Broncos were down 22-0 and in full-fledged meltdown mode.

A failed fourth down conversion on Denver’s ensuing possession – followed by a kickoff return for a touchdown by Seattle’s Percy Harvin to open the second half – and the game was over.

“It’s not embarrassing at all. I would never use that word,” Manning said. “The word ’embarrassing’ is an insulting word, to tell you the truth.”

Maybe it is insulting … but as much as I love Manning (and I love him a lot), it fits the effort he and his teammates put forth.

Denver came out shaky. Then they got spooked. And then they got steamrolled. It was embarrassing …  no matter what Manning thinks of that word.

Now … does a such a soul-crushing loss on football’s greatest stage detract from Manning’s legacy? Of course it does. But let’s keep things in perspective: There is still an incredibly compelling case to be made that Manning is the greatest signal-caller in NFL history.

In fact I think it’s an ironclad case … or will be over the next two seasons if he continues to play.

Manning currently trails only Brett Favre in passing yards and touchdowns – and assuming he keeps playing at his current level he should break the latter record next year and the former record sometime in early 2015. Manning is also only 19 wins behind Favre’s record of 186 career victories, another mark he could easily surpass over the course of the next two seasons.

Favre is 1-1 in Super Bowls with zero MVP awards in the big game. Manning is 1-3 with one MVP award. Manning also has a record five MVP awards during the regular season, compared to three for Favre.

Had Manning never won the big game – a la Dan Marino – I could see the case being made for someone else. But he has.

Sure, Favre, Marino, Tom Brady, John Elway, Joe Montana, Drew Brees, Fran Tarkenton … they all belong in the conversation (and in Brady’s case the combination of numerical prowess and postseason success is pretty damn impressive), but Manning’s numbers are just too good. And have been for too long.

One bad game doesn’t change that … no matter how much some Seahawks squawk.

Speaking of squawking … hats off to Seattle cornerback Richard Sherman. The brash defensive back – who became a household name after his aggressive trash talk following the NFC championship game – took to Twitter to defend Manning following the Super Bowl.

“Peyton is the Classiest person/player I have ever met!” Sherman tweeted. “I could learn so much from him! Thank you for being a great Competitor and person.”

Who do you think is the greatest quarterback in NFL history? Post your thoughts in the comments section below …

Clemson Ranked No. 13 By Baseball America