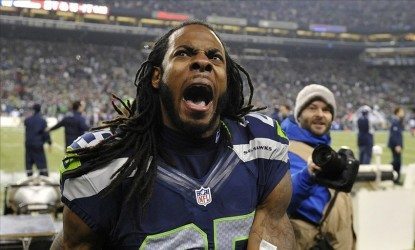 Seattle Seahawks’ cornerback Richard Sherman may very well be the best defensive back in the National Football League … but he added a disappointing chapter to his legacy following Sunday night’s NFC championship victory over the San Francisco 49ers.

In a post-game interview with Fox Sports’ sideline reporter Erin Andrews, the third-year pro aggressively tooted his own horn – then went after one of his vanquished foes, 49ers wide receiver Michael Crabtree.

“I’m the best corner in the game! When you try me with a sorry receiver like Crabtree, that’s the result you’re going to get,” Sherman screamed at Andrews. “Don’t you ever talk about me!”

Asked by Andrews who had talked about him, Sherman made it abundantly clear who he was referring to.

“Crabtree! Don’t you open your mouth about the best, or I’ll shut it for you real quick,” he screamed, calling out the letters “LOB” for the Seattle Seahawks “Legion of Boom” secondary.

Wow. Even before all the post-game jawing, Sherman – whose pass deflection sealed the Seahawks’ win (sending the team to Super Bowl XLVII) – received a personal foul penalty for taunting Crabtree.

So … why all the angst?  Apparently Crabtree made a remark last April at a charity softball game in Scottsdale, Arizona that offended Sherman – who promised to “make him pay.”

Good Lord … where is Grantland Rice when you need him to put all of this in context for us? Sherman, 25,  hails from Compton, California – home of gantsa rap.  Of course he holds a degree from Stanford – in communications, no less.

Sherman will have a chance to prove he’s the best in the game two weeks from now when the Seahawks meet Peyton Manning and the Denver Broncos. Manning broke the single-season NFL touchdown record this year – and will be looking to win his first league championship since guiding the Indianapolis Colts to victory in Super Bowl XLI.