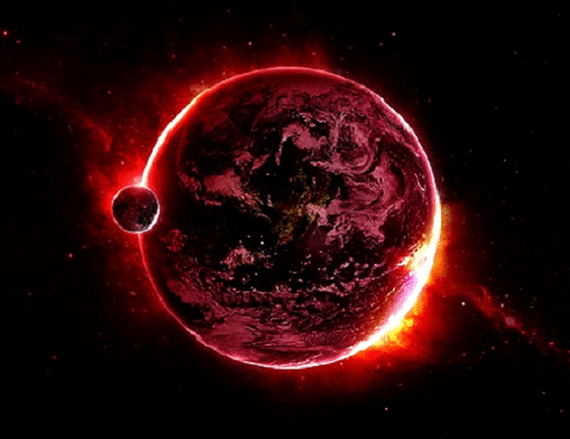 An object as large as the sun is hurtling toward the planet earth on the wings of a comet – with the date of our planet’s demise now firmly set for December 26, 2013.

Talk about a Christmas hangover … not to mention a major dent in college bowl season.

Anyway, after wiping egg off their faces following the Mayan Non-Apocalypse of 2012, Doomsdayers are back again with the Nibiru prophecy – which has its roots in ancient Babylonian and Sumerian mythology.

The latest manifestation of this theory holds that Niburu – planetary home of the Anunnaki (a.k.a. Sumerian Gods) – has been photographed by the U.S. Military’s Sun Earth Connection Coronal and Heliospheric Investigation (SECCHI).

The SECCHI images – taken last week – show a massive anomaly (a.k.a. “artifact”) which appears to be planetary in nature lurking just behind the comet ISON, which is due to pass 39.9 million miles from earth the day after Christmas. 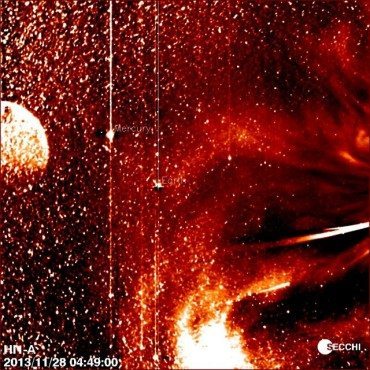 Meanwhile here’s a .gif file of the anomaly …

At this point it’s worth noting conspiracy theorists don’t believe ISON is even a comet, they think it’s a giant alien spaceship – and allege it has made several “course corrections” on its path toward earth.

Astronomers debunk that theory, though.

According to experts, “Nibiru” is really nothing more than a “lens flare” from the Pleiades star cluster – which is located approximately 135 parsecs from earth in the Taurus constellation. Or at least that’s what Sheldon Cooper told us …

Anyway, lens flares occur when images are overexposed (or not adjusted to account for light sources). They’re pretty common in satellite imaging. For those of us grounded to this terrestrial sphere, here’s a more a conventional example of one … 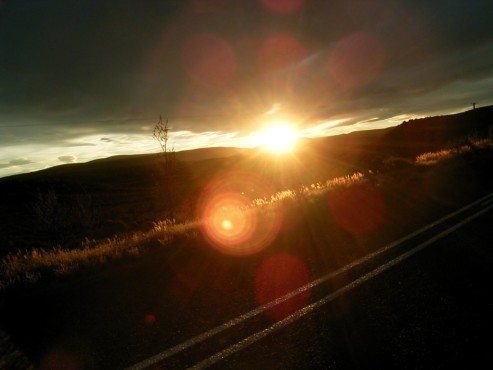 In other words, we’re probably not looking at a sun-sized planet bent on destroying humanity in a little over three weeks. Nor are we looking at an alien spaceship portending its imminent arrival.

Look, we get conspiracy theories. It’s a crazy world, and in addition to bankrupting us and stealing our liberties, our governments foment the craziness by flat out lying to us on a daily basis.

Hell, lots of people think FITS is a conspiracy website …

Unlike some people, though, we don’t think civilization will get “Nibiru’d” the day after Christmas … although based on its current trajectory we should be so lucky if that were the case.

Weird! Did anyone else get an erection upon “click(ing) to enlarge”?

WTF!!!! That’s weird, me too!
Maybe it has something to do with our Alien abduction and Alien implant?
I had a lady come in the other day for her semi-annual dental cleaning and checkup.
After the X-Ray, I told her she had a tooth which needded to be pulled.
She said, “I’d rather have a baby”!
I told her, “Hurry and make up your mind, I’ll need to adjust the chair”!
I’ll remember the click to enlarge the next time. Might not have to adjust the chair?

Yep, she now comes in for her bi-weekly!

Are these the same people that look for Bigfoot?

Lol so true, must be no Nancy Mace or Curtis Loftis “news” stories to regurgitate today.

Not sure how, but Obama is to blame.

He is the main reason shit happens , he’s the fuckin’ alien .

Well, it’s about damn time. That was supposed to happen 10 years ago. Now my fucking stash of food is out of date.

Now I have to rearrange my list of folks I owe money to. This is a great excuse to put those snarky relatives at the end of the list. Hah – hah..!!

Five effing times in a row!!

Wait ’til next year you cocky MFers!!!

That’s nothing. Rumor is FEMA Region III is the bullseye for Comet ISON debris. Run a line from FEMA Region III northwest to Seattle to be precise…and in the next four-6 weeks depending on earth rotations in orbit.

How ’bout City of Columbia rejecting the strong Mayor! LoL

OH MY GOD..!! There goes my wedding plans and honeymoon in Hawaii……

In the Book of Phlebitis the Macedonian, it clearly states, “..And on the 23rd day of the 12th Month, the Emperor declared that all should be enrolled. But no-one could find the enroller. And as error filled the land, a sign appeared in the heavens – a balloon made of the skins of virgin razorbacks, and as great as the sun. But no-one believed in the vision, and so it wandered away, muttering unto itself, that’s the last time I trust a frickin’ astronomer. And it was so.”

TBG is already prepping for the “Airing of Grievances”.

It would really be funny if one of the doomsday prophecies finally managed to come true – oh wait….

Everyone calm down! It is Rama, just like Arthur C Clark predicted!

Maybe the Heaven’s Gate comet is coming back for real. Time to lace up our Black Nike’s and cut our balls off!

Don’t forget to take a roll of quarters for phone calls – just in case!

Don’t forget to bring a pail of water and a catcher’s mitt!

Time to lace up our Black Nike’s and cut our balls off!

Finally! At last! In accordance with the prophesy!!!!

Y’all go ahead and start without me. TBG’s gonna make a beer run.

Agreed, according to ancient text the Annunaki came to earth approx 450,000 years ago. They created humans as a slave and till this day we the slaves are looking for our master…. Sounds real to me, I mean look around you. How many people to you see on the ground looking up into the sky praying for their master? Or trying to talk to their master? Plus what is the different between a master and a god? I look around me and see nothing buy slaves. People going to school to learn how to follow instructions. People needing to eat 3 times a day? The world we created says one thing. That thing is “work” or die… I don’t know about all of you, but I do believe we should have a birth right of living, and living requires us poor weak beings to have energy and food. But try to pay off a house, start a farm and see if you wont be forced into working. Lets say property tax? Can’t live for free anymore, thus we are slaves. Peaceful slave right now.

Every time I want to binge on crack, I get on the internet and find the latest end of the world prediction, so I won’t feel like I’m going to miss anything.

You all will see , shit will happen & you all will be the fuckin’ dumbasses out there . Let’s see who laughs in the end . BITCHES , EVERY MAN FOR HIMSELF , FUCK EVERYONE & KILL WHO EVER STANDS IN YOUR WAY !

ISON is now no more. Now what?

want be much longer