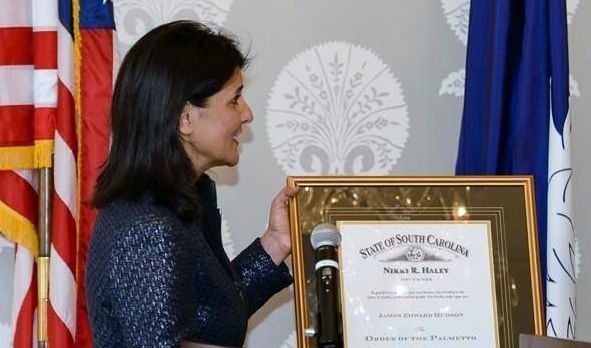 S.C. Gov. Nikki Haley is engaged in a bitter feud with Charleston Democrat Leon Stavrinakis over her decision to give the state’s highest civilian honor to a basketball coach – yet withhold it from a school teacher who stepped in front of a gun to protect her students.

Last week Haley presented the “Order of the Palmetto” to University of South Carolina women’s basketball coach Dawn Staley at halftime of the USC-Florida football game. Previously, Haley had refused to give the award to Mary Schweers – a teacher at Charleston’s Ashley Hall who confronted a mentally disturbed woman pointing a gun at elementary school students.

That disconnect enraged Stavrinakis – known around the State House as “Short Stack” due to his diminutive stature.

Stavrinakis went on to say that Haley “rejected” his request to give Schweers the award – which governors have been doling out (often like candy) since 1971.

“Dawn Staley is a fine, deserving person but Mary Schweers walked in front of a loaded gun pointed at kids in the hands of a crazy person,” he said.

Stavrinakis is making some serious hay of the issue in the Lowcountry, getting a big write-up on the dust-up in The Charleston, (S.C.) Post and Courier.

Sources tell FITS Stavrinakis’ hay-making is paying dividends – and not just with Democrats, either.

“Charleston folk are steamed about this,” one source told us. “Mary Schweers is the wife of a very popular Republican Charleston County Council member who is one of the only members who consistently votes against big government.”

Another added Haley has “alienated a lot of limited government supporters” with her decision.

Frankly we think the Order of the Palmetto – like all government subsidized awards – is a total waste of money. The whole program should be scrapped, in our opinion. But we’re happy to pop some Orville Redenbacher’s and watch Haley and “Short Stack” do battle.