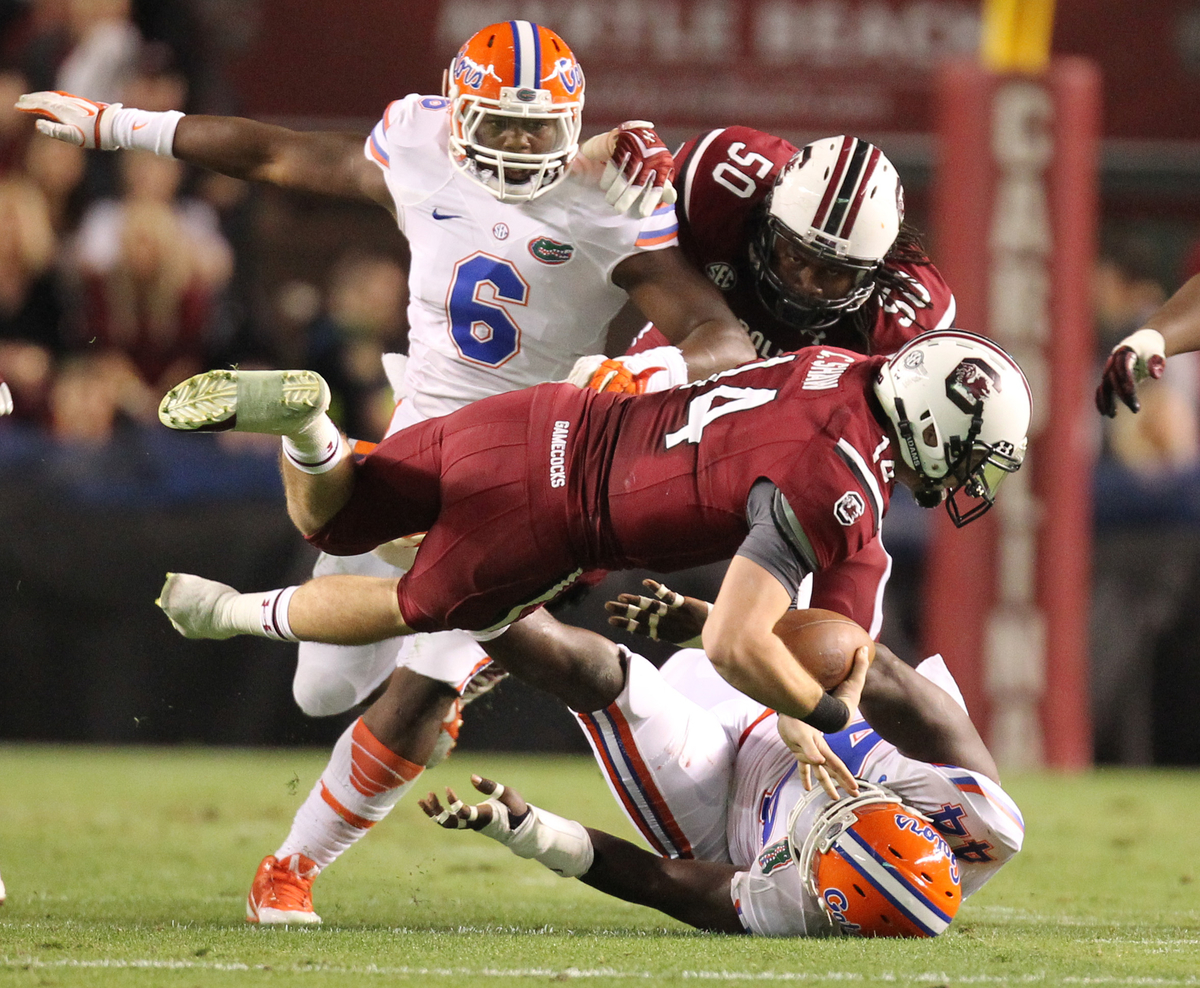 The University of South Carolina football team certainly didn’t play like everything was on the line Saturday night at Williams-Brice Stadium … but an uninspired effort against the unranked, undermanned Florida Gators wound up being enough to keep their conference championship hopes alive anyway.

The tenth-ranked Gamecocks (8-2, 6-2 SEC) turned in their worst offensive performance of the season – as senior quarterback Connor Shaw struggled to find open receivers and sophomore running back Mike Davis struggled with injuries.

Shaw completed just 14 of 28 passes for 213 yards with one touchdown – a 32-yard strike to Bruce Ellington on a fourth down play early in the third quarter that wound up being the team’s only touchdown of the night.

Davis – the SEC’s leading rusher – was held to just 54 yards on 13 carries although he missed most of the second half with a leg injury.

Still, thanks to four field goals from freshman kicker Elliott Fry – and a 102-yard rushing performance from backup running back Shon Carson – South Carolina eked out a 19-14 victory over embattled head coach Will Muschamp’s Gators (4-6, 3-5 SEC), who began the 2013 season ranked No. 10 in the nation.

More importantly, South Carolina did what it had to do to stay in the hunt for a shot at the SEC Championship Game on December 7 in Atlanta, Georgia. In fact the Gamecocks’ win (coupled with the University of Georgia’s heartbreaking 43-38 loss to Auburn) means USC can claim its second Eastern Division championship in four years if ninth-ranked Missouri loses either of its two remaining conference games.

South Carolina owns the tiebreaker against the Tigers (9-1, 5-1 SEC) by virtue of its thrilling double overtime victory in Columbia, Missouri last month.

South Carolina plays Coastal Carolina next week before wrapping up its regular season against arch-rival Clemson. Both of those games will be at home.

While concerns abound about the Gamecock offense, USC’s defense settled down nicely after giving up a pair of big early touchdown runs to Florida running back Kelvin Taylor (son of NFL great Fred Taylor). In particular Jadeveon Clowney – whose 2013 season hasn’t been the non-stop highlight reel Gamecock fans had hoped for – turned in perhaps his best game of the season.

Clowney had five total tackles including two for a loss and played at a high level despite injuring his foot during the half.

Mornhinweg completed 10 of 13 passes for 107 yards in his first career start for Florida – which has seen its top two quarterbacks (and numerous other impact players) go down with injuries this season.

(Courtesy of award-winning photographer Travis Bell, below are some images from the game. Click on each thumbnail to enlarge …) 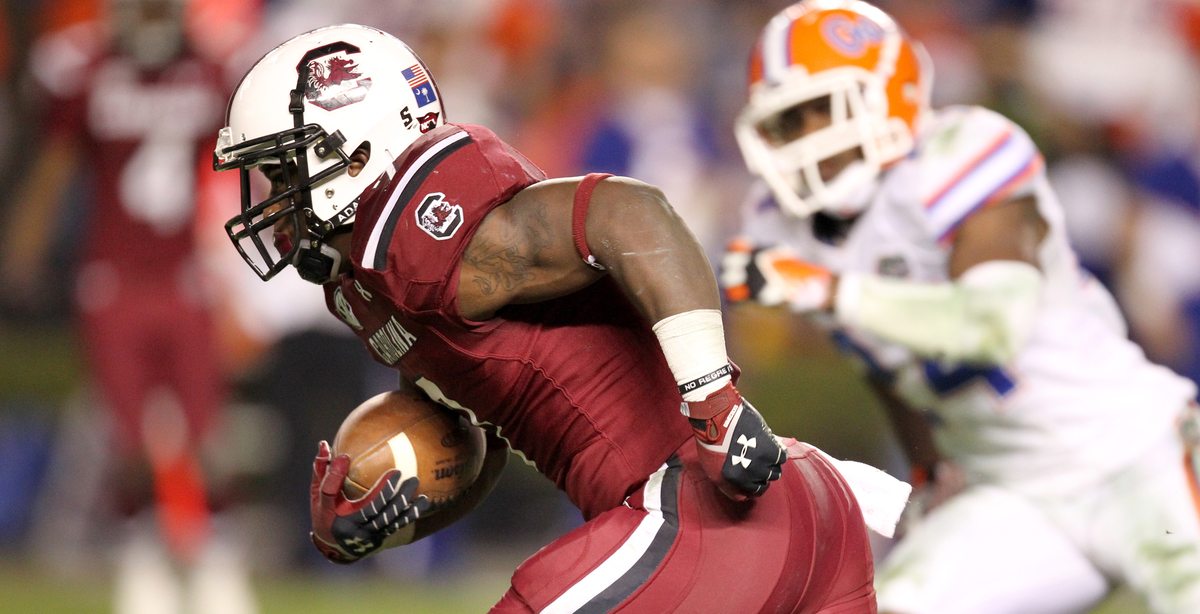 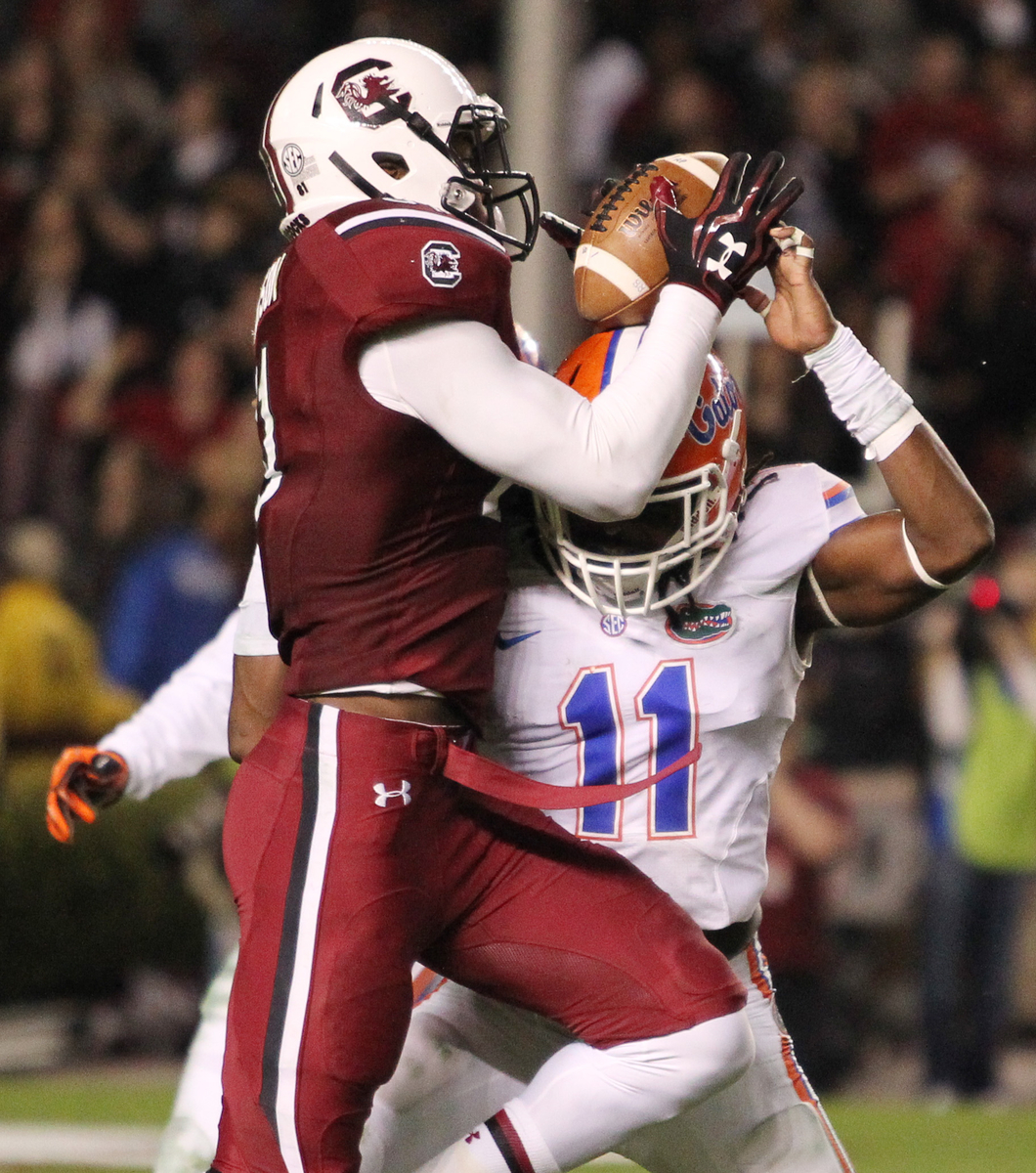 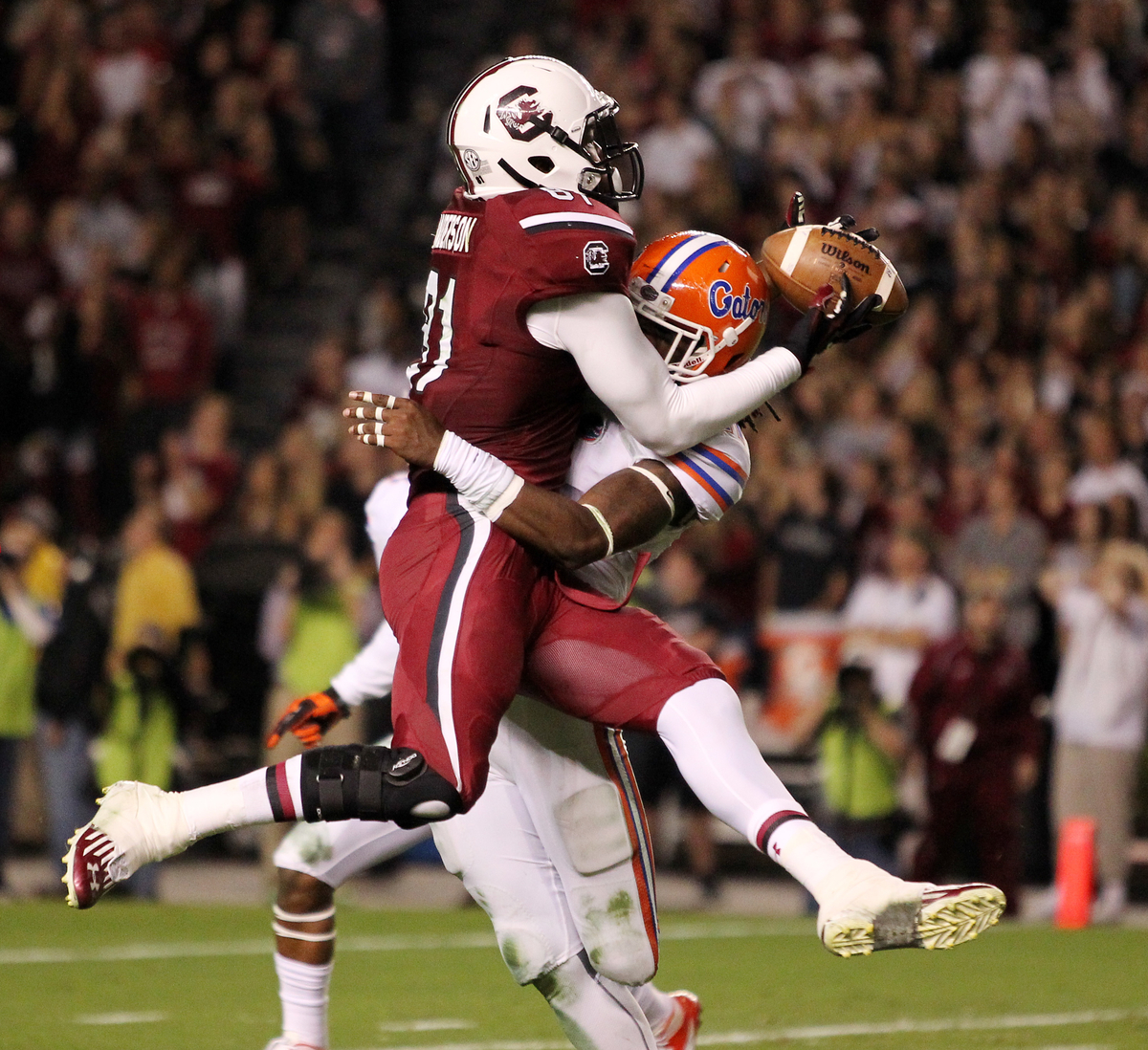 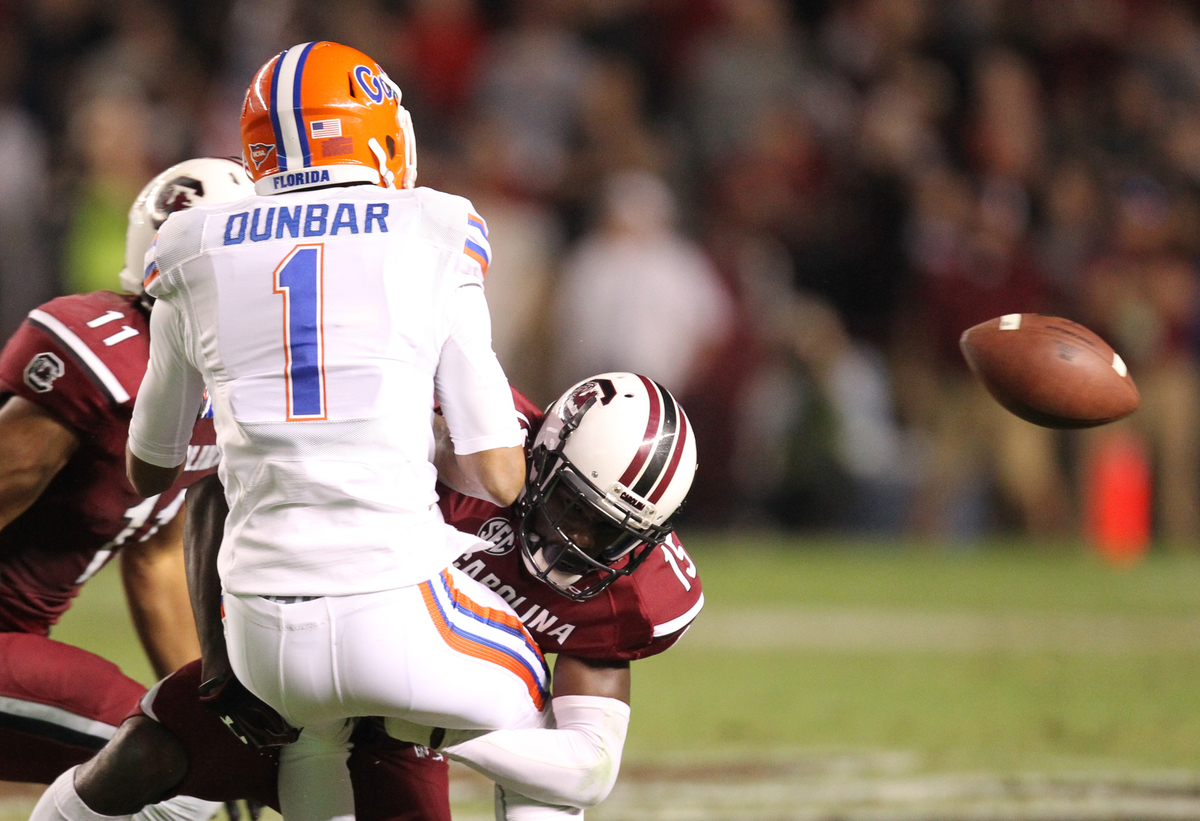 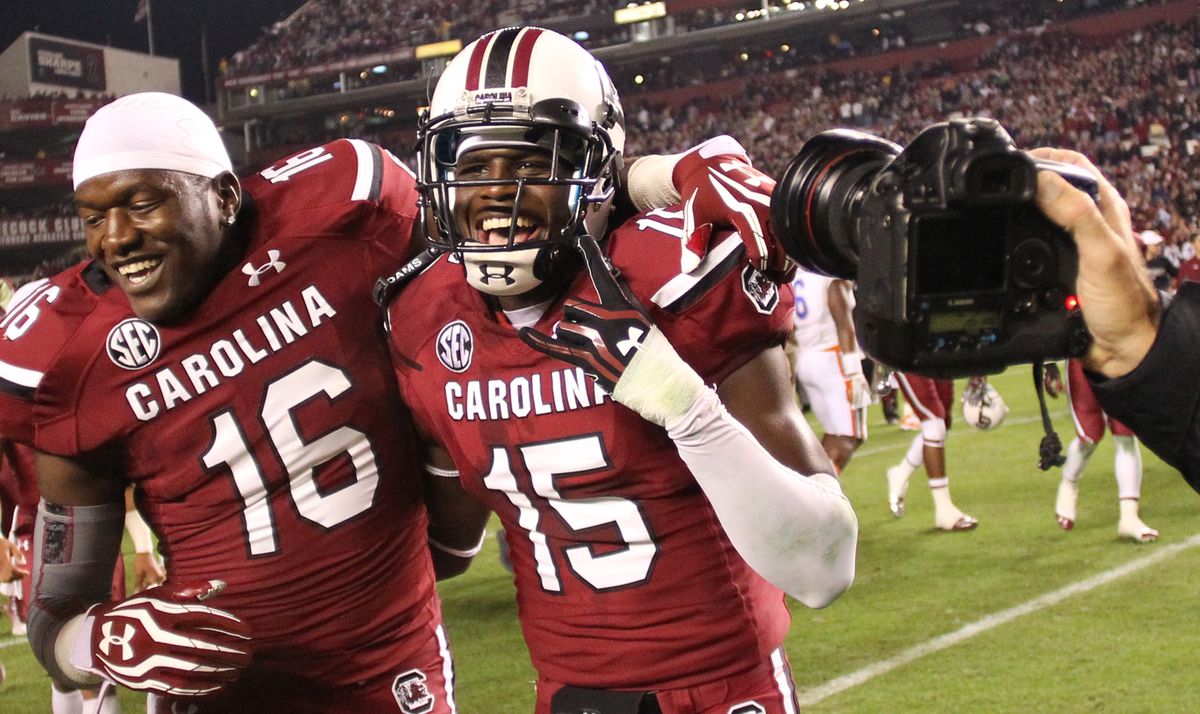 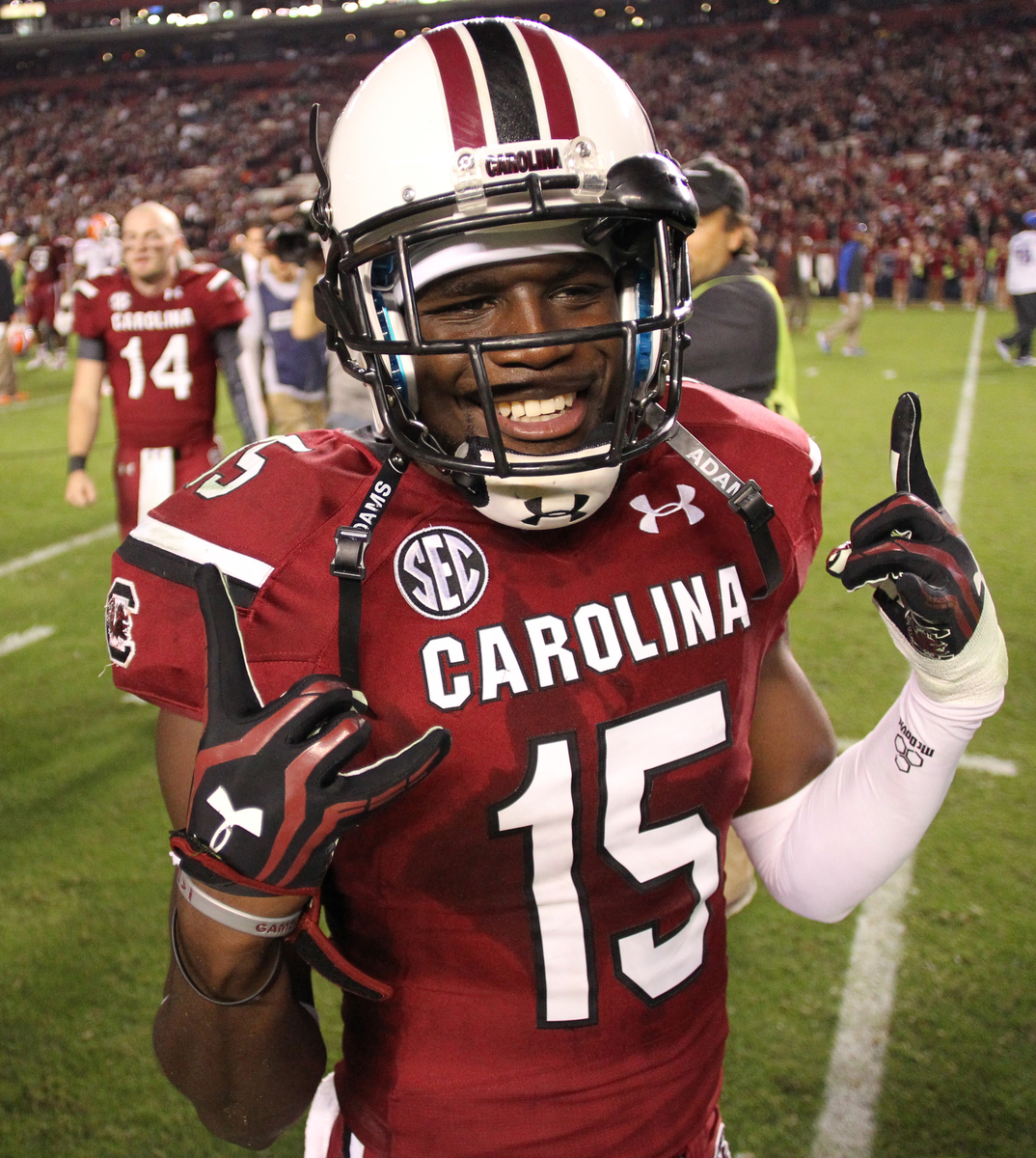 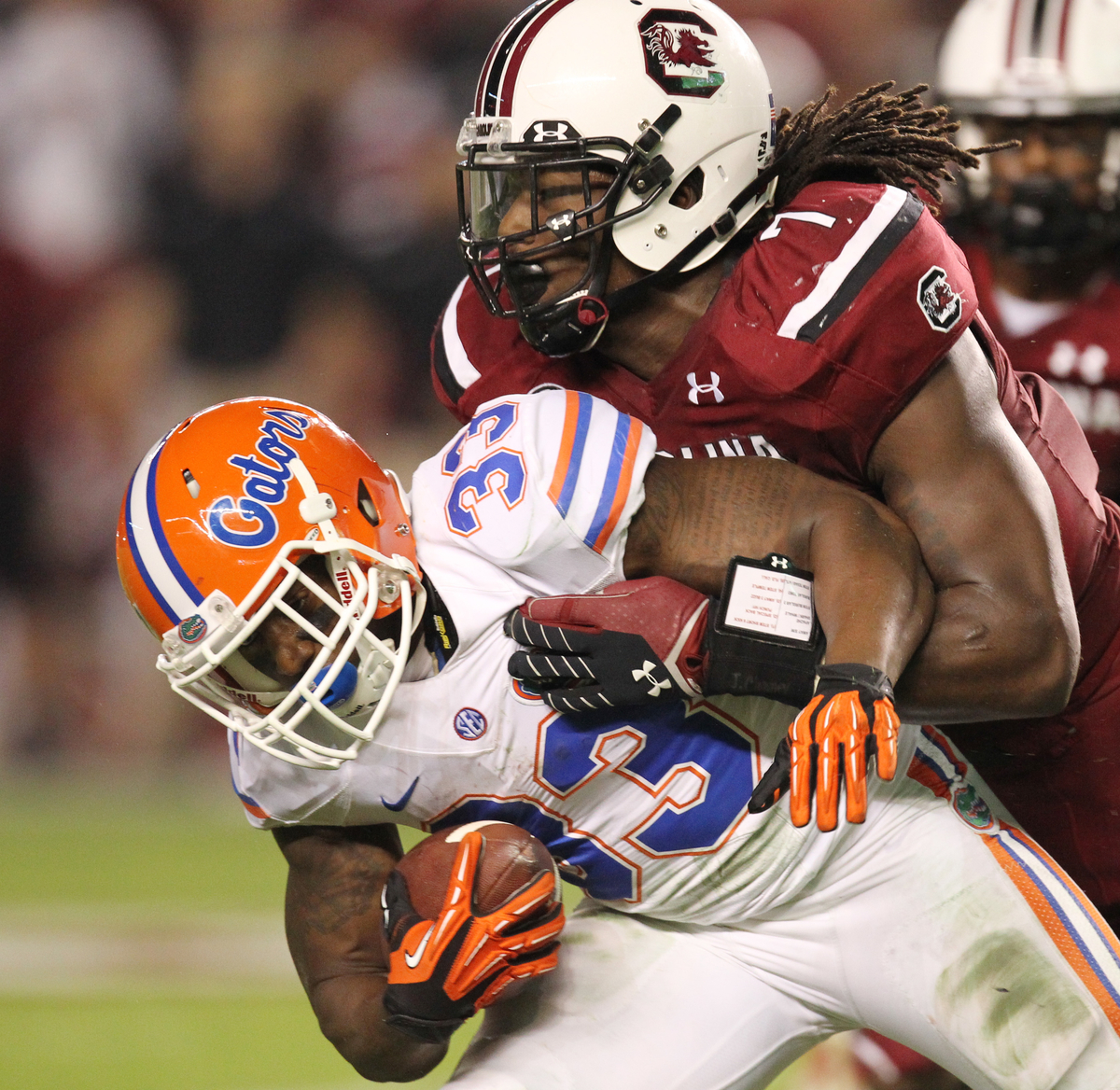 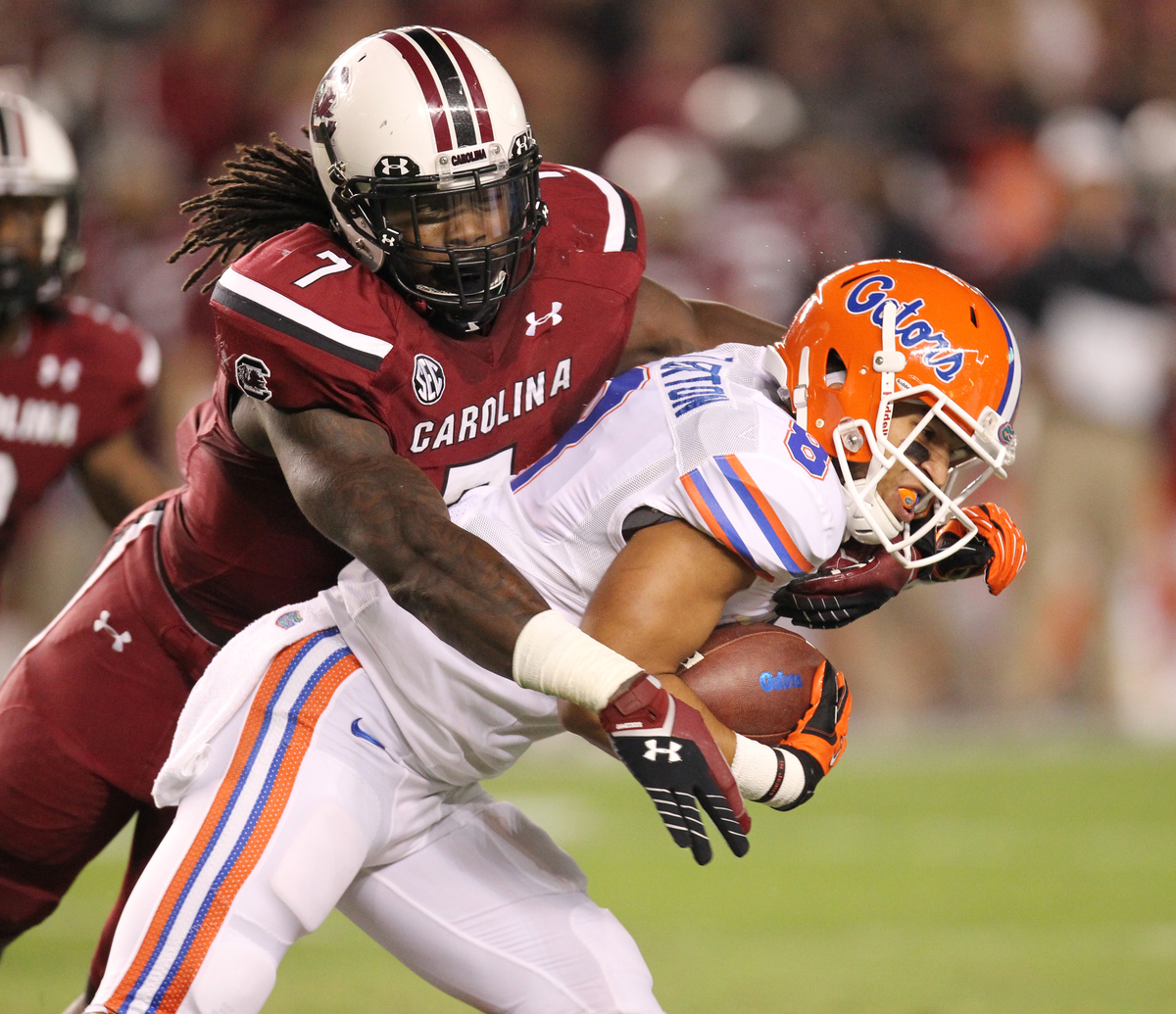 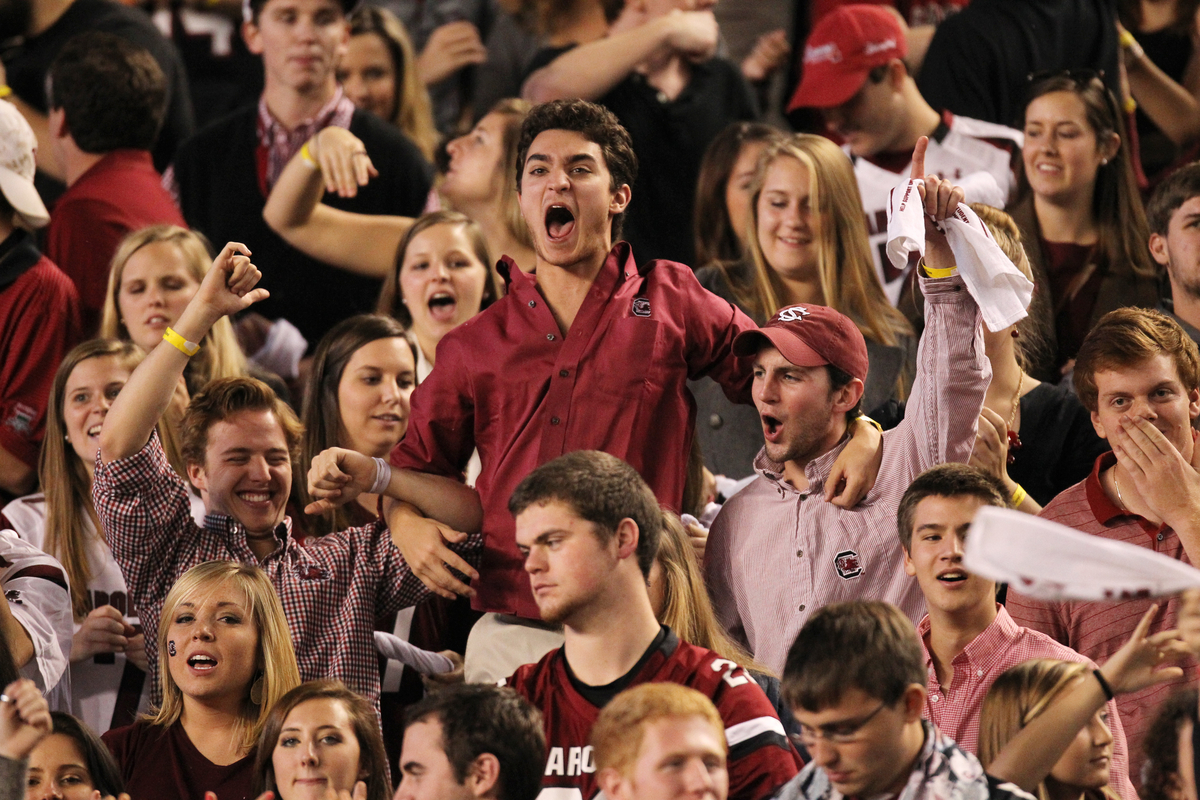 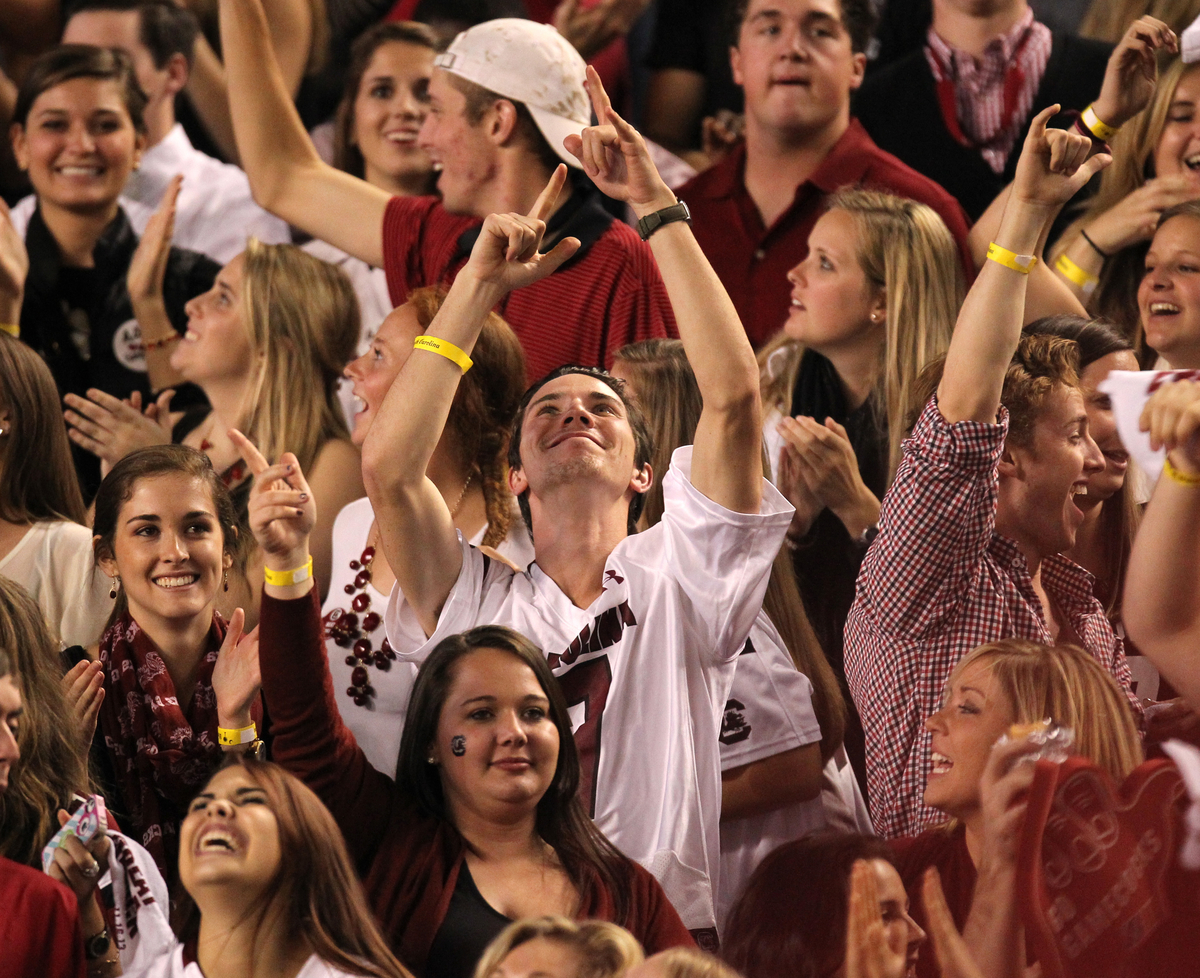 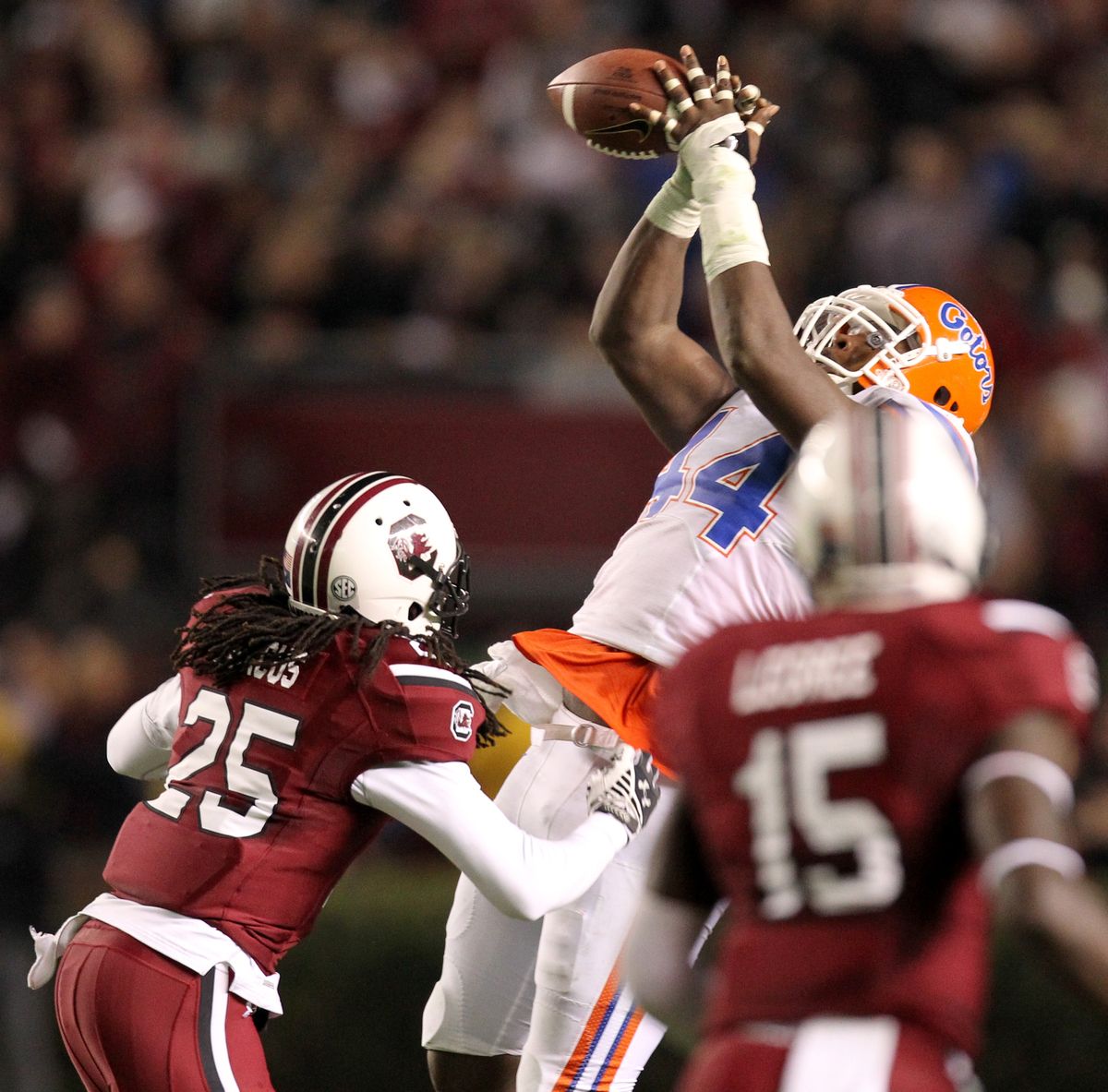 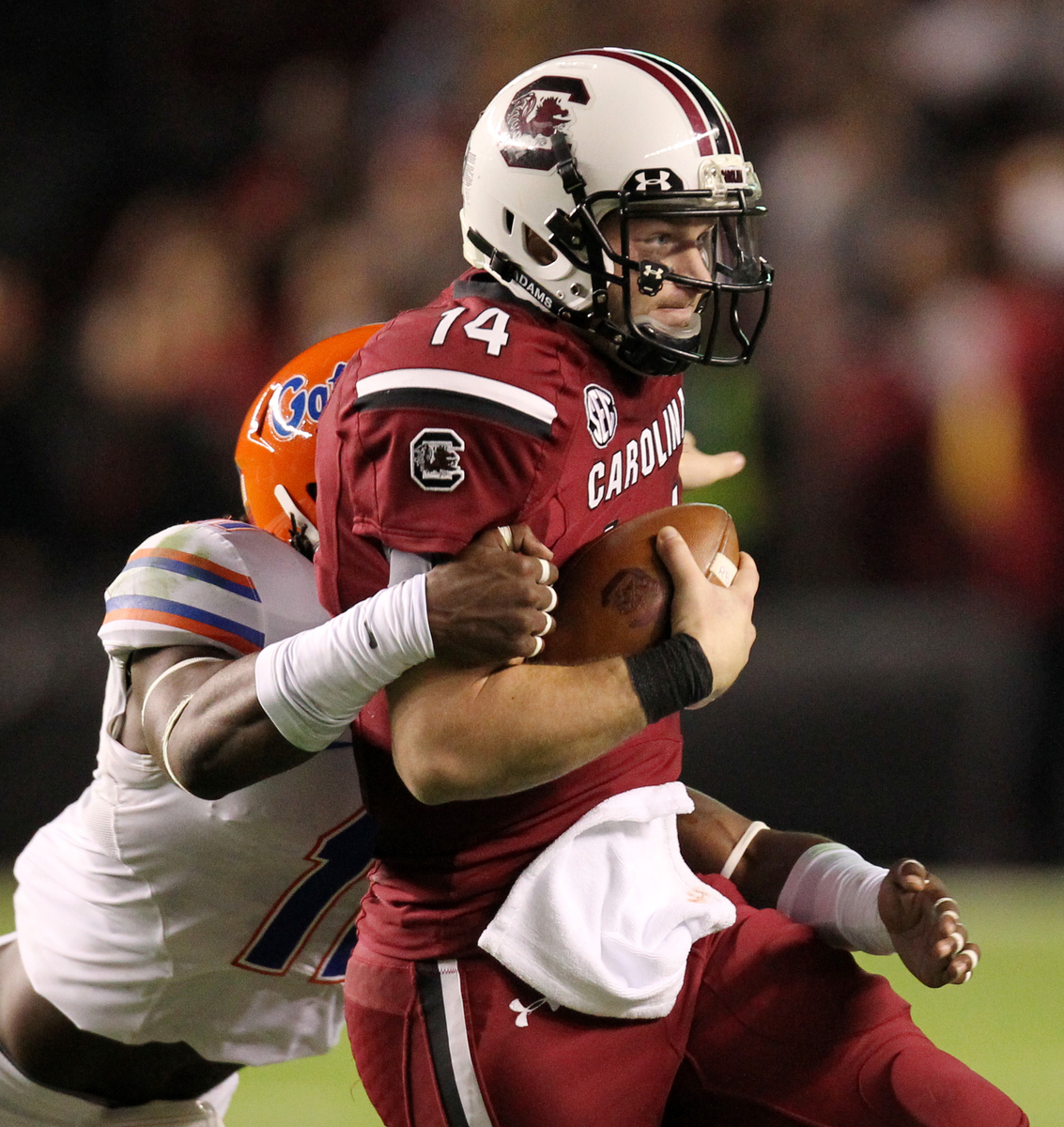 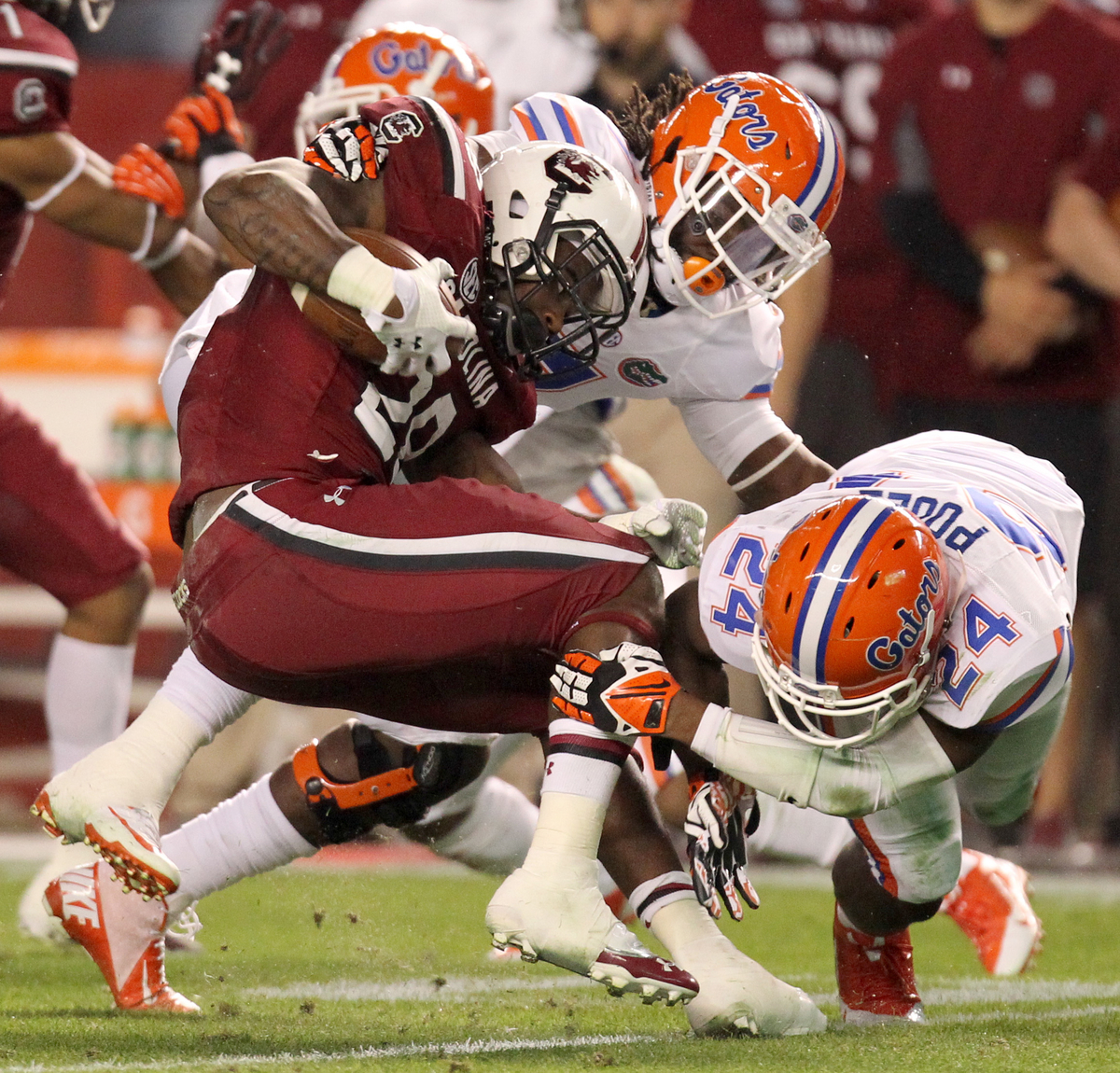 SEC Play Of The Year?

They now just need Missouri to lose and then on to Atlanta for the honor to get beat up by Alabama.

Probably so, but at least they may get a shot. Stranger things have happened in college football.

Football has become the opiate for the masses.

In most cases, a lot of these young men don’t hail from the state they are playing for.

I agree, football in general has turned a corner. People talking about long term effects of years of tackles and hits, college football players who are in school for the sole purpose of playing football rather than an education, etc.

Parents are starting to realize that as the play becomes faster and players are getting bigger the abuse their children are taking has a long-term effect. They’re pushing their kids away from football to other sports. Nobody wants their child physically or mentally crippled by the time they’re 50 years old.

College athletes are showing up on campus not prepared for the academic requirements of a college student. It’s not uncommon for them to not qualify at first but to get accepted through the university’s special admission committee that overlooks their academic record and admits them based on other accomplishments, some athletic, some music, some because English isn’t their first language. College athletes who are accepted through this committee typically end up being pushed by advisors to “worthless” degrees. They aren’t pushed to Engineering, Accounting, Business Administration, Nursing, etc… They get placed in courses for Sociology majors, African American Studies majors, Retailing, etc… They are given tutors, note takers, test readers, required study hall and many still have difficulty staying academically eligible. If they do actually graduate, they have no work related skills or a degree that employers actually want or need.

I believe it’s be better if NCAA football became more like the farm clubs of MLB or NHL. You don’t dilute the academic integrity of the university, you give the athletes a bearing of where their future is headed. Those who want to play sports go through a farm club, those who want to do something other than play sports they go through college just like any other college student.

Sheesh . . . Debbie Downer strikes again. You may have a couple of valid points but many of them are gross overgeneralizations – and some downright falsehoods. I know many former football players well past 50 that are not “physically or mentally crippled”. There are tons of scholar athletes who do well academically. I would bet there are more non-athletes than athletes that could be described by what you posted about academic performance in college – college football players and collage athletes in general are certainly not the only ones “diluting the academic integrity of the university”. Not sure where you get your info but I disagree. There is much to be said about the value of team sports – football included – and the lessons learned by participating. And finally, based on your past posts to this forum I was certainly not surprised at all that you mentioned “African American Studies”. Sounds to me like you are some wimpy, uncoordinated white guy with a case of sour grapes.

I’m a white, athletic, Honors graduate of SC’s finest Institution of Higher Learning. We used to park the weaker athletic intellects in the Parks, Recreation, and Tourism major, the Sociology major, or the Administrative Mgt. major. Blacks and whites were parked there.

I know of few ex-football players, college and many times, HS, who are not physically diminished in some manner or another, myself included. A starting catcher in baseball for 4 years and a Tailback in football for 3, my hips give me hell everyday. No way a son of mine would play football (I have only a daughter). My contemporaries, like myself, steer their kids to soccer and golf, or perhaps, baseball.

I agree there are more accomplished student athletes than not, but I also agree that we have diluted the broadness of curriculum representation in college athletics. PRT, Af. Am. Studies, Sociology, Criminal Justice; what difference does it make if its true?

I have fraternity brothers who were All Conference and All American athletes that are PHD’s, Chemists, Doctors, Lawyers and Business Millionaires. I have those whose careers mimicked there lack of academic acumen as well. All from the same pool of generally agreeable and socially bonded group of men.

I have watched the scholarship athlete progression move from the rural farms and the mill hills of SC. to the loading docks of New Jersey and Maryland and the steel mills of Pennsylvania, and factories of New England. The most recent past and current iteration of college athletes are heavily made up of young black men and hispanics who find their way out of difficult circumstances to become the first of their families to attend or graduate college, just as their predominantly white predecessors did.

It’s all good, but it doesn’t change the facts that many slip through the cracks and don’t get the complete fulfillment of the college opportunity.

Thank you sweepin for your great post – everything that you post has the ring of truth to it. I never participated in high school or college athletics and am well past 50. I have many physical ailments and aches and pains – including age-appropriate arthritis. Dementia and Alzheimer’s is rampant in our country among the 50+ age group – sometimes appearing in the less than 50 year olds – I have no idea what percentage of the afflicted played high school or college athletics. I think we need to be careful in leaping to certain conclusions. Since this issue has been in the news lately I could not even help but wonder if some (certainly not all) of these retired NFL players that are now suing for damages are trying to make some money now that their multi-million dollar contracts are over.

Many players you speak of didn’t have multi-million dollar contracts. Many players today make more in one year than those guys did in their entire career.

Thank you, I forgot about the Recreation majors… we called them Kickball majors.

Take a look back 30-40 years ago, most players back then knew they had to look at Plan B because they were likely not going to go pro. Take a look today, every player thinks and plans for their pro career even though the same percentage of players actually make it. Why aren’t these same players today looking at Plan B and getting a degree that will actually put you above the poverty level after graduation?

Exactly why I spoke of my brothers and their successes. None of them went pro for a career. You’re right. They did have plan B; but during my tenure (early 70’s) the pendulum began to shift toward special admittance and easy majors, both white and black. Too many, and more today than in my era, slip through the cracks.

So what year did you graduate from College of Charleston?

Ha, I’ll not give you that one! My small rural community next door neighbor and good friend is now a Dr. thanks to CofC and Med. Col. of SC. If he’d gone to the finest, he’d own the hospital now!! Hahaha!

Actually I played Div II basketball on a full scholarship. None of my former teammates, like many others at that level, were admitted through anything other than their ACT or SAT test score and high school GPA. I work at USC and have firsthand knowledge how the system at the Div I and in this school works. Why are you suprised at the African American Studies major comment? Do many of the football and basketball players not take these courses or major in this degree?

It’s better than becoming a politician.They’re ‘mentally crippled’ as soon as they take the job.

Well most in SC did go through USC Law School, that can place part of the blame.

All together now…”Clemmmson,Bummmkin…….NOT, Climpson, Bumpkin” The “p” is silent. Ok, let’s try it again,”Clemmmson, Bummmkin” That’s much better.

I truely hope Clemson beats the shit out of these shit kids. God fucking forbid that I see some frat fool holding up five fingers…I’ll fucking snap! SNAP!!!

Some people taking a game way too seriously, I know people who’s whole lives revolve around USC and Clemson sports, like in reality it has any outcome or matters in the real world.

With the other hand they’ll be able to count to ten.

— and with zipper down, to eleven.

With USC fans unfortunately it’s still only to ten.

It appears that you already have. The good news is you won’t have to wait for THE game, you’re where you thought you’d be!!

Remind me of the score of the 2010 Carolina – Alabama game? Wasn’t that Alabama team ranked number 1 going in to that game.
Boy and girls, the reason we play the game is cause anything can happen.

“Even a blind squirrel will find an occasional nut.”

USC should send a gift basket to the referee group from that game for ignoring the holding and PI calls. I especially like the non call toward the end of the game with the USC O-lineman falling on the defender after holding him by the jersey.

Come on Norma, USC did not play Florida last night.