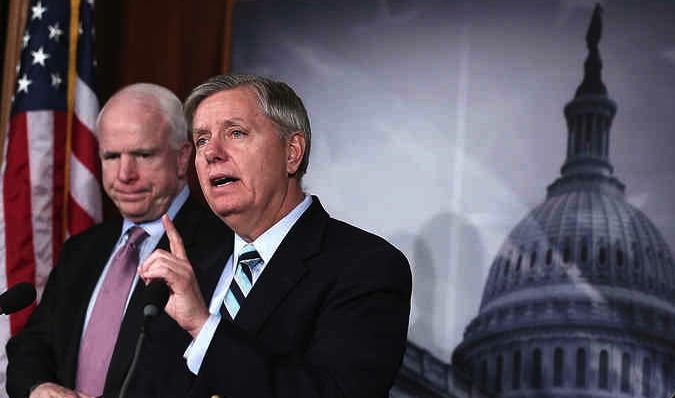 “I proudly voted to defund Obamacare, and I am proud that every Senate Republican has united in support of the House-passed defund Obamacare provision,” Graham said over the weekend. “I only wish that more Senate Democrats, many of whom were responsible for Obamacare’s passage into law, would have voted with us.”

“I fought and voted against Obamacare in 2010,” Graham added. “Since then, I have tried to stop the law’s implementation any way I can.”

Any way, that is, except actually stopping its implementation – which Graham could have done had he (and 24 other “Republican” Senators) stood firm with fiscal conservatives like Ted Cruz, Rand Paul, Marco Rubio and South Carolina’s own Tim Scott.

Instead Graham voted (again) with the liberal wing of the GOP on a key procedural vote – permitting Democratic leader Harry Reid to advance a budget resolution which included funding for Obamacare (setting the stage for a partial government shutdown). Sure, Graham and his fellow “Republicans in Name Only” flip-flopped moments later and voted against the very bill they permitted to move forward – but by then the damage was done.

This “D.C. rope-a-dope” is old hat for Graham – who frequently proclaims his opposition to liberal Obama policies only to willingly move them through the Senate on critical procedural votes.

You know … when he isn’t supporting these liberal Obama policies openly (here, here and here).

Fiscal conservatives have seen this “rope-a-dope” before – and aren’t buying it.

Graham and his fellow RINOs “have effectively allowed Obama, Reid, and (Nancy) Pelosi to move forward with their train wreck of a plan,” said Nathan Mehrens of Americans for Limited Government, one of the groups which successfully pushed the U.S. House to hold firm on defunding this increasingly unpopular law.

“In doing so, they can no longer claim that they are willing to do anything it takes to stop Obamacare,” Mehrens added.

He’s right … but that’s not stopping Graham from making the claim anyway.

“Clearly, Graham thinks you’re either so dumb that you won’t notice what he did, or he thinks you’re just too stupid to understand it,” writes columnist Robert Laurie. “There’s simply no other explanation for the shameless, bald-faced, crock of manure he’s been shoveling.”

Speaking of shoveling, Graham is unloading some of his $6.3 million war chest on a television spot in South Carolina that portrays him as an ardent opponent of Obamacare.

“So many of the talkers and bloggers are putting out so much misinformation about Lindsey’s record on Obamacare, we wanted to set the record straight,” Graham’s consultant Richard Quinn told FITS. “Lindsey Graham voted with House conservatives to defund Obamacare and he has been a conservative warrior against Obamacare from day one.”

Graham isn’t the only prominent South Carolina politician to waffle on Obamacare. S.C. Gov. Nikki Haley kicked off her 2014 gubernatorial campaign in the Palmetto State railing against the measure – but within the week a spokesman made clear she did not support the U.S. House plan to actually strip it from the budget.

With the exception of this website, Haley has yet to be called out for her hypocrisy …

Will Graham’s effort to redefine his position on Obamacare encounter similar success?

We’ll have to wait and see, but as we’ve noted on numerous prior occasions no one has ever lost an election in South Carolina by underestimating the intelligence of its people.