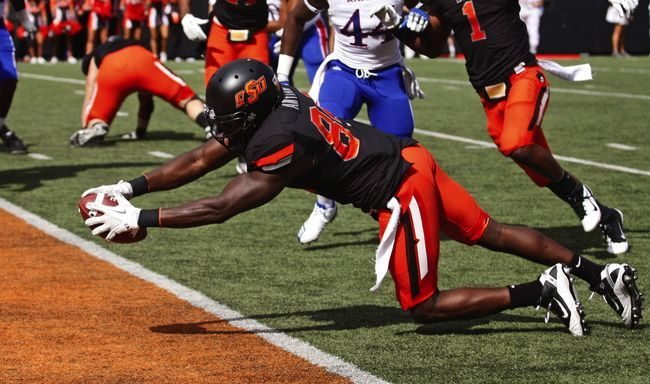 The Oklahoma State University football program has been accused of paying its players – the first of several looming allegations of “Cowboy corruption” leveled by an explosive Sports Illustrated investigation.

“In separate interviews (eight) former Cowboys told SI they received cash payments; 29 other OSU players were named by teammates as having also taken money,” the initial Sports Illustrated report notes. “Those payments, which stretched from 2001 to at least ’11, were primarily delivered three ways: a de facto bonus system based on performances on the field, managed by an assistant coach; direct payments to players from boosters and coaches independent of performance; and no-show and sham jobs — including work related to the renovation of Boone Pickens Stadium — that involved at least one assistant coach and several boosters.”

The impermissible payments allegedly took place during the tenures of current head coach Mike Gundy and his predecessor Les Miles, who went on to win a national championship as the head coach at Louisiana State University.

A bit of irony? Prior to this scandal, Gundy was best known for a rabid 2007 tirade in which he assailed the media for criticizing the play of his former quarterback, Bobby Reid.

“He’s not a professional athlete, and he doesn’t deserve to be kicked when he’s down,” Gundy said at the time.

According to the SI report, though, Reid was a professional athlete.

“Oklahoma State University is deeply troubled by these claims,” the school’s president said in a statement. “We will investigate the accuracy of the allegations and take all appropriate action.”

The school did question some of the allegations, though, saying they were “based on hearsay.”

OSU mega-booster T. Boone Pickens was critical of Sports Illustrated, saying its reporting focused on dated allegations that did not reflect the current status of the program into which he has poured tens of millions of dollars.

Oklahoma State is currently ranked No. 11 in the nation in the USA Today/ Coaches’ poll, No. 12 in the Associated Press Top 25.