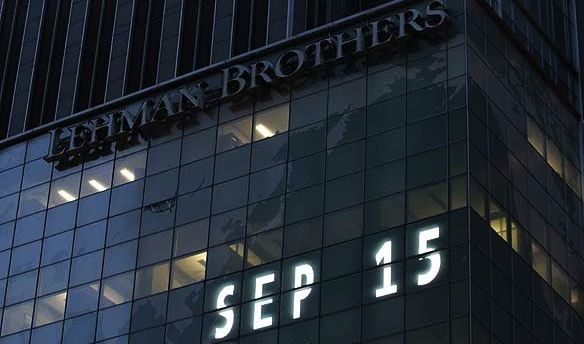 Former U.S. Treasury Secretary Henry Paulson says the world should prepare for another financial crisis, while Morgan Stanley CEO Jim Gorman views such an event is a virtual impossibility.

The conflicting views come on the fifth anniversary of the collapse of Lehman Brothers, with Paulson arguing systemic issues in the American banking system have yet to be resolved and Gorman arguing “dramatic” reforms to the system have been made.

“The probability of (it) happening again in our lifetime is as close to zero as I could imagine,” Gorman told Charlie Rose recently.

Really? Both of these guys are total interventionist/ crony capitalist jerk-offs, but we’re inclined to believe Paulson’s forecast.

America’s economy has never recovered from the last recession – which technically ended in mid-2009 but in reality is ongoing.

Case in point? In September 2008, America’s labor participation rate – which measures the percentage of the working age population that’s either employed or actively seeking a job – stood at 66 percent.

Last month? It had plunged to 63.2 percent – its lowest level since August of 1978. More than half a million Americans exited the labor force in August – bringing the total number of Americans outside of the national workforce to an all-time high of 90.5 million.

In the meantime politicians in Washington, D.C. of both parties have continued to kick the can down the road with regard to deficit spending and entitlement expansion (including the most onerous entitlement of them all, Obamacare).

Taxation and regulation are on the rise, as is the cost of living. What isn’t on the rise? Incomes.

Meanwhile the federal government is re-inflating the housing bubble and further inflating the student loan bubble (as if there were any decent-paying jobs out there for all those new college graduates to repay those loans).

Yeah … we’re gonna go with “another financial crisis is likely” on this one.

@fitsnews So many markets still propped up by faulty leverage plus trillions in derivatives that could blow up in an instant… It’s coming.

@fitsnews So many markets still propped up by faulty leverage plus trillions in derivatives that could blow up in an instant… It's coming.