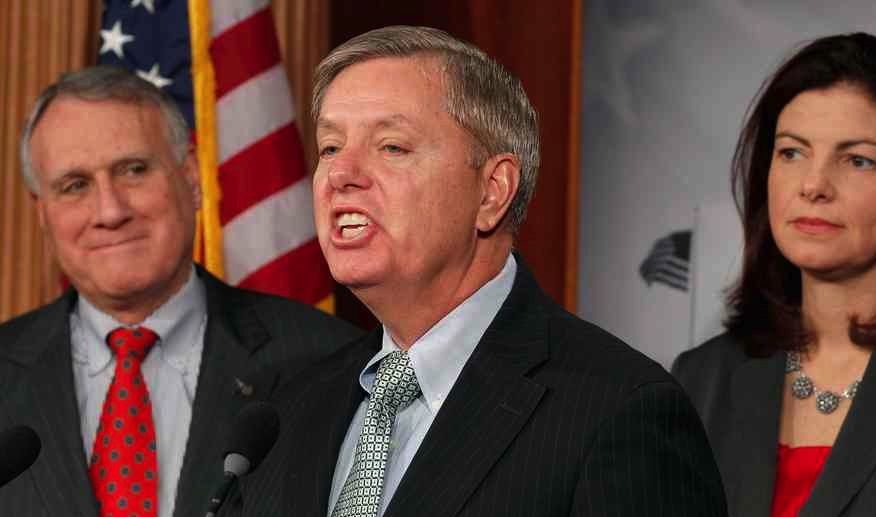 U.S. Sen. Lindsey Graham hates al-Qaeda … well, except when he wants America to partner with them in support of his failed interventionist foreign policy.

This week he hates al-Qaeda, though. For real. In fact he wants the group’s American-born spokesman, Adam Gadahn, to be killed as soon as humanly possible.

“Even though Adam Gadahn is an American citizen, he should BE subject to being killed or captured by our military and intelligence forces,” Graham tweeted this week.

Moments later, Graham fired off another tweet in which he argued that the native Californian should be killed immediately should the opportunity arise.

“The use of lethal force against American-citizen Al-Qaeda leader Adam Gadahn is appropriate and should be utilized without hesitation.” he wrote.

Wow … that’s pretty tough talk coming from somebody like Graham.

This isn’t the first time Graham has sought to deny American citizens their constitutional rights. Back in April he argued that Boston bombing suspect Dzhokar Tsarnaev should be held as an enemy combatant – even though the 19-year-old is a naturalized U.S. citizen. Prior to that he attacked U.S. Sen. Rand Paul (R-Kentucky) for daring to suggest that American citizens should not be the target of drone strikes by the U.S. military.

More recently, Graham has offered his full-throated support for the federal government’s Orwellian domestic spying program – which has targeted American citizens despite U.S. President Barack Obama’s promises to the contrary.

We agree with Graham that Gadahn deserves to die. He’s part of a terrorist network which has targeted and killed American citizens, and he should be held accountable for his crimes. That’s why we’re ardent supporters of the death penalty – as well as the Code of Hammurabi.

But whether we like it or not, Gadahn is an American citizen – which means he (like Tsarnaev) has a constitutional right to avail himself of the American judicial system. If that right is stripped away – no matter how contemptible the suspect is – the whole system falls apart.

More importantly, the sooner America stops injecting itself into foreign conflicts without a compelling national interest, reliable intelligence and clearly-defined objectives – the fewer Adam Gadahns we will have to deal with.

Next Sic Willie poll will be a yes/no on whether you have stopped beating your wife.

Snarl? I thought it was an ass braying.

Very Good! When Sic uses this photo again, you may have the honor of giving Linus a “chop”!

According to the information found in this article, what actions have YOU not taken yet..??

It is very telling by the response you have had in this very site’s comment section, how you will respond when you are in the Senate.

Nancy, you really need to get yourself in front of a mirror and ask yourself if YOU really want to win an election or not..!?

We gotta get rid of this jerk. He’s out of control! Needs psychiatric help.

In the coming reelection bid he’s going to be stroking his war boner quite a lot more. He’s trying to show off his “patriotism” to keep votes. Total scum.

Surely no politician has EVER told the electorate what he thinks they want to hear.

You least of all.

I am a politician? What office do I or did I hold?

The sonofabitch made it clear beyond any doubt that he isn’t the least bit interested in his, or anyone’s, rights or responsibilities as a US citizen. He was born here, but has effectively renounced the protection that practicing citizens can expect. He’s an enemy combatant. Why should we put good citizens at great peril to capture & return his traitorous ass for trial, years of appeals, martyrdom, etc. when he might be safely & economically turned into a pink mist by just one li’l drone strike?

The guy is a traitor and a spy. He is wanted Dead or Alive.
Even George Washington would have killed him.
No due process in time of war is required.

This is war, he’s a traitor: kill him on sight!

My God,look at him! He’s the reason they make glory holes.