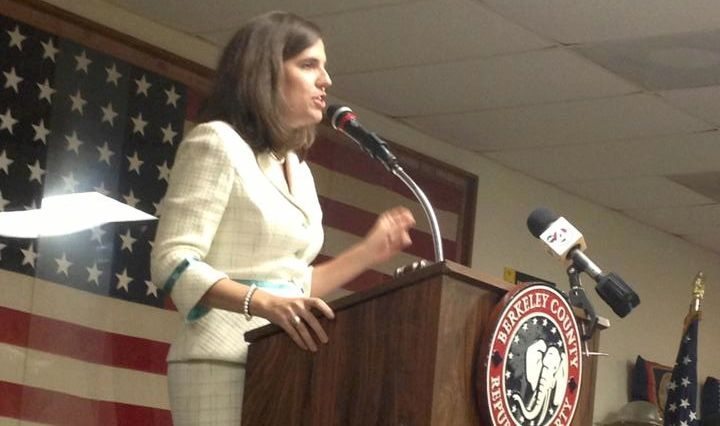 U.S. Senate candidate Nancy Mace’s performance on Glenn Beck’s national TV/ radio show is being panned by critics. In fact one has gone so far as to suggest the first female graduate of The Citadel – who is one of several Republicans challenging U.S. Sen. Lindsey Graham – is “not ready for prime time.”

“Nancy Mace’s ‘answers’ (on Beck’s show) were not illuminating,” host Jay Severin of The Blaze observed. “In fact, they were pretty much excruciating.”

“In politics some things change, but many remain the same,” Severin added. “Like ‘You must be ready for prime time.’ And as of the Glenn Beck Show this week, Nancy Mace isn’t.”

We disagree with Severin’s analysis. Beck’s line of questioning on several instances was … well … bizarre. And at times it was pretty invasive on a personal level (without there being much of a reason for the invasiveness). For example, at one point he kept harping on Mace to open up to him about her “soul.”

“I don’t mean to be a stickler here, but … my question was ‘how is your soul?'” Beck peppered Mace. “Do you know the value of your soul? How is your relationship with uh, the, uh, the originating source of your soul, and uh, what makes you think you’re not going to go into a lion’s den – because that’s what is – and, uh, and … you’re just not gonna lose your sole up there?”

Huh? How in the hell is somebody supposed to answer a line of questioning like that? Also, last time we checked Mace’s relationship with her creator is none of Beck’s business – and had very little to do with the duties of a U.S. Senator.

Nonetheless, Mace did her best to oblige …

“Well, what I can say about my soul is that I am founded on very specific principles and I do not waver and I believe I’m on the right side here – on the right side of the angels,” Mace said. “And when I go to Washington I’m not going to waver from that. I have shown consistently in my life that I’m a very hard worker and I’m self-reliant and that’s what I want to bring to D.C. I see what’s happening up there and it is very frustrating.”

Mace’s performance on Beck’s show was by no means a home run, but we think she handled a quirky interviewer fairly well. She certainly did much better on Beck’s program than she did in this interview with Fox News host Neil Cavuto.

Thus far, Mace actually appears to be following the Nikki Haley playbook – which involves memorizing a tight script and sticking to that script no matter what questions she’s asked.

That approach obviously worked for Haley … will it work for Mace?

To view Mace’s interview with Beck in its entirety, click the video link below …