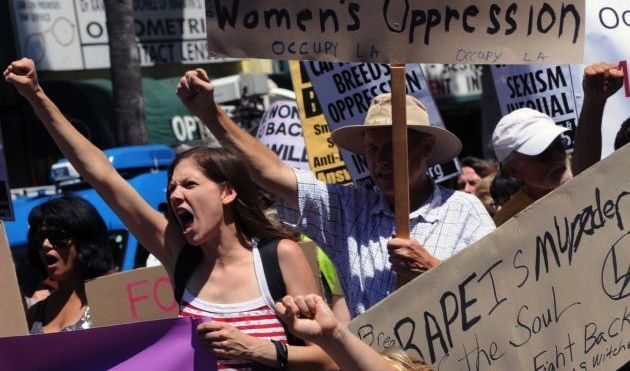 This website is a big, blunt instrument providing raw, penetrating insights … insights that go deep. Very deep. We’re also all about repetition. And endurance. And consistency …

Of course our raw, penetrating and consistent bluntness often has its drawbacks, like our repeated reference to 1990s-era Feminazi gender card players as “irascible vaginas.”

Is that description over the top? Probably …

But it makes our point: Namely that gender – like race, religion, sexual orientation, socio-economic status, etc. – should never be an issue in supporting or opposing anything or anyone in politics. Seriously, trading on such distinctions does a disservice to both the individual making the stink and the broader issue that’s up for discussion.

Like the magazine George said over a decade ago, “there’s no gay way to fill a pot hole.”

Anyway, our commentary has apparently enraged the authors of the Feminazi blog Tell Them, which took strong objection to our recent use of the “irascible vagina” term in describing Ginny Deerin, a female activist livid at the S.C. General Assembly for not appointing enough women to boards and commissions.

Never mind that this website has repeatedly championed the elimination of the vast majority of these commissions – which serve as islands of unnecessary, unaccountable government in a state government that’s already far too big for its britches. And never mind that this website actually ran a guest column from one of the women allegedly discriminated against in this appointment process – a woman who agrees with our contention that it was legislative nepotism, not gender discrimination, that cost her the appointment she coveted.

Oh, and never mind that we have consistently opposed such nepotism …

In spite of all this, Tell Them is livid at our sexist “venom and vitriol” – and is disappointed more people haven’t called us out for it.

“Where ARE the women?” one of the group’s leaders writes in railing against our article. “When did we decide to ignore attacks such as this on good women like Ginny Deerin? Where are we, and what are we doing that is more important than standing against this sort of uncalled-for, public, misogynistic attack?”

Specifically, the website notes that there were “twenty-two comments … posted to this female-demeaning article” but only one of them tapped into the “appropriate level of outrage.”

According to Tell Them, the use of offensive terms is especially galling in this case given our founding editor’s colorful past.

“Especially by this dude, who plead guilty in 2005 to criminal domestic violence towards his former fiancée,” she notes. “Especially by this guy, who has written his own vagina monologue since 2005, promoting himself as the man really behind our current governor (if you know what I mean).”

Wait … didn’t Will Folks (a.k.a. Sic Willie) just answer a question about the governor’s behind? What is it with people focusing in on Nikki Haley’s backside this week?

Anyway, as fate would have it there are two cases pending in Richland County (S.C.) family court with the potential to vindicate our founding editor on both of these issues (most notably this one) but then again vindication isn’t something we’re overly concerned about.

We flat don’t worry about it …

What else do we not worry about? The acceptance of a bunch of whiny Feminazis who fail to realize their increasingly shrill bitching and moaning is doing more to hurt them – and the candidates and causes they advance – than it hurts us.

As one of our liberal columnists herself has noted …

Translation? Put your big girl panties on, ladies. Or don’t … (we subscribe to the Vladimir Putin school of responding to female protests). But either way, figure out that the path to credibility comes from being credible, not by being a woman.

Related Topics:FeminazisFeminismSouth Carolina women in politicsWomen in Politics
Up Next