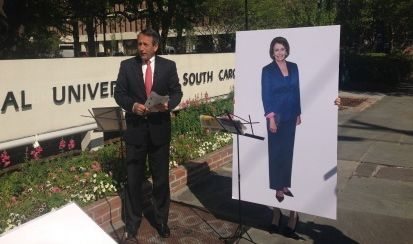 Eager to get his “comeback campaign” back on track in South Carolina’s first congressional district, former Gov. Mark Sanford has taken a page out of Clint Eastwood’s book …

Although instead of talking to an empty chair, he’s debating a life-sized cutout of Nancy Pelosi – the ranking Democrat in the U.S. House of Representatives and (more importantly) a polarizing figure who polls terribly in the Palmetto State.

Sanford is employing this visual device in an effort to call attention to the fact his Democratic opponent in next month’s special election – Elizabeth Colbert-Busch – won’t debate him.

“My opponent continues to run a stealth campaign, avoiding public appearances and refusing to commit to televised forums for the benefit of 1st district voters,” said Sanford. “Since Elizabeth Colbert Busch refuses to articulate her views publicly, we are left to draw inferences for what she stands for on the basis of the groups that have made substantial monetary investments on her behalf.”

How much have national Democrats pumped into the first congressional district race? More than $1 million, Sanford said in a press release.

“We know what Nancy Pelosi stands for – she is anti-Boeing, pro-stimulus, pro-Obamacare and supports raising the debt ceiling,” Sanford said. “But because my opponent is refusing joint appearances  to answer questions about where she stands on the issues, all we can assume is that she is going to be a reliable vote for the Pelosi-Obama agenda, were she to be elected.”

That’s accurate … for all her attempts to distance herself from Washington, D.C.’s liberal elite, Colbert-Busch is exactly what Sanford says she is (and maybe worse). Nor is her personal life drama free, it’s worth noting.

Meanwhile for all his flaws (exhibit A: his chronic narcissism) Sanford was a reliable pro-taxpayer vote during his first stint in the U.S. Congress from 1995-2001 – which is why we endorsed him for the GOP nomination for this seat over fiscal liberal Curtis Bostic.

Of course Sanford’s lack of judgment and perpetual compounding of his own mistakes continues to dog his candidacy … and could very well cost him this election.

In fact last time we checked, he was costing himself this election.

Will a debate with a cardboard cutout of Nancy Pelosi be enough to stabilize his campaign? No … but at least Sanford has finally figured out that it’s time to stop dumping more water into his boat.