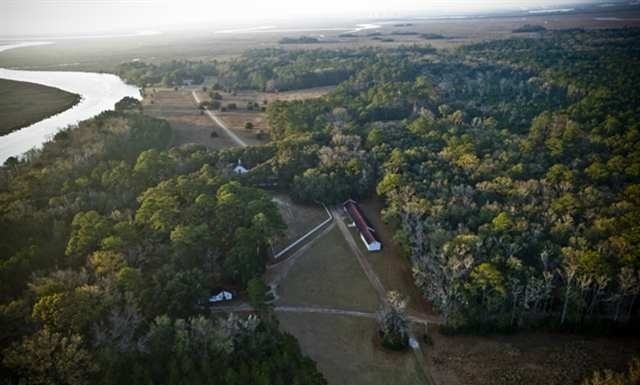 For those of you lacking the means to see it with your own eyes, that there’s Red Bluff Plantation – a sprawling, luxurious South Carolina vacation destination eager to open its historic gates to anyone wanting to “embrace the majestic spirit of the Low Country.”

Anyone with plenty of (other people’s) money that is …

Only eleven miles from historic Savannah, Georgia and situated along breathtaking New River, Red Bluff Plantation’s private grounds provide the ultimate escape for nature enthusiasts, corporate clients, organizations, and families. Red Bluff is the perfect venue to host your wedding. The plantation’s 6,400 acres of river frontage provides unparalleled views of the Low Country’s salt marsh and surrounding barrier islands. The estate consists of nearly 2,000 acres of high ground and 4,400 acres of marsh and wetlands, home to deer, turkey, dove, quail and duck making it the ultimate hunting destination. The plantation’s private boat landing and dock provide access to the pristine New River, the Intracoastal waterway and the Atlantic Ocean. The main house is a 7,200 sf exquisite reproduction of a typical 19th century plantation house custom built by master craftsmen in 1981. The barn and pastures can accommodate quests and their leisurely pursuits.

Why are we commending this swanky location to your attention? Well, as it turns out Red Bluff is one of several plantations recently purchased with money from the notoriously corrupt S.C. Retirement System Investment Commission (SCRSIC).

Not only that, we’re told the Florence, S.C. law firm of corrupt SCRSIC Chairman Reynolds Williams did approximately $120,000 of legal and title insurance work on this property – despite clear legal and ethical prohibitions against fund trustees participating in such activity. As FITS readers no doubt recall, Williams is already under investigation by both the S.C. State Law Enforcement Division (SLED) and the S.C. State Ethics Commission (SCSEC) for a slew of other alleged self-serving deals. In fact he would have been booted as chairman of this fund had he not cast the deciding vote to save his own skin last year.

What a guy, right?

Red Bluff, purchased by the pension fund in November of 2011 for roughly $10 million, is once again up for sale. Will taxpayers make money off the deal? We doubt it. In fact this looks to us like another example of the SCRSIC’s reckless foray into land speculation rather than putting retirement assets into safer long-term investments.

This short-sightedness – along with routinely exploited retirement loopholes – continues to drain South Carolina taxpayers. For fiscal year 2012 the fund returned 0.37 percent – placing it in the bottom fifth of pension plans across the country. It also paid $364 million in fees to produce a profit of only $125 million.

Of course these dismal statistics haven’t stopped the ethically challenged Williams from living high on the hog … with our money.

In fact he and certain other “high and mighty” South Carolinians have reportedly enjoyed some raucous nights at Red Bluff Plantation – expensed to the state retirement fund, naturally.