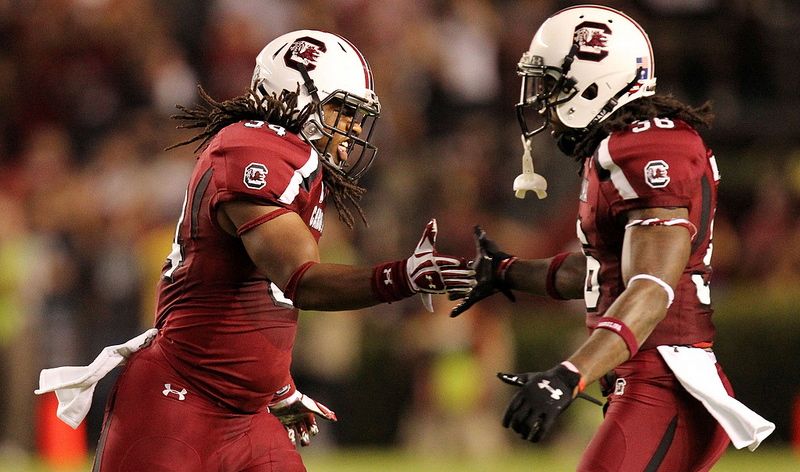 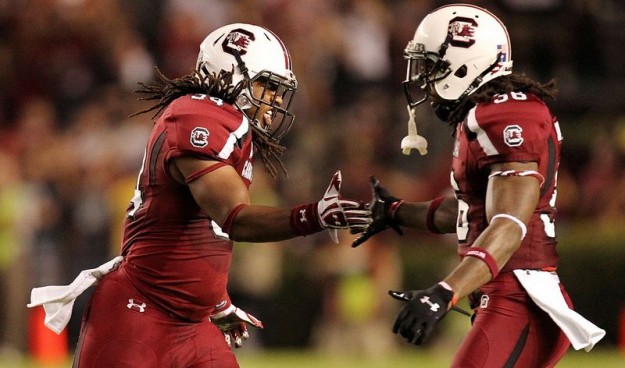 By John Loveday || Since defeating Arkansas at Williams Brice Stadium four years ago, the University of South Carolina football team has struggled mightily when it comes to competing against the Razorbacks.  In fact Arkansas has flat out owned the Gamecocks these past three years – enjoying an average margin of victory of 18 points.

No time would be better than the present for No. 8 USC (7-2, 5-2 SEC) to right the ship in this series – although the Gamecocks will obviously have to accomplish that task without the services of star running back Marcus Lattimore, who suffered a serious knee injury two weeks ago against Tennessee.

Arkansas started the preseason ranked No. 10 in the nation by both the Associated Press Top 25 and USA Today/ Coaches’ poll. However, after losing head coach Bobby Petrino in the off season and stumbling to a 1-4 start, most Razorback fans long ago started focusing on 2013 and who their next head coach will be (it’s all but official that Arkansas will not retain interim head coach John L. Smith after this year).

Since the 1-4 start, Arkansas has won three out of its last four games.  However, those victories have come against the two worst teams in the SEC (2-7 Auburn and 1-9 Kentucky) – along with a nail-biting four-point victory over Conference USA foe Tulsa.

With USC celebrating its 2012 homecoming this week, the last thing the Gamecocks want to do is drop a fourth straight game to the Razorbacks in front of their home crowd. Coming off a bye week, USC should be well rested and ready to improve its home record to 6-0 on the season.

By and large, Arkansas’s struggles this year stem from poor performance on the defensive side of the ball. Arkansas is ranked 72nd in the country and 12th in the SEC in total defense.  The Razorbacks have allowed 50 or more points twice this season and 30 or more points three times. The Razorbacks’ pass defense has been particularly horrid, allowing an average of 292 yards per game – which ranks 112 nationally and 13th in the SEC.

The Razorback rush defense has been another story this season, allowing only 121 yards per game.  That’s good for 24th in the nation and 5th in the SEC.  Without Lattimore in the lineup, South Carolina will need Connor Shaw to be effective throwing the football.  After struggling in USC’s losses to LSU and Florida, Shaw is coming off a career performance against Tennessee in which he completed 22 of 32 passes for 356 yards, three touchdowns, and one interception.

If Shaw can turn in a similar performance against the Razorbacks, USC’s chances of victory improve exponentially.

Only hours after Arkansas’ narrow victory over Tulsa last week, the team’s starting linebacker Terrell Williams was arrested for driving while intoxicated.  Williams has been suspended indefinitely and is unlikely to play against the Gamecocks this weekend.  Williams was forced into a starting role this season after Tenarius Wright and Alonzo Highsmith suffered season-ending injuries.

His suspension adds insult to injury for an already shaky Razorback defense.  Not only that, starting Arkansas defensive tackle DeQuinta Jones has missed two out of the past three past games, and did not seem to be full speed last week against Tulsa.

The Gamecocks badly missed both of their starting defensive tackles against Tennessee.  Kelcy Quarles missed the entire game with a shoulder injury and starter Byron Jerideau went out early in the game after re-injuring his ankle.  With USC’s best two defensive tackles out of action, the Volunteers were able to double-team Jadaveon Clowney for most of the game.

Having Quarles and Jerideau back this week should make a tremendous difference.

Against Tennessee, the South Carolina defensive front only recorded one sack in the game – and was unable to put pressure on quarterback Tyler Bray.  As a result Bray was able to throw for 368 yards and four touchdowns.  The Gamecocks will face another strong arm this week as Arkansas quarterback Tyler Wilson currently ranks third in the SEC in passing yards with 2,526 thus far this season.

If Wilson is given the same kind of time Bray got, he will pick apart this USC defense.

Like Tennessee, Arkansas has been much more effective through the air than on the ground this year.  The Arkansas passing offense is ranked 22nd nationally and 3rd in the SEC – however the Razorbacks are a lowly 99th in the nation and 13th in the SEC is rushing offense.  This reinforces the need for the Gamecocks’ front seven to get pressure on Wilson early and often.

USC punter Tyler Hull picked a perfect time to have his best kick of the year against Tennessee two weeks ago – booming a 51-yard punt in the waning moments of the game. The coverage team corralled dangerous UT punt returner Cordarrelle Patterson, forcing the Volunteers to start their drive on their own 16-yard line.

Arkansas has a very solid punter in senior Dylan Breeding – who currently ranks 22nd nationally in net punting.  However, the punt and kickoff return aspect of the Razorback special teams unit has not been very productive.  Arkansas ranks 12th in the SEC in punt return yard average and dead last in the SEC in kickoff return average. As long as USC avoids the sort of miscues that plagued them against Florida earlier this year they appear to have a special

Arkansas is only averaging 22 points per game against its SEC opponents.  After a much-needed bye week, USC should be in much better shape  (with the notable exception of Marcus Lattimore, obviously).   With its defensive line back at full strength, look for the Gamecock defense to apply more pressure to Tyler Wilson this week, versus two weeks ago against Tyler Bray. Arkansas will score points early making the game close at halftime.  However, the Gamecock defense will buckle down in the second half while the USC offense will continue to roll.

Damn. The SEC is looking more nappy every year. Sally’s Beauty Supply will have to start sponsoring some jersey designs or sumpin. Kinda’ looking like Bob Marley on steroids. No Problem from me, man…

da mamas already be slapping each other. They even chest bumping and fist bumping, too. Already got the NFL jerzees picked out to be wearing with their baby’s number on the back. And the babies daddies got their matching truck and camper all picked out to travel to all the games. Life is just a touchdown away!