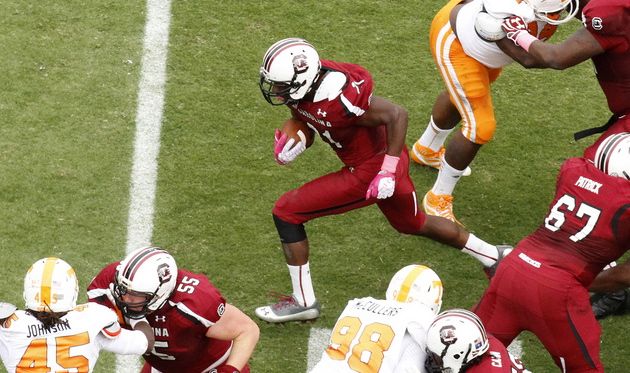 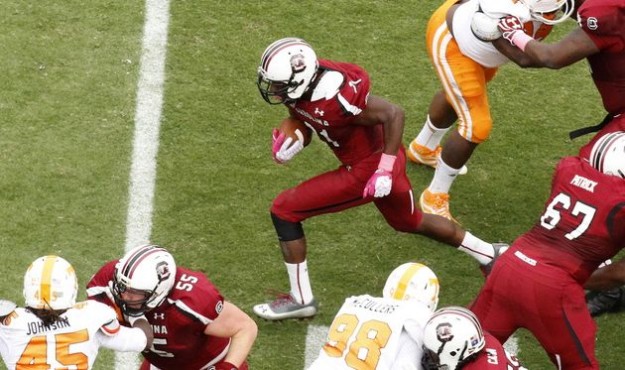 Anyone who watched University of South Carolina running back Marcus Lattimore go down against the Tennessee Volunteers earlier this year couldn’t help but entertain grave doubts as to whether the Gamecock superstar would ever play football again.

The injury to Lattimore’s right knee was downright gruesome … and initial concern that he might have suffered arterial damage along with his dislocation (hyper-extension) had some questioning whether he would suffer the same fate as high school quarterback Jacob Rainey, who lost his leg after a similar injury in 2011.

Fortunately, Lattimore’s injury – while severe – wasn’t as bad as it appeared.  While initial comparisons were made to the career-ending broken leg suffered by former Washington Redskins quarterback Joe Theismann in November 1985 – Lattimore’s injury is now being compared to the January 2003 knee injury suffered by former Miami standout Willis McGahee. 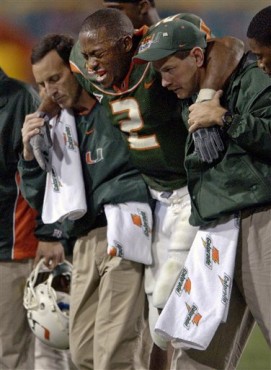 McGahee tore three ligaments in his knee during the Hurricanes’ national championship loss to Ohio State, after which he underwent an extensive rehabilitation that kept him sidelined for his entire rookie season in the NFL.  He eventually recovered, though, and has amassed nearly 8,000 rushing yards and 63 touchdowns in eight-and-a-half seasons with the Buffalo Bills, Baltimore Ravens and most recently, the Denver Broncos.

Late last week the USC star “had several ligaments surgically repaired in his right knee by a team of physicians in Birmingham, Alabama,” a statement from the University reveals.

Lattimore “returned to Columbia over the weekend and was released from a local hospital on Monday,” the school’s released continues, adding that the 21-year-old tailback “is in good spirits and has already begun the rehabilitation process.”

The school says further surgery will not be needed – although it did not release a timetable for his recovery.

Obviously the fact that Lattimore will be able to play again after suffering such a catastrophic injury is amazing news – and a testament to the skill of the trainers who treated him on the field and the doctors who attended to him and operated on him.

The 6-foot-1, 218-pound Duncan, S.C. native – who bounced back from a season-ending injury to his left knee in 2011 – has a medical redshirt year he could use for 2013 depending on the timetable of his rehabilitation.

Whatever he decides to do – and at this point we have no doubt that he’s planning a return to the football field – we wish Lattimore nothing but the best.

In 28 games at USC, Lattimore has rushed for 2,677 yards and scored a school-record 41 touchdowns.  Not only that, he’s inspired his teammates, fans and even his opponents with his selflessness in all aspects of life.

Like Clemson head football coach Dabo Swinney said recently, Lattimore represents everything that is right about college athletics – which is why we hope to see him competing again just as soon as he can.

Nation’s No. 1 Recruit Decommits From Clemson