YET ANOTHER REPORT LINKS INCOME TAX RELIEF TO ECONOMIC GROWTH

Rather than build a competitive climate that promotes job growth, income growth and expanding consumerism, South Carolina’s leaders have opted instead to spend increasing sums of money on taxpayer-funded incentives – which are basically bribes paid to companies in exchange for locating here.  In fact the Palmetto State’s investment in “targeted tax credits” has soared from $34 million annually in 1998 to more than $1 billion a year in 2010.

Of course not … in fact there’s a whole lost decade’s worth of data to prove it.

These bribes don’t work because they shift the state’s tax burden – and they are notoriously secretive, which is a recipe for disaster in a state as corrupt and secretive as South Carolina.  Unfortunately, our state’s reliance on these giveaways has continued to expand under S.C. Gov. Nikki Haley, who campaigned as a small business backer but has chosen to govern as a crony capitalist instead.

This website has repeated argued that instead of doling out taxpayer-funded incentives, our state’s leaders should instead reduce our top marginal income tax rate – which currently stands at 7 percent (and kicks in as soon as you earn $14,000).

As you can see from the map below, South Carolina has one of the highest tax rates in the nation – and it kicks in at a very low income level (meaning everybody has to pay it).  Effectively, we have the highest income tax rate in the Southeast … 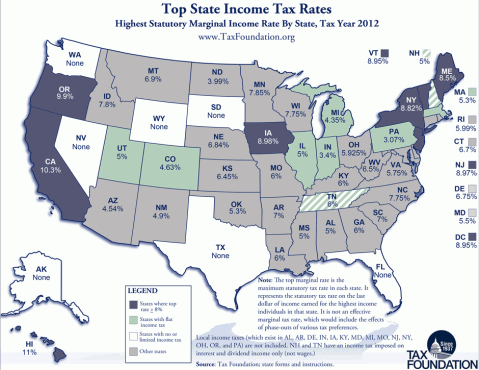 The report – entitled “Taxes Really Do Matter” – was released recently by The Laffer Center for Suppy-Side Economics (a source of libertarian nerd manna).  It reveals that between 2001-2010, population growth in the nine states that do not levy an individual income tax soared by more than 14 percent.  The nine highest-tax states?  They saw population growth of only 5.5 percent.

Meanwhile job growth in the nine “no income tax states” was up by 5.5 percent – compared to minus-1.6 percent in the nine highest tax states.

This stuff is not rocket science.  Cutting individual income tax rates not only helps individual taxpayers (stimulating consumerism), it helps the vast majority of sole proprietors and LLCs that file as individuals (stimulating job growth).

Why on earth can’t South Carolina’s “Republican” governor and its “Republican-controlled” state legislature get that?

Easy: They’re getting reelected by convincing a dumb-as-dirt populace that they’re “creating jobs.”

They’re not … they’re killing our competitiveness.

“There is far too much secretive top-down planning by state government officials – chasing specific companies and industries with taxpayer subsidies – and not nearly enough attention to the underlying business climate,” S.C. Sen. Tom Davis (R-Beaufort) said recently. “Instead of making South Carolina a place where everyone has a fair shot at succeeding, we are favoring the politically well-connected. That’s neither fair nor good policy.”

About That Bar Brawl …