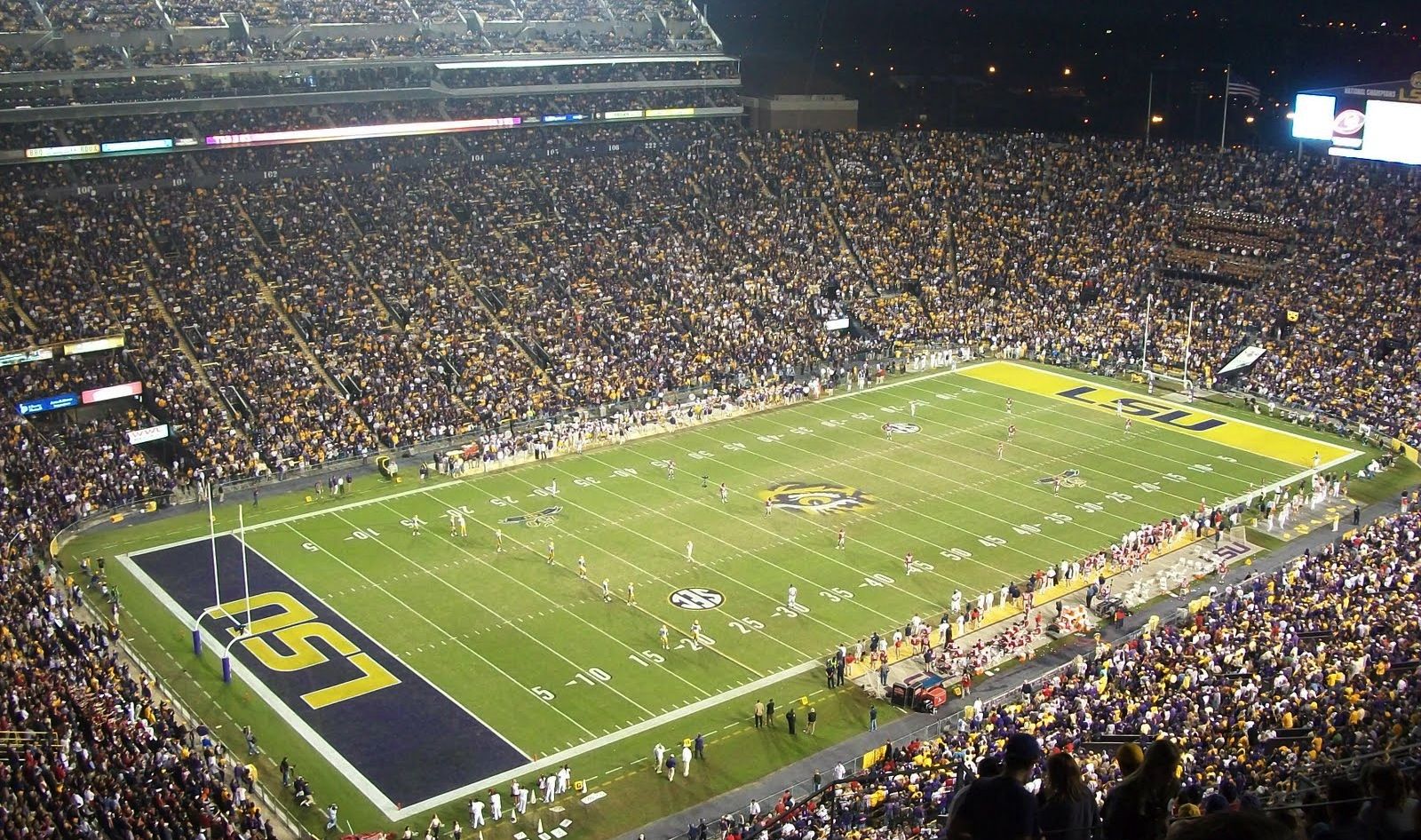 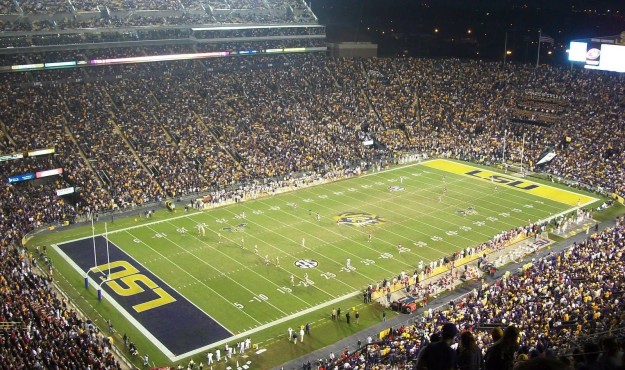 By John Loveday || Heading into the 2012 season Louisiana State University was the top-ranked team in the nation (according to the USA Today/ Coaches’ poll) and widely considered to be a legitimate national title contender – for a second year in a row.

That optimism began to wane in early August when All-American defensive back Tyrann Mathieu (a.k.a. the “Honey Badger”) was dismissed from the team for violation of team rules.  More than his defensive play, Mathieu was known for his “big-playability” on special teams and the “swag” he brought to the LSU defense.

But Mathieu’s absence isn’t the only loss the Tigers (5-1, 1-1 SEC) have suffered.  Injuries have started to mount for head coach Les Miles’ team, especially at key positions along the offensive line and at linebacker.  Here are a few other LSU players who will/ could be missing in action this weekend when the No. 3 University of South Carolina Gamecocks (6-0, 4-0 SEC) roll into Baton Rouge.

These injuries – along with poor offensive play – doomed LSU last week against Florida.

Even though LSU is struggling on offense this season, their defense remains one of the best in the country. LSU is giving up only 12.8 points per game this year (eighth in the country).   However with LSU linebackers Kevin Minter and Kwon Alexander injured in the third quarter last week, Florida was able to take a 7-6 lead over the Tigers and eventually pull away for a 14-6 victory.  Minter was suffering from cramps and able to return to the game, however Alexander was lost for the season with a broken ankle.

While LSU’s defense isn’t giving up a lot of points, it is susceptible to an effective rushing attack.  The Tigers have been mediocre at best the past two weeks against the run –  getting out-rushed by Towson (188 to 158 yards) and Florida (176 to 42 yards).

Obviously this plays right into the strength of the USC offense – which will look to establish the run with Marcus Lattimore and quarterback Connor Shaw and then exploit that advantage in the form of play action passing (i.e. the game plan they worked to perfection a week ago against Georgia).

One final note:  The South Carolina offensive line played its best game – by far – of the season last week against the Bulldogs.  If they can turn in a similar effort against the Tigers, USC will leave Baton Rouge with a win.

In LSU’s first two games against SEC opponents this season (Auburn and Florida), the Tigers have scored only 10 points and 6 points, respectively.  I read the other day an LSU fan blogging about the offense, and I quote “You know we are struggling on offense when we feel more optimistic about our defense scoring points versus our offense.”

That is about where the LSU offense is right now.

The injuries across the offensive line are really taking a toll on the running game and pass protection.  As a matter of fact, the LSU passing game is averaging 195 yards per game – which ranks 100th (out of 124 FBS schools).  Starting quarterback Zach Mettenberger has really struggled against SEC completion this year.  In two contests Mettenberger is averaging 164 passing yards with a 49.8% completion percentage per game.  In both games total Mettenberger has thrown zero touchdowns and one interception.

Looking for a silver lining? Both of those contests were on the road.

Coming into the USC/UGA contest, the Bulldogs were the SEC’s highest rated offense averaging 48 points, 248 rushing yards, and 536 total yards per game.  The Gamecocks held the Bulldogs to 7 points, 115 rushing yards, and only 224 total yards.  Look for the Gamecocks to bring a similar mentality to this contest – stop the run and force the quarterback to beat you.  Aaron Murray couldn’t do it, can Zach Mettenberger?

Jadeveon Clowney update: Through six games Clowney is currently tied for fifth in the country and second in the SEC with 6.5 sacks. The USC defense is still ranked number two in the country with 25 sacks. In case you were wondering, LSU has recorded a respectable 16 sacks on the season.

Had Mathieu not been suspended, special teams could have been a huge advantage for LSU.  As it stands now, the Gamecocks are holding the “Ace.”  Junior wide receiver Ace Sanders has been nothing short of sensational this season for USC, ranking third in the country in total punt return yards (263) – a staggering 14.6 yard average per return – with one touchdown.  Sanders turned the momentum in the Missouri game with his 49-yard punt return to the Missouri four yard line.  In addition, Sanders essentially put the game away with his 70-yard punt return for a touchdown against Georgia, which gave the Gamecocks a 21-0 lead.

One area where LSU does have an advantage is in the kicking game.  The Tigers are 8 of 11 (72.7 percent) on field goal attempts this season. The Gamecocks are just 3 for 5 (60 percent) – with one field goal being blocked.  Spurrier has stated many times he doesn’t like kicking field goals, but given the strength of the LSU defense he may be forced to kick a few in this one.

South Carolina’s defense is surrendering just 10.5 points per game (fourth-best in the nation) and gets a chance to play against a struggling offense.  However, LSU’s defense is almost as good as the Gamecocks, and Death Valley is one of the most difficult venues to play in  anywhere in the country –especially at night. Look for a struggling LSU offense to be forced into punting numerous times, allowing USC too many opportunities to score.  The game will be close, if not tied, at halftime.  Nevertheless, the Gamecocks will pull away in the second half to extend their NCAA-best winning streak to eleven games (and win their second consecutive Top Ten showdown).

Nice job, John. Thanks for the info. Hope you are right.

OBC will have this team primed and ready to play in Death Valley. Certainly we like your prediction!!

It’s going to be a fight to the end. Two great defenses going toe-to-toe. I like USC’s defense against LSU’s offense: they scored only 6 pts. versus UF and 12 versus Auburn. While LSU’s defense is stout, I believe USC’s offense is balanced enough to score enough points. UF ran for 176 yards and Shaw is much more mobile and a better runner than UF’s Driscole and I think USC will be able to run. USC must play near perfect like they didi against UGA: o-line must come through, no stupid penalties, and no turnovers.

And, Dabo, shut the fuck up.

Real classy! Glad you are an SC fan.

OBC will have the hoods ready. Sorry old Miami. Hope they are not late getting back and miss their remedial work. I guess they can have their grades “Jeffried”.