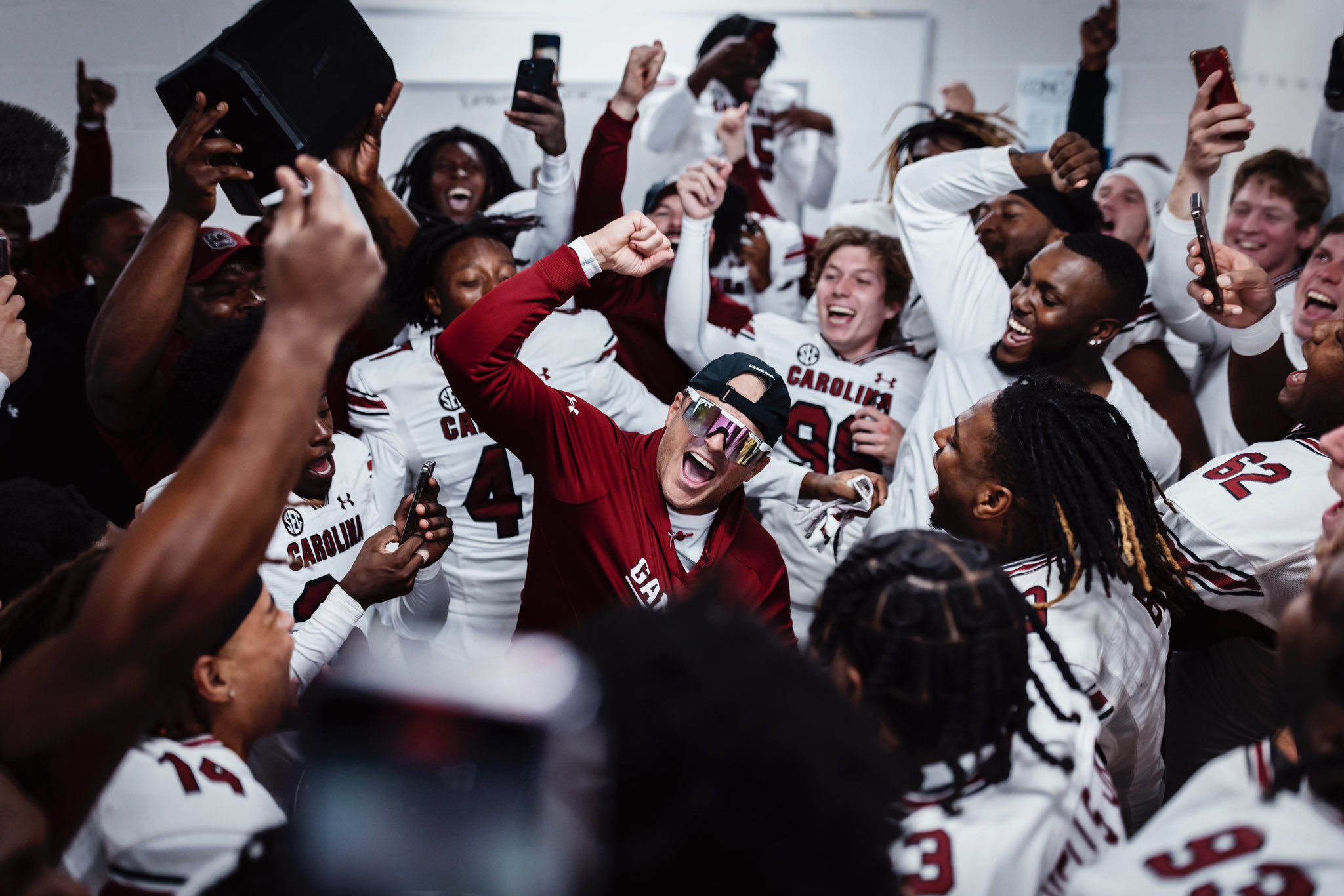 University of South Carolina head football coach Shane Beamer experienced a lot of firsts on Saturday night in Lexington, Kentucky. His Gamecock squad provided him with his first-ever win over a ranked opponent – as well as his first-ever road win in the Southeastern Conference (SEC).

Coming into the weekend, Beamer was 0-5 against ranked opponents and 0-5 on the road against conference opponents. In fact, prior to Saturday’s 24-14 win over the No. 13 Kentucky Wildcats, his teams had never come within two touchdowns of beating a ranked opponent.

What made this victory even more impressive? The fact it came less than a month after Beamer’s program was utterly humiliated in a home loss against then-No. 1 Georgia – a debacle which had many South Carolina fans worrying whether “Beamerball” had regressed from its expectations-defying inaugural season.

Before we get too carried away about the current iteration of Gamecock football, though, it is worth noting Kentucky was playing without its superstar quarterback Will Levis – a consensus top ten pick in the 2023 National Football League (NFL) draft.

Through five games, Levis (above) had already amassed 1,405 passing yards and 12 touchdowns. His absence forced tenth-year head coach Mark Stoops to insert redshirt freshman Kaiya Sheron – who hadn’t thrown a collegiate pass prior to Saturday – into the starting lineup against the Gamecocks.

Levis wasn’t the only loss the Wildcats were dealing with on Saturday night. Starting right tackle Jeremy Flax – who had a huge game in the Wildcats’ September 10 win on the road over No. 12 Florida – was also unable to play. As was the team’s second-leading tackler – linebacker Jacquez Jones.

Kentucky also lost two of its top wide receivers – senior Tayvion Robinson and true freshman Dane Key – during the game against South Carolina. Those two receivers have combined for 44 catches, 683 yards and six touchdowns so far this season.

The Wildcats were banged up bad, people …


Still, South Carolina won this game where all college football games are ultimately won (or lost) – in the trenches. Particular credit goes to the Gamecocks’ much maligned defensive front – which entered the game with only four sacks through its first five contests.

In a classic case of a weakness becoming a strength, South Carolina obliterated the so called “Big Blue Wall” en route to recording six sacks and eight tackles for loss against Kentucky. It was especially nice seeing heralded recruits Zacch Pickens and Jordan Burch finally start asserting themselves.

While South Carolina’s defensive front shone for the first time this season, its offensive line also turned in arguably its best performance against the Wildcats – paving the way for its first 100-yard rusher in a conference game since former Gamecock (and current New England Patriots) tailback Kevin Harris went for 128 yards in last year’s upset win over Florida.

After being held to just 55 yards in conference losses to Georgia and Arkansas earlier this year, redshirt sophomore tailback MarShawn Lloyd ran for 110 yards and a touchdown against Kentucky – his first-ever 100-yard game against an SEC opponent.

Here was Lloyd’s longest run of the night – a 45-yard scamper midway through the fourth quarter which set up a Jalen Brooks’ touchdown two plays later.

South Carolina’s win over the Wildcats was only its second in the last nine seasons – with Kentucky winning five in a row from 2014-2018 and scoring back-to-back wins in 2020 and 2021. Basically, the Wildcats had leapfrogged the Gamecocks in the SEC East after losing thirteen of fourteen in the series from 2000-2013.

This win was especially sweet for Beamer, who was mocked by Stoops during the SEC’s preseason media event back in July.

“It’s easy to change a climate,” Stoops said, referring to the first-year Gamecock coach. “You can change a uniform, talk a little game, dance around, put on some stupid sunglasses. But to change a culture is at the core and I’m quite certain that we’ve changed our culture.”

Were those words forgotten? Nope. Not even a little bit.

In fact, Beamer expressly referenced Stoops’ comments during his remarks to his team following the victory.

“At SEC media days he talked about stupid sunglasses and dancing,” Beamer said, donning a pair of shades and rocking out to Soulja Boy’s “Turn My Swag On.” South Carolina football’s official Twitter page posted the video with the headline “Climate Check.”

So … has Beamer turned a corner with this program? And are upcoming games which figured to be guaranteed losses suddenly winnable?

“Beamer has thus far succeeded only in silencing his critics,” I reminded Gamecock fans at the end of last season (and again at the beginning of 2022). “He has yet to consistently prove them wrong.”

Saturday’s win over Kentucky certainly silences those critics again – but South Carolina is going to need to establish some sustained consistency against its conference opponents before “Beamerball” truly takes root in Columbia, S.C.

Oh, and a win over its arch-rival for the first time since 2013 would be nice, too …