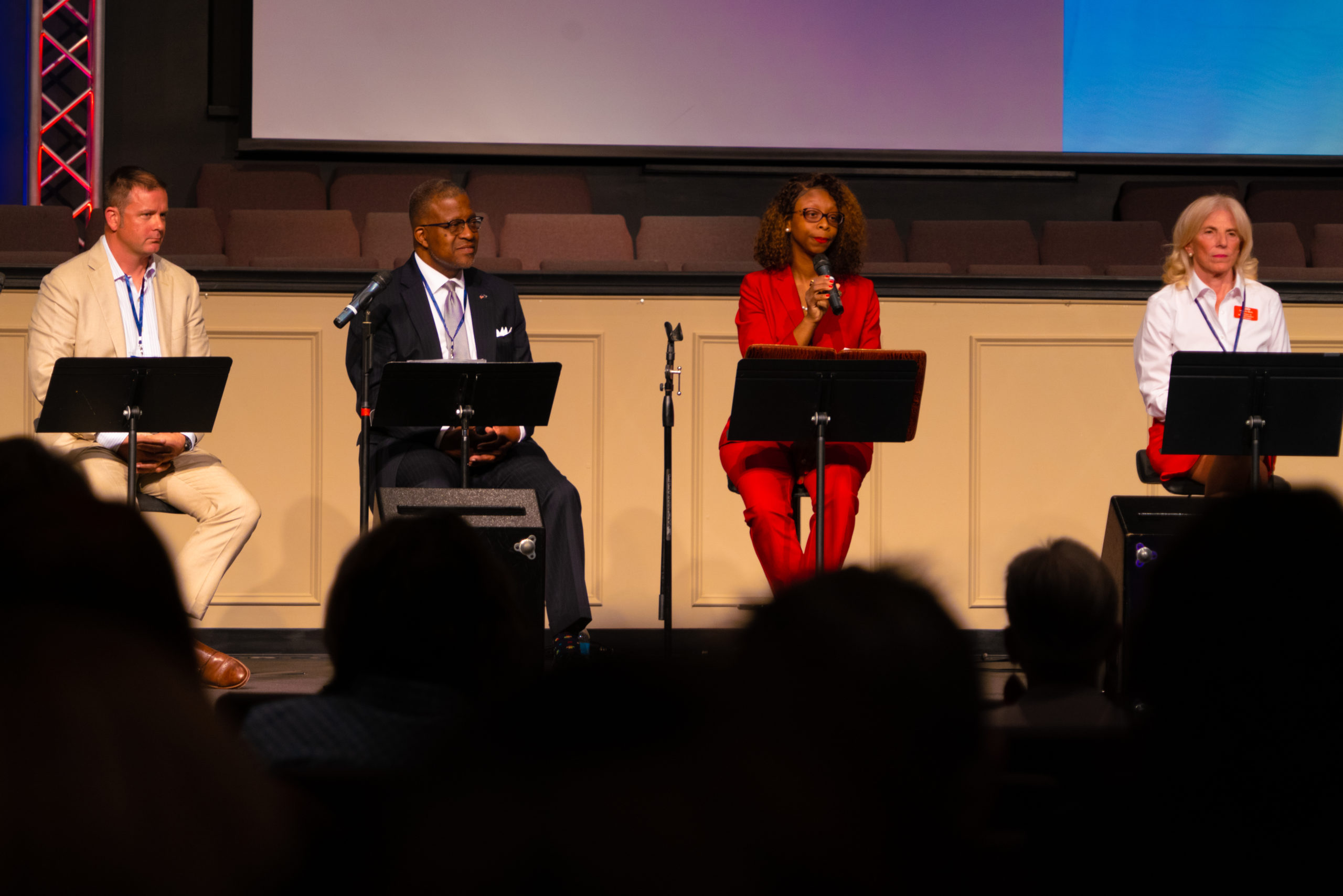 After a relatively tame gathering of GOP candidates in the Palmetto Lowcountry last month, South Carolina’s superintendent of education candidates squared off again last Thursday – this time in the Midlands region of the state.

The forum was held at Life Springs Church in Lexington, S.C. by the Lexington Moms for Liberty.

The tri-partisan (thanks to Green Party candidate Patricia Mickell) affair focused on issues which have prompted unprecedented levels of parental involvement in the last two years – Covid-19 restrictions and liberal curricula.

I’ll admit it – I was naïve enough to believe this debate might feature more idealogical diversity than the GOP forum FITSNews attended and covered, which featured solely Republican (for whatever that is worth) candidates. What actually happened was that the five GOP candidates did little to distinguish themselves ideologically on issues outside of school choice.

While the Republican candidates weren’t seated in the church’s choir loft, their responses to most of the questions presented to them were clearly coming off the same sheet of music. Democratic candidate Dr. Gary Burgess and Mickell appear to have peeked into the hymnal as well given their fastidious avoidance of culture war landmines.

While the two non-GOP candidates avoided any rhetorical detonations, “Republican” candidate Kathy Maness was repeatedly kneecapped by those in attendance over her record as a local town councilwoman.

When candidates were asked to discuss their views on school closures at the peak of the pandemic, Maness asked the crowd “Who here is from Lexington?”

Lexington parent Debbie Heim stood up and exclaimed “I am – and you made me wear a mask!”

Maness voted to end Lexington’s mask mandates ahead of schedule, but the facial expressions and auditory exclamations of numerous members of the audience indicated their dissatisfaction with her response to the pandemic.

Maness (above) faced another broadside during the public comment section of the debate when Lexington district one school board candidate Arron Granade read an email conversation between Maness and district one board member Jada Garris.

Granade was incensed by Maness’ “belittling and insulting” email to Garris, and demanded to know if she intended to have similar relations with local school boards as state secretary of education.

Maness replied that relations between the town and the school board have vastly improved, and went on to discuss the town’s concerns about traffic (a topic addressed in Garris’ email).

Granade asserted that Maness had not answered any of his questions, reiterating that he had inquired wether she would respect board members and “treat them with cordiality.” As members of the audience applauded Granade’s rejoinder Maness replied “Absolutely.”

Maness’ campaign was dealt an early blow when Democrat and SC for Ed founder Lisa Ellis joined the race. Ellis has the potential to draw centrist and Democrat educators that Maness was hoping might cross party lines and bolster her GOP primary bid.


Ellen Weaver, the race’s frontrunner, performed well at this debate. Weaver is clearly a political professional – after graduating from Bob Jones University she went to work with former U.S. senator Jim DeMint in 2012.

Readers might remember DeMint promised to be a pro-taxpayer, pro-free market and pro-liberty senator, but he left his post four years early to lead the Heritage Foundation.

As FITSNews reported at the time, this decision “set off an avalanche of hero worship from establishment Republicans who have spent the last few years cursing DeMint under their breath, hoping he would stop making their lives miserable and join his tax-and-spend brethren in the GOP Senate Caucus.”

Since the writing of the original article our founding editor Will Folks‘ assertion that “DeMint’s decision to leave the Senate has fundamentally altered South Carolina’s political landscape – for the worse.” was proven prescient when the board of the Heritage foundation asked DeMint to resign in may of 2017.

Weaver (above) launched the Palmetto Promise Institute in 2013 alongside DeMint and has developed deep connections in the Palmetto political world.

Weaver’s debate performance was what one would expect from someone with such a political pedigree – polished and well-rehearsed.

Greenville, S.C. school board member Lynda Leventis-Wells performed better than she did at the last debate FITSNews attended, appearing more confident and collected (at least until the end of the debate.)

Leventis-Wells has something that none of the other Republican candidates have – a million-dollar smile. Her personality overflows, exuding “I’d have a beer with her” appeal. She also has extensive education experience – teaching high school students, college students and even law-enforcement officers over the course of her career.

This debate started at 7:15 pm EST and ran well past 9:00 – candidates, attendees, and at least one member of the media were tired, hungry, all-together ready to get the hell out of there by the end of the debate.

Leventis-Wells was perhaps the most eager.

When moderator Stephanie Berquist announced that candidates were invited to stay longer to continue to answer questions, Leventis-Wells made like Snagglepuss and exited stage left incredibly awkwardly – citing an “Uber waiting to take her to Greenville.” Leventis-Wells took the better part of a minute to find the exit of the stage and then scooted out through the crowd.

It doesn’t take a top-flight political consultant to conclude that ending an otherwise strong performance by fumbling for an early exit is political malpractice.

Dr. Kizzi Staley Gibson of Lexington, S.C. is a professional educator who earned heathy rounds of applause multiple times throughout the debate, notably for her support of the Hillsdale 1776 historical curriculum. Gibson comes from a family of educators and has spent her career in the classroom. Her answers were once again substantive and reflective of her intimate knowledge of the issues facing South Carolina educators and students.

When I spoke with parents after the debate many of them expressed their support for or interest in Gibson’s candidacy. While she lacks the funds and institutional support of Maness or Weaver, the parents I spoke with indicated this is a large part of her appeal.

Travis Bedson, CEO of the Lowcountry-based CNT Foundations, stood out as the only candidate without a background in education.

FITSNews previously obtained and reported on records which showed Bedson was arrested on a grand larceny charge in 2015 and a pair of assault and battery charges (one in 2015 and another in 2016). He also has a drug arrest from 2008 on his record.

“The disposition of the charges against Bedson is not immediately clear, although none of them currently appear on the S.C. ninth judicial circuit’s public index – suggesting they may have been expunged,” this outlet noted last month.

Candidates were asked whether they had been arrested and the outcome of any of the charges filed against them. Bedson told the audience he believes that as a South Carolinian, we have a right to defend ourselves if someone puts their hands on us and that he was found to have acted in self-defense – and was acquitted. He told me after the debate that the grand larceny and drug charges filed against him were also dropped.


Bedson’s overall performance was solid, but I believe he has room to improve if he wants to become a serious contender in this race.

Bedson failed to meaningfully articulate why he is running. When I asked him what would compel a private sector person like himself to go into state government – and whether he was sure he could avoid jumping out of a window if he had the fortune of winning – he gave me a great answer.

Bedson recalled operating a piece of machinery on a job site when an employee of his failed to do the single digit subtraction necessary to move the implement. Bedson told me he has worked with numerous adults who were educated in South Carolina who were incapable of doing basic addition and subtraction.

This is a great reason to run, there is only one problem – I’m the only one who heard it.

Bedson (above) needs to make sure every audience he speaks to hears this story – a “real world” perspective which differentiates him from all of the other people on the stage.

Bedson told me he is less interested in the culture war issues that dominated first two-thirds of the debate and would rather speak about our terrible education outcomes and how we can fix them.

While I don’t believe Bedson stands a chance unless he comes down hard against CRT and Covid restrictions – (even the Democrat and Green candidate took conservative stances) – he would be wise to leverage the fact that he wouldn’t even be running if the education establishment (which his opponents are all a part of in some fashion) functioned properly. In addition to making clear he would not tolerate any “woke” nonsense – Bedson remained focused exclusively on raising the percentage of South Carolina students who can read and do basic math.

On the debate stage Bedson came off as measured, articulate, and well-informed on the policy issues. But if he is to compete with Kizzi Gibson’s experience and Ellen Weaver’s policy polish he is going to have figure out how to bring more of the charisma that he exhibited when we spoke one on one to to the impersonal and daunting task of addressing a crowd.

Bedson has loaned his campaign $250,000, which puts him neck and neck with fundraising frontrunner Ellen Weaver, whose campaign had raised $270,000 by the end of the first quarter. It remains to be seen how much of that money Bedson will spend – or how effectively he will spend it. One thing is certain, Bedson’s candidacy has the potential to change the dynamic of this race.