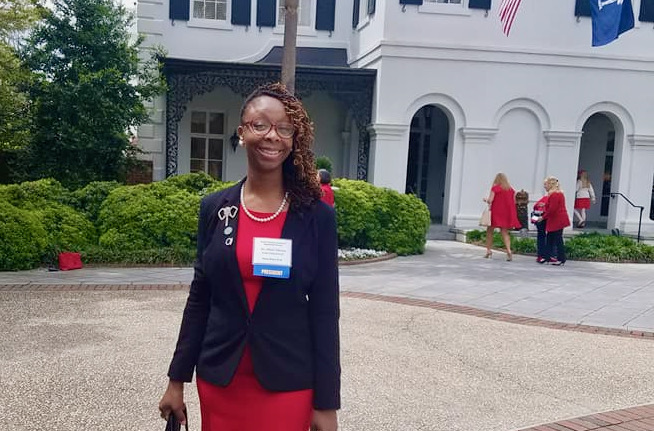 Incumbent South Carolina superintendent of education Molly Spearman will face a Republican primary challenger in the event she decides to seek a third term in office in 2022. Dr. Kizzi Staley Gibson of Lexington, S.C. told me this week she will seek the GOP nomination for this office – which Spearman has held since 2015.

Spearman told me late last week she is planning on running for a third, four-term term in 2022 …

A native of Orangeburg, S.C. and the daughter of retired educators, Gibson attended Orangeburg-Wilkinson high school. From there she received education degrees from Claflin College, Columbia College and Northcentral University. An eighteen-year veteran of the Palmetto State’s government-run school system, Gibson “has taught and served as a visual arts educator, truancy interventionist, teacher mentor, teacher evaluator, educator team leader and student mentor at numerous public schools throughout the state,” according to a biography she provided me this week.

Gibson has extensive experience in online education, including serving as a board member for South Carolina Connections Academy – the largest virtual public charter school in the Palmetto State. She is also the president of the board of the newly chartered Lowcountry Connections Academy – which is scheduled to open this August.

In addition to her career in education, Gibson is active in Republican party politics. According to her bio, she has served two terms as president of the West Metro Republican Women’s organization in Lexington county, S.C. She has also served as the second congressional district director for the South Carolina Federation of Republican Women – and has been a GOP precinct president in Lexington county (as well as a delegate to the SCGOP convention).


Why is she running for office?

“I believe our state deserves a vibrant leader who will take a unique community approach to bridging the gaps and tackling the challenges our educators, students, and communities face,” Gibson told me. “I understand the impact of intentional listening, transparency, collaboration, and accountability; these actions cultivate trust, growth, and valuable partnerships that will ultimately catapult our students and educators into greatness.”

Gibson said her campaign will focus on the following areas …

Whoever wins the GOP nomination for this office will have the inside track on victory next November – as Democrats have not won a statewide office in the Palmetto State since 2006. That’s the year former superintendent Jim Rex beat ex-SCGOP chairwoman Karen Floyd by just 455 votes (out of more than a million ballots cast).

Rex has since left the Democratic party …

Spearman is a former Democratic member of the S.C. House of Representatives who switched parties in 1995. Prior to assuming office as superintendent six-and-a-half years ago, the 67-year-old native of Prosperity, S.C. led the über-liberal S.C. Association of School Administrators (SCASA).

As I have often noted, South Carolina has one of the worst government-run education systems in America – a system which, not coincidentally, also ranks at or near the bottom of most academic freedom rankings.