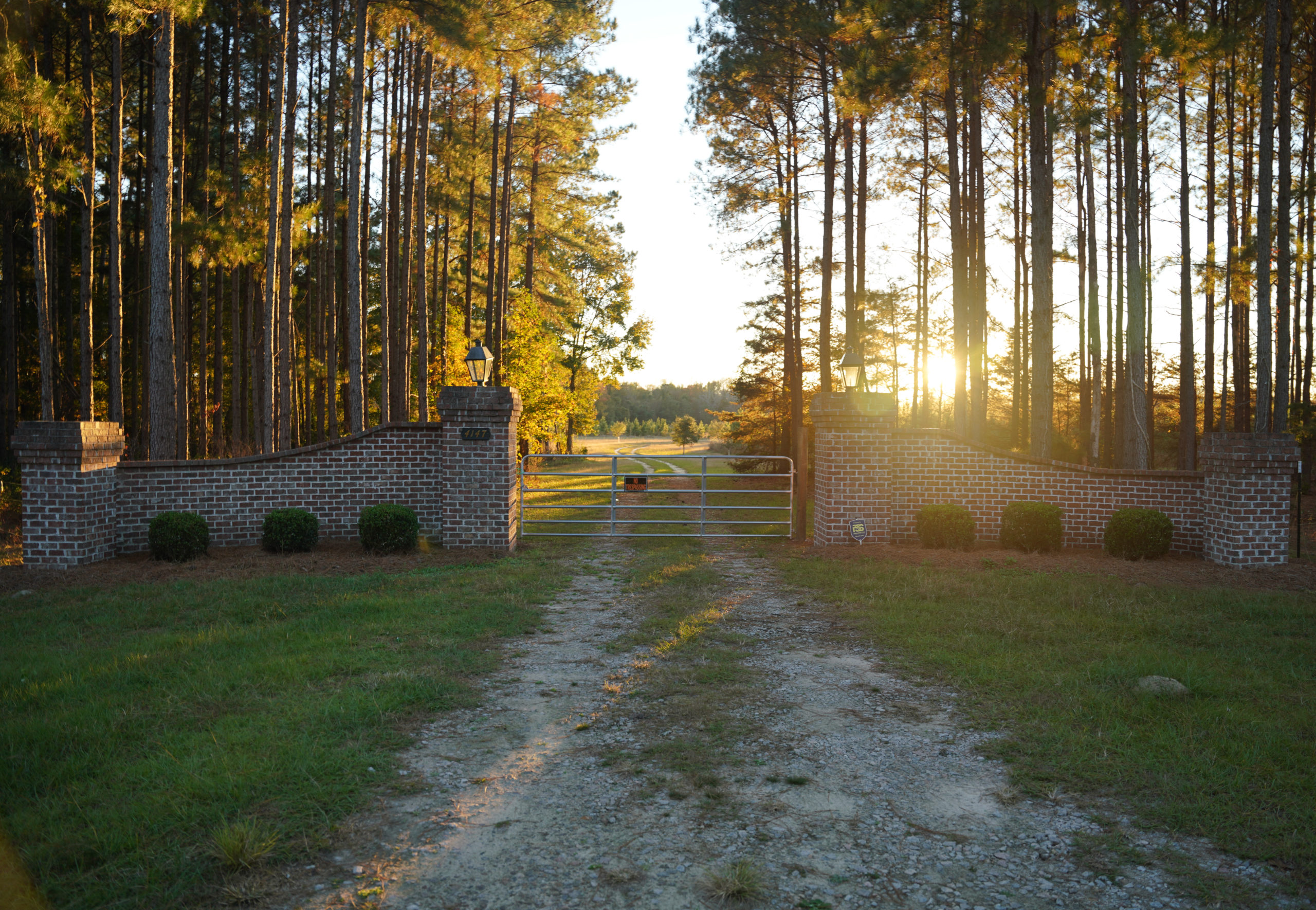 To understand Alex Murdaugh’s potential ties to drug trafficking and find answers to the many questions about the missing money in the Murdaugh Murders Saga, we need to look at a man who was a good friend of the family. A man named Barrett T. Boulware.

In today’s episode of the Murdaugh Murders Podcast, Mandy Matney, Will Folks and Liz Farrell dig deep into the Murdaugh family’s past and take a close look at Alex Murdaugh’s ties to Boulware.


Boulware died of cancer in 2018, but ever since June 2021, when Maggie and Paul Murdaugh were found dead on the Moselle property — which was previously owned by Boulware — FITSNews has been getting a slew of tips about the alleged drug smuggler and his questionable business relationship with Alex Murdaugh.

Below is a timeline of events — by our researcher Jenn Wood that shows the Boulwares’ relationship with the Murdaughs.

January 1949: Thomas M. Boulware and Randolph “Buster” Murdaugh II worked on the same civil case on behalf of the plaintiffs in Ridgeland Box Mfg. vs Sinclair. Buster Murdaugh was the solicitor at the time.

December 1951: In Beaufort County vs Jasper County, Buster Murdaugh and Thomas M. Boulware worked together for the respondents in the SC Supreme Court case.

According to The State newspaper:

February 1983: Bahamas Drug Bust — 17 tons of marijuana were seized from a shrimp boat in the Bahamas, according to the Tallahassee Democrat.

Panama City Attorney E.J. Lewis and a man known as “Red” (identified as William O. Lane) were sought in connection with the bust.

Barrett Boulware’s father was also charged. Branch was the captain of Boulware’s boat, the Jeannine Anne.

April 1983: Franklin C. Branch, the star witness in the case against the Boulwares was killed in an apparent vehicle vs. pedestrian incident in Tallahassee, Fla. According to the Tallahassee Democrat (below), Branch was on his way to a bar one night in St. Joe Beach when he “he “walked into the path of an oncoming vehicle.”

The article noted that Branch was “scheduled to testify in a drug trial at the time of his death.”

1983: Charges were dropped against both of the Boulwares “after a key government witness was killed when he stepped in front of a car.

Four others were convicted.

May 1983: U.S. District Judge Falcon B. Hawkins barred federal government from re-indicting Barrett Boulware and his father, stating “the grand jury could not present the same charges against Boulware to a grand jury a second time.”

See an article in the Columbia Record below for more details.

Late 1980s: Barrett and his wife were sitting in the backseat of a car she had rented for a trip from North Carolina to Miami and back. They were stopped for speeding right near the Georgia and South Carolina line in Chatham County — which is where Savannah is. This is not too far from where we live in Beaufort County and not too far from Hampton County and Allendale County, where the Boulwares lived at the time.

The couple were stopped by a state trooper, who noticed that Barrett had been sitting upright in the car when the traffic stop was initiated but by the time the officer approached the stopped vehicle Barrett had suddenly fallen fast asleep on his wife’s shoulder. The trooper grew suspicious and asked for permission to search the car.

The driver said he had no objection to a search and the front seat passenger, opened the glove compartment and pressed the button to pop open the trunk, where there was 7 pounds of marijuana and 28 grams of cocaine.

Barrett, who was now fully awake, immediately got out of the car to tell the trooper that neither the driver nor the front seat passenger had the authority to grant the search. But by the then the trooper had seen the drugs.

Barrett eventually gave his consent to search the trunk but refused to sign a written authorization. In addition to the drugs in the trunk, pot was also found in Mrs. Boulware’s purse.

November 1988 Jeannine and Barrett tried to appeal the decision and were denied. FITSNews could not find any record of the Boulwares going to prison.

Click below to see the full details of this case.

Click below to see a full video by Dylan Nolan showing the properties own Alex Murdaugh and Barrett Boulware.

July 2018: On July 6, 2018, Boulware granted power of attorney to Alex Murdaugh – authorizing his attorney and business partner to “lease, let, take possession, bargain, sell, assign, convey, pledge, mortgage and encumber, repair, insure and generally manage any and all property, both real and personal, which I own, or may hereafter acquire from any source.”

The instrument Boulware signed just prior to his death also authorized Murdaugh to “sign, execute and deliver any and all legal documents” in his name, and to “deposit any monies received from any source whatever for me, and in my name with any bank, and to draw and deliver checks in my name against said monies and other monies to be deposited in my name or to my credit.”

Boulware further authorized Murdaugh to “do all things necessary concerning any insurance policies, including the right to change beneficiary,” and was even granted control over “decisions regarding my health and healthcare.”

Finally, the document made clear any decisions made by Murdaugh regarding Boulware’s assets would be “binding on myself and my heirs.” 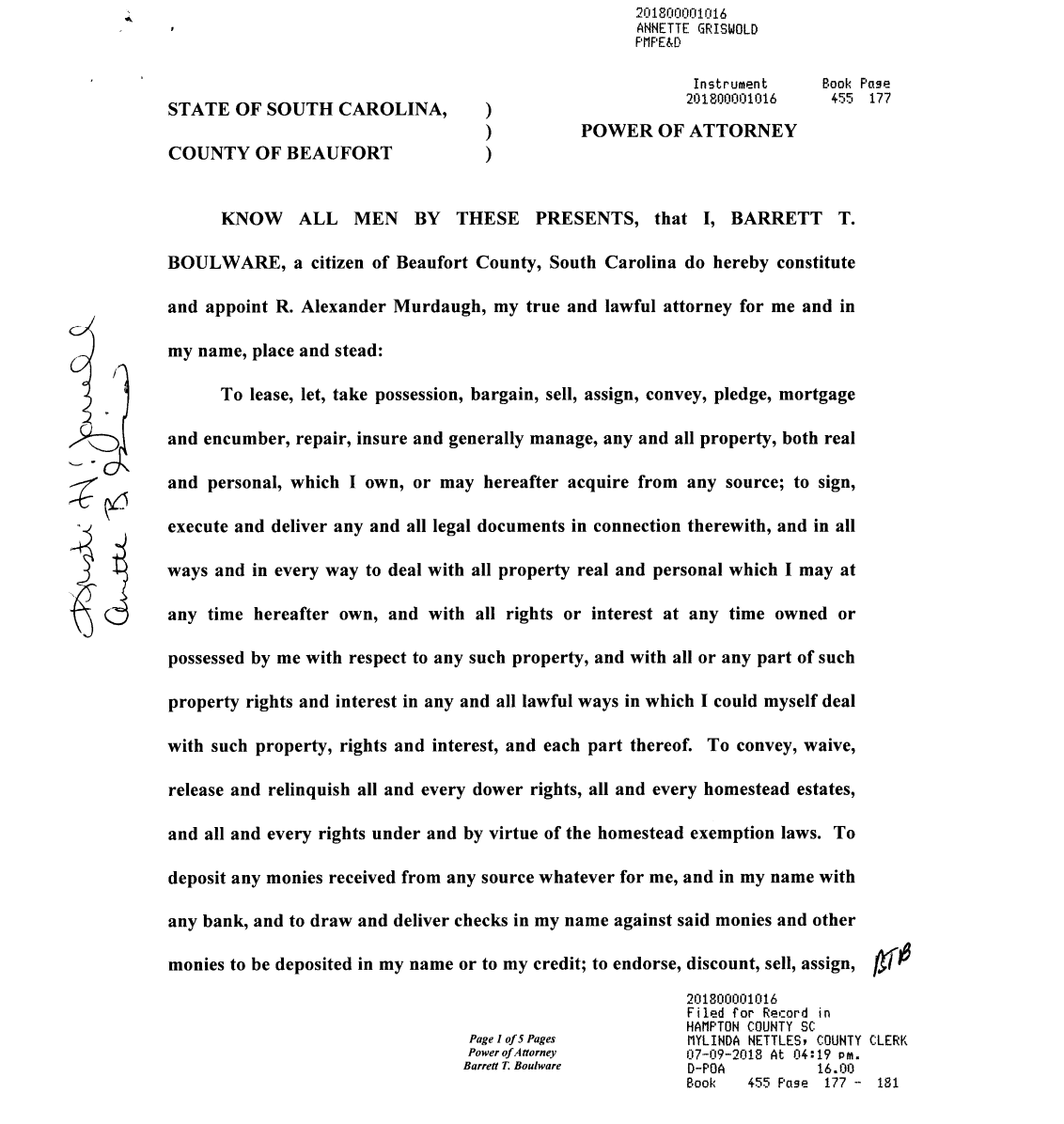 -Will Folks, Liz Farrell and Mandy Matney contributed to this report.

Once Maggie was murdered the next person to text her (after Alex) was Jeannine Boulware. Check it out.

I saw that! Jeannine “I sent her that picture” – what picture? what’s that all about.