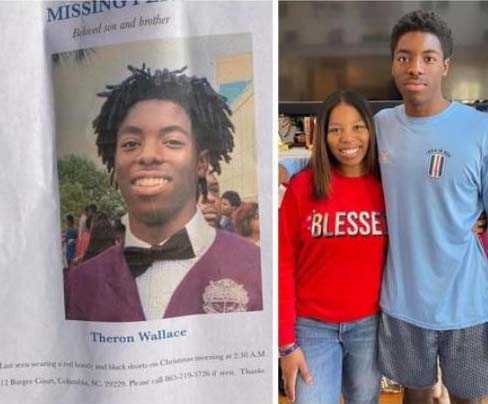 Officers with the South Carolina Department of Natural Resources (DNR) and members of Richland County coroner’s office recovered the body of an unidentified black male at Lake Carolina in northeast Richland County on Tuesday evening. The coroner identified the deceased as a black male, but declined to provide further identification prior to completing a full autopsy.

The discovery of the body comes on the heels of a multi-day search for 20-year-old USC Aiken student Theron Wallace.

Wallace “loves the lake, he loves to meditate, he loves to sit in the woods, he loves to walk trails,” according to Chandra Cleveland, a private investigator hired by the Wallace family to assist in the search.

Cleveland told Tai Wong of WLTX TV-19 (CBS – Columbia, S.C.) “it wasn’t unusual for him to go out, what is unusual is for him to not come back.”


Wallace frequently began his day kayaking, but when he didn’t return home on Christmas morning his family became worried and began searching for him.

Wallace’s kayak and paddle were recovered on Christmas day, marking the onset of what would become a ten-day search involving numerous law enforcement agencies and members of the community who knew and loved Wallace.

Again, the body which was discovered yesterday has not been officially identified by the coroner’s office. FITSNews will update this story as more information becomes available.

Update: The Richland County Coroner’s Office has confirmed that the body recovered yesterday is Theron Wallace.

Ravenel: Graham’s Contempt For Freedom Must Be Challenged