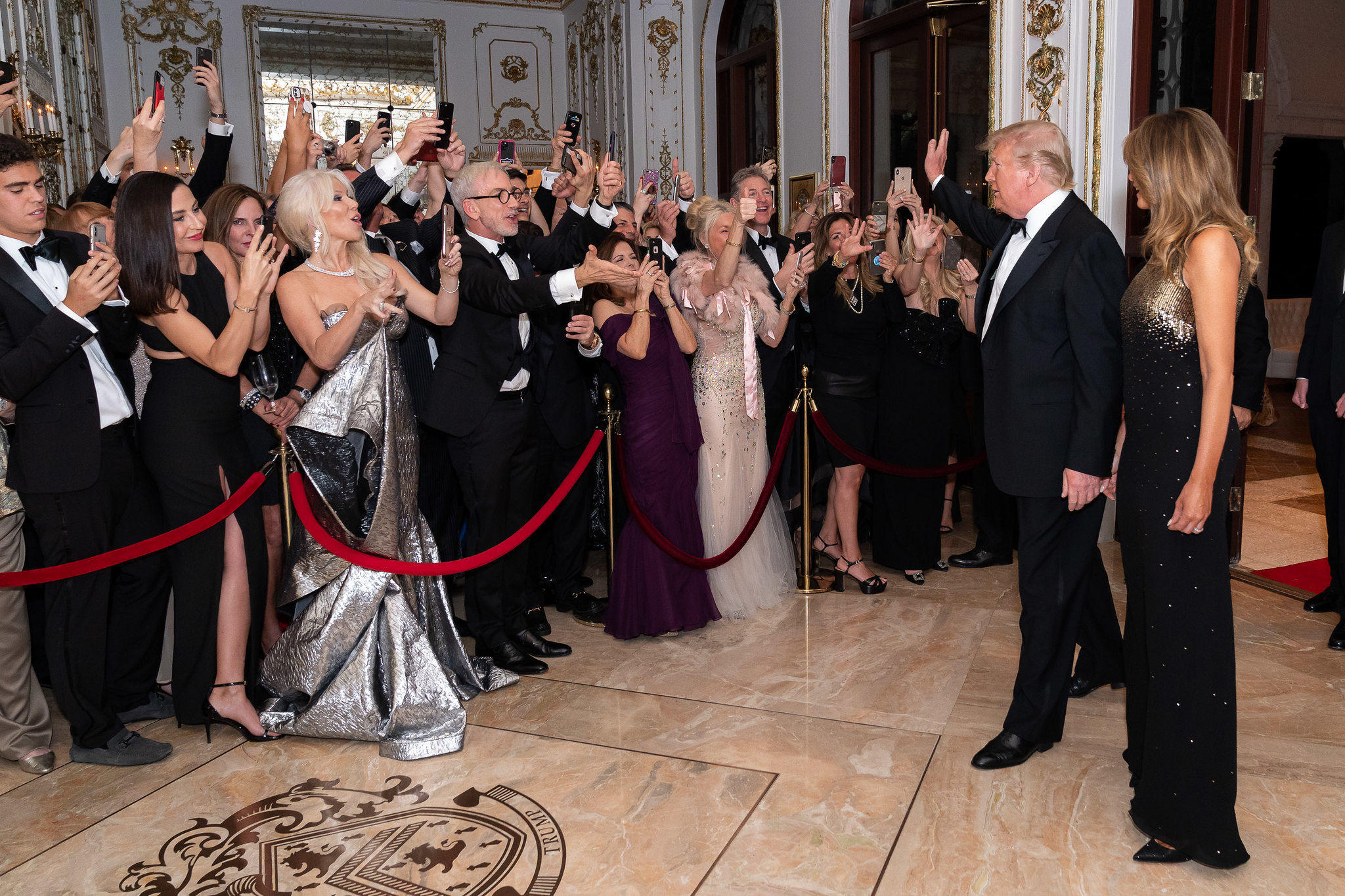 The termination of former U.S. president Donald Trump’s top political advisor last month may have had less to do with allegations of inappropriate sexual conduct and more to do with a battle for control of the massive “Republican” money machine revolving around the populist billionaire, multiple sources familiar with the situation have told this news outlet.

Longtime Trump advisor Corey Lewandowski lost his job earlier this month because he allegedly made unwanted sexual advances toward the wife of a GOP donor at a fundraising event in Las Vegas on September 26, 2021. And while these allegations are eminently credible – there may have been more to his ouster than meets the eye. In fact, sources close to the situation insist the recent “takedown” of Lewandowski was part of a concerted effort by GOP strategists – including many in Trump’s immediate orbit – to protect their financial interest in WinRed, a controversial fundraising platform founded by the GOP establishment ahead of the 2020 election cycle.

According to these sources, Lewandowski has been eager to drive a wedge between Trump and this Republican fundraising apparatus – telling the former president he has been diluting his political capital by continuing to engage in joint operations which disproportionately benefited the party while alienating his legions of small dollar donors.

To be perfectly clear: I am not saying the allegations leveled against the 48-year-old strategist are unfounded. Far from it. In fact Trashelle Odom, wife of GOP donor John Odom, has made some very specific, seismic claims against Lewandowski – and witnesses have backed her version of events, according to reporter Alex Isenstadt of Politico.

Odom (above, with her husband) told Isenstadt that Lewandowski “repeatedly touched me inappropriately, said vile and disgusting things to me, stalked me, and made me feel violated and fearful” when the two attended a private charity event held at the Westgate Las Vegas Resort and Casino last month.

This is not the first time such allegations have been leveled against Lewandowski, either. In 2017, Joy Villa – a singer and Trump supporter known for her flamboyant fashion sense – accused Lewandowski of slapping her buttocks during a holiday party at the Trump International Hotel in Washington, D.C.

Also, Odom provided a lengthy statement to officers of the Las Vegas Metropolitan police department detailing the alleged harassment she claimed to have endured at Lewandowski’s hands. Providing such a detailed, narrative-driven account of her version of events certainly ups the ante.

According to the 32-year-old Boise, Idaho native, Lewandowski “aggressively” came on to her during the charity event – touting his penis size and sexual longevity while making multiple attempts to touch her body (including her buttocks).

“His behavior was so aggressive that others began to notice and another guest even came over to ask if I was okay,” Odom wrote in her statement for police.

When Lewandowski’s advances were rebuffed, he allegedly “threw his drink” at the donor’s wife and called her “stupid,” according to Odom’s statement.

Lewandowski also allegedly engaged in stalking behavior – pacing in the hall outside of her hotel room, according to the statement. Odom told police this particularly upset her given Lewandowksi’s purported claims to have “stabbed a man in the back of the head and killed him.”

One especially interesting item from the police report? A reference to South Dakota governor Kristi Noem – a top 2024 presidential prospect who attended the event and who was being advised by Lewandowski at the time. According to Odom, Noem not only witnessed her former advisor’s harassing behavior – at one point she said “that she had texted Corey to stop touching me.”

That’s a pretty specific, verifiable point of reference … and yet another indicator of the extent to which Odom’s allegations against Lewandowski should be taken seriously.

“Whether Noem was among those who noticed or whether she heard about Odom’s predicament secondhand, (she) was aware of what her advisor was doing, told him to stop it, and told Odom that she had told him to stop it,” Cory Heidelberger of the self-described “true liberal” Dakota Free Press wrote earlier this month.

Assuming Odom’s account is accurate, that would be a fair characterization of the situation …

In a bizarre caveat, Noem felt compelled to go on the record shortly after the Politico story broke to refute allegations that she and Lewandowski – both of whom are married – were having an extramarital affair.

“These rumors are total garbage and a disgusting lie,” Noem tweeted. “These old, tired attacks on conservative women are based on a falsehood that we can’t achieve anything without a man’s help. I love Bryon (Noem). I’m proud of the God-fearing family we’ve raised together. Now I’m getting back to work.”

The affair allegations were first raised by Pedro Gonzalez of the website American Greatness, who quoted anonymous sources as saying the “alleged fling” involving Noem and Lewandowski had reportedly “continued for months” and was an “open secret” among Trump intimates at the former president’s Mar-a-Lago Club in Palm Beach, Florida.

Gonzalez’s piece was hyper-critical of Noem (above), saying she “has a habit of saying one thing from the saddle of a high horse and doing another.” He also accused the South Dakota governor of deriving political benefit from the alleged affair – essentially using sex to advance herself on the national stage.

“Lewandowski has played a key role in boosting Noem’s clout with Trump,” Gonzalez wrote, claiming the strategist “still has the former president’s ear, which he reportedly uses to Noem’s advantage.”

While the Noem affair rumor probably would have died had she not chosen to amplify it with a denial (sound familiar, South Carolinians?) the fallout from the sexual harassment allegations against Lewandowski came swiftly. Roughly eight hours after the Politico report was published, Trump spokesman Taylor Budowich issued a statement announcing that former Florida attorney general Pam Bondi had replaced Lewandowski as the leader of MAGA Action, a super PAC affiliated with the former president.

“Corey Lewandowski will be going on to other endeavors and we very much want to thank him for his service,” Budowich tweeted. “He will no longer be associated with Trump World.”

The following day, Noem severed her ties with Lewandowski.


Again, these decisions further underscored the credibility of the allegations made by Odom. However, they do not rule out the possibility that other factors could have been at play in his latest fall from grace – especially given the danger Lewandowski was purportedly posing to the GOP’s cash cow.

Trump’s fundraising collaboration with WinRed during (and after) the 2020 election has been the subject of considerable controversy. For example, the maze of entities affiliated with his erstwhile (aspirational?) presidential campaign is beyond confusing. As is the co-mingling of these entities. Also, there have been allegations that Trump (or entities raising money on his behalf) have misled donors as to the purpose of their donations – especially as it relates to his ham-fisted effort to challenge the 2020 election results.

“The president deceived his donors,” former Federal Election Commission (FEC) attorney Adav Noti told reporter Peter Stone ofThe (U.K.) Guardian two months ago. “He asked them to give money so he could contest the election results, but then he spent their contributions to pay off unrelated debts. That’s dangerously close to fraud. If a regular charity – or an individual who didn’t happen to be president of the United States – had raised tens of millions of dollars through that sort of deception, they would face a serious risk of prosecution.”

One source of these “unrelated debts?” Refunds issued to angry donors who were allegedly duped by WinRed into making excessive, recurring contributions to the platform ahead of the 2020 election. According to reporter Shane Goldmacher of The New York Times, Trump’s small-dollar donors were tricked into making recurring contributions – and participating in multiplier “money-bombs” – as part of an “intentional scheme to boost revenue.” This forced the campaign to issue more than $64.3 million in refunds when donors complained. Still, the money “amounted to an interest-free loan from unwitting supporters at the most important juncture of the 2020 race.”

WinRed was created under the guise of helping the GOP compete with Democrats in terms of collecting small dollar donations online.

“There’s a reason President Trump and all the major campaign committees are united behind WinRed: It has the best technology and data integration that will lift all conservative boats and actually help Republicans win in 2020,” former Trump campaign manager Brad Parscale told reporter Susan Crabtree of Real Clear Politics in July 2019.

A follow-up report by Crabtree revealed the depth of discord behind the scenes, though, with national GOP leaders accused of engaging in “strong-arm tactics, threats and legal action to try to force all GOP campaigns onto their preferred online fundraising platform.”

“Many state party officials and campaign operatives are incensed over the effort to give WinRed an online fundraising monopoly, and they view it as a money and data grab that, counter to conservative philosophy, violates basic free-market principles,” Crabtree reported.

Crabtree also cited privacy concerns, noting that WinRed “does not control how political campaigns and political committees use or share donor information” and that this invaluable info “can be shared with its business partners for myriad purposes.”

At the time of the Odom incident, Lewandowski was reportedly making headway with Trump on a more elemental argument – convincing him that he didn’t need the GOP apparatus to raise money, and that WinRed was in fact hurting him with the very donors he would need in order to mount a successful 2024 campaign.

“Trump never understood that the party needed him more than he ever needed the party,” one strategist familiar with those conversations told me.

Stay tuned … this news outlet will continue working its network of sources in the hopes of obtaining additional information on these high-level fissures with the GOP establishment. We will also keep digging on the various machinations of those eager to keep control of the party fundraising apparatus.