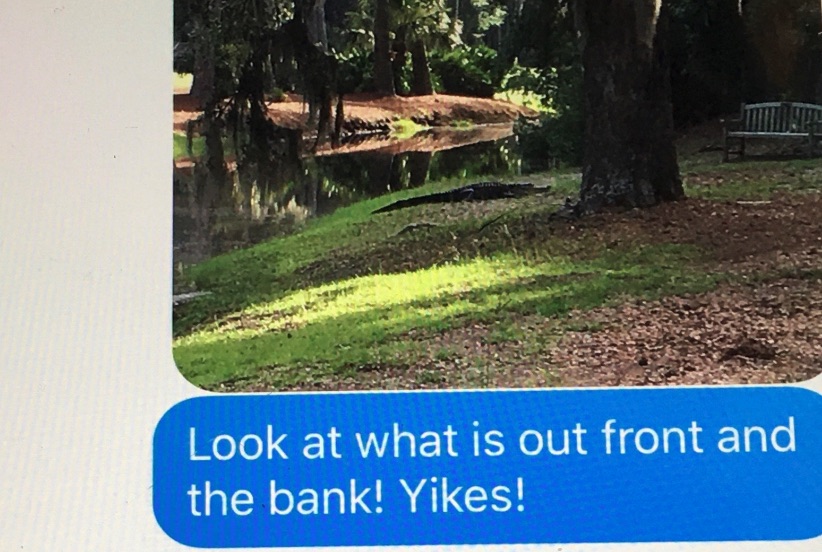 Seven weeks before 45-year-old Cassandra “Sassie” Cline was killed by an alligator on Hilton Head Island, she texted her friend and husband a photo of an alligator sunning near the lagoon across the street from her home.

“Are you kidding! I am not going anywhere near him,” Sassie Cline replied. “A CSA (Community Services Association) truck just drove by. Hopefully they will take care of it. If we don’t come back you know what ate me for breakfast! LOL.”

On August 20, 2018, two workers watched helplessly as a 9-foot alligator drug her into that lagoon across from her house and killed her.

In 2019, Sassie’s husband James Cline sued the Sea Pines Resort, CSA, and the Sea Pines Country Club for wrongful death. The lawsuit claims the gated community should have removed the dangerous alligator before the attack.

Last week, more than 1,000 pages of depositions that reveal tragic details about Cline’s death — including the text messages above — were published as a part of the ongoing suit. Sassie’s friend testified that he believed the alligator in the photo was the one that killed her. He said it was significantly larger than the other alligators in Sea Pines.

In the latest court filings, the attorneys representing the Sea Pines Resort are asking for a summary judgement. Attorneys argue that the resort does not own the land or the lagoon where the incident occurred, and it is not responsible for alligator management in Sea Pines.

Further, attorneys for the Sea Pines Resort claim that Cline was very much aware of the dangers of alligators and knew they often preyed on dogs.

Sea Pines Resort officials claim that Cline “voluntarily exposed herself electing to walk her dog in close proximity to the lagoon instead of walking her dog on the opposite side of the street, knowing that a large alligator was spotted (by her) on the bank of the premises where she walked just prior to the incident.”

Before the deadly attack, Cline’s neighbor saw her standing at the end of her driveway with her dog, which was not on a leash, according to a deposition. Cline was holding her phone and a leash as the neighbor drove by.

One of the workers said he saw Sassie Cline sitting in the sand halfway between Governor’s Road and the water, according to depositions. The alligator, a few feet from Cline, grabbed her dog by the hind legs.

Within a few seconds, the dog escaped the alligator’s mouth, according to depositions.

“The dog was tucked in her arm, and then the dog got away,” one of the workers said.

The alligator then snatched Cline. There was “at least 14 feet of drag mark on the bank side” of the lagoon, according to depositions.

“To me it looked like the alligator had her by the…forearm…..And then it proceeded to drag her in the water,” one of the witnesses said.

The two men tried to throw rocks and poles at the alligator as it submerged Cline.

Cline was pronounced dead at the scene and the alligator was euthanized.

In deposition, one of the employees said that he believed Cline died trying to protect her dog.

“Personally, I think it all took place because she was trying to save her dog,” he said.

Neither worker could remember seeing a leash on the dog at the time of the attack.

In a recent court filing, attorneys for the Sea Pines Resort theorized that Cline was retrieving a golf ball at the edge of the lagoon when she was attacked because investigators found a golf ball next to her shoe.

A family friend of the Clines told attorneys he rejected a lot of the news coverage that he felt made Cline look like a “dumb woman.”

“Sassie would always have protected her dogs,” Sassie’s friend said. “They were her children, and I remember making comments to people about that.”

He said that news reports made Cline look like a “fool” for protecting her dog.

“I know how Sassie felt about her dogs and she would have protected them in any way,” he said.

Several numbers testified that they saw Sassie walk the dog without a leash often. However, Cline’s family members said she always had her dog on a leash.

Sea Pines officials recovered a leash from the lagoon, but never determined if it was on the dog, according to depositions.

Since then, there have been two other fatal attacks — Cline in 2018 and Cynthia Covert on John’s Island in 2020.

After every alligator attack resulting in human injury or death, SCDNR experts conduct an investigation where they  interview witnesses and examine the gator to see if there is evidence of feeding by people, injury, or disease.

Hart said in all three fatal incidents, there was no evidence that the alligators in question were hand-fed.

“While there is no evidence that any of the fatal encounters involved alligators that were fed, feeding alligators is illegal and can result in animals that associate people with food, which increases the likelihood of negative interactions,” Hart said. “No one should feed an alligator, whether intentionally or unintentionally [feeding turtles/fish where alligators are present, cleaning fish over water, etc].”

However, we do know that the Hilton Head and Kiawah alligators were killed after the incident.

“Generally, ‘nuisance’ alligators are found in a typical alligator habitat where the property owner or member of the public demands its removal,” Hart said.  “These alligators may have been habituated to people, have been feed by people, or may not exhibit appropriate fear of humans, though this is not always the case.”

SCDNR spokesperson David Lucas previously said that the agency receives between 1,300-1,500 complaints about alligators every year.

About 300 of those gators are killed, he said.

Cline, a part-time Hilton Head resident, “told everyone” about how dangerous alligators can be — especially to pets.

James Cline’s lawsuit claims that Sea Pines Resort, CSA, and the Sea Pines Country Club “were aware of the problems with alligators” and “had a duty to keep the premises free of hazards to the public, to include aggressive alligators.”

Specifically, the lawsuit claims that gated community officials were aware of the aggressive nature of the particular 9-foot alligator before it attacked Sassie.

However, attorneys for the Sea Pines Resort argue that alligators are wild animals and the resort should not be liable for their actions.