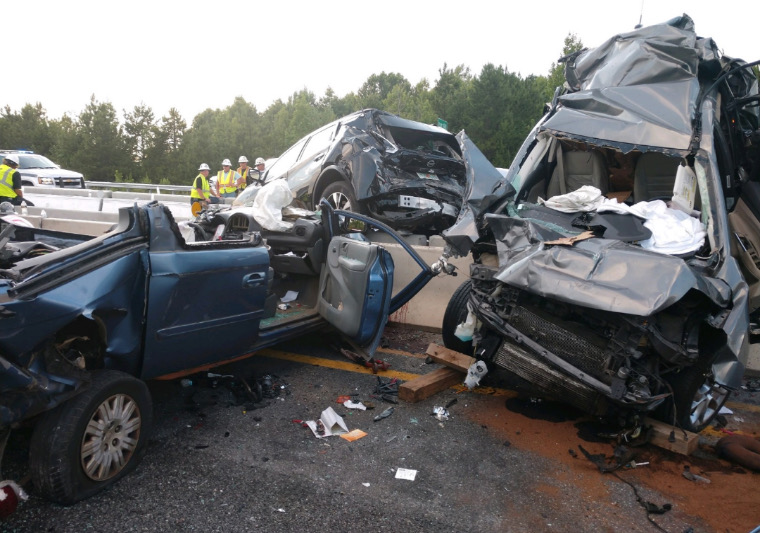 Over the weekend, I filed an extensive report on an unfolding infrastructure situation in the South Carolina Upstate. My report focused on a fatal crash that occurred in a construction zone on Interstate 85 in Cherokee county – one of several recent accidents which has drawn the ire of local officials.

Anyway, in the aftermath of filing that report I was contacted by a source who has been following this situation closely – and who was on the scene in the immediate aftermath of the latest crash, which killed three people and seriously injured another six.

The crash took place when a tractor trailer was reportedly attempting to traverse one of the S.C. Department of Transportation (SCDOT)’s single-lane “chutes” in the southbound lane of the Interstate 85 construction zone. These “chutes” have been erected to route traffic around various widening and interchange expansion projects – part of a long-overdue upgrade of this critical southeastern artery.

The crash is under investigation by the S.C. Highway Patrol (SCHP), but initial reports indicate the tractor trailer started a horrific rear-end collision – one that resulted in multiple vehicles in the southbound lane being hurled over a concrete barrier into the northbound lane.

How bad was the crash?

“These chutes should be called death traps,” Cherokee county coroner Dennis Fowler said in the aftermath of the latest crash.

Meanwhile, a petition calling on state officials to remove them has drawn nearly 9,500 signatures in less than three days.

While SCDOT is (rightfully) taking serious heat over the situation, one source familiar with the latest accident told me that it is important not to completely discount personal responsibility – attributing the blame for most of the recent collisions on individual motorists.

“Eighty percent of those wrecks on Interstate 85 were (due to) the driver not the construction or rerouting of lanes,” this source told me.

As for the most recent crash, the source said it was “100 percent” the fault of the tractor trailer driver, who was allegedly “in the wrong lane, speeding, didn’t slow down at stopped traffic and plowed six other vehicles.”

So, where does the blame lie for all the carnage on Interstate 85 … with individual motorists? Or with the road they are attempting to navigate?

My news outlet will do its best to answer that question as it continues to follow this unfolding story. More importantly, I will continue doing my best to hold elected and appointed officials at all levels of government accountable for how they spend the infrastructure dollars taxpayers entrust them with – urging them to reject crony capitalist projects and instead focus resources on critical unmet needs.