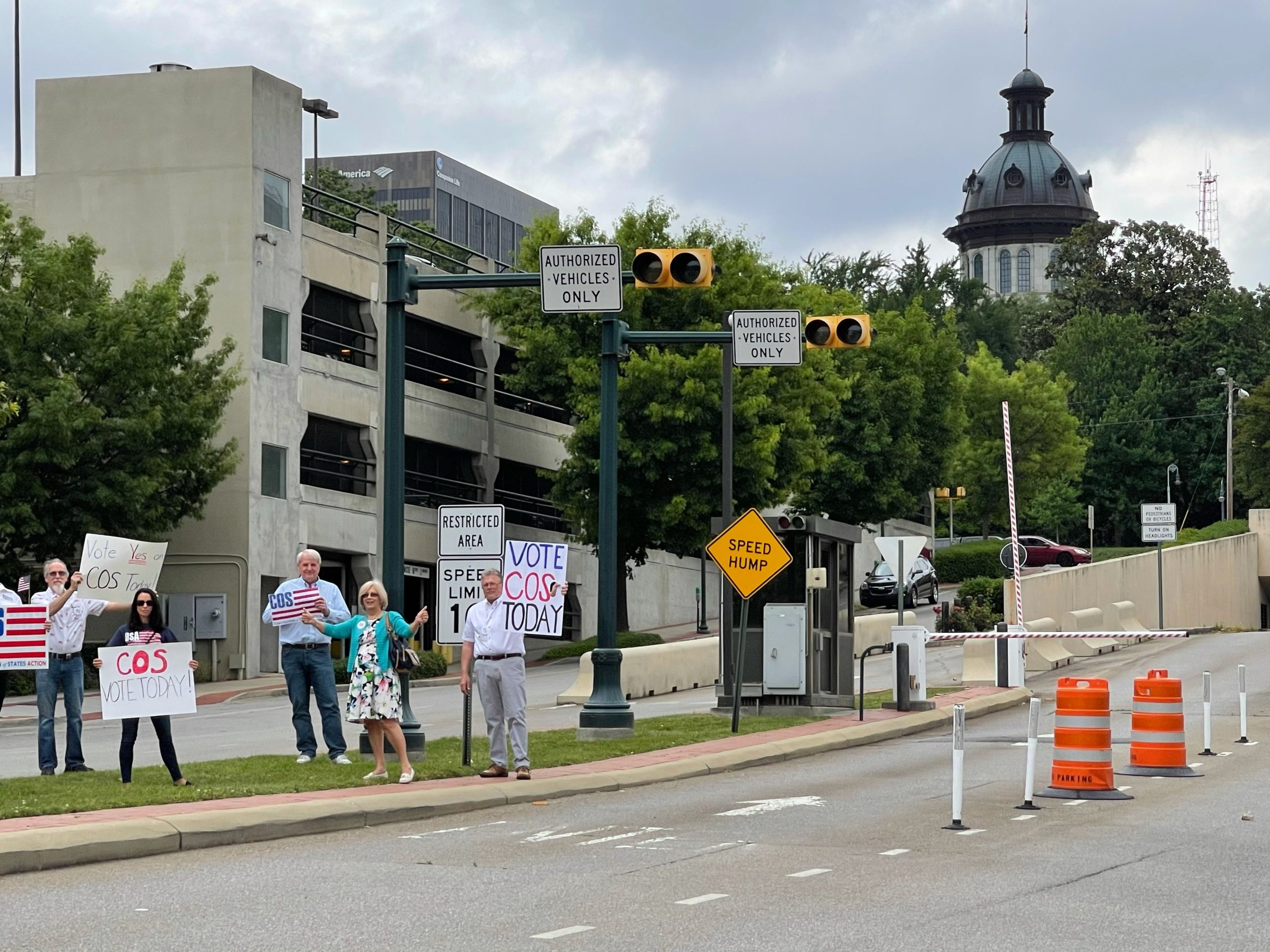 Buoyed by their recent legislative successes, supporters of an Article V convention – or “convention of states” – descended upon the South Carolina State House this week as their preferred legislation appeared poised for passage in the S.C. House of Representatives.

Lawmakers who spoke with me on Tuesday morning said the legislation – H. 3205 – had more than seventy committed “aye” votes (including the vote of powerful speaker of the House Jay Lucas). That would obviously be more than enough votes for it to clear the 124-member “Republican-controlled” chamber.

Supporters of the legislation cheered and toted signs on Tuesday morning as they staked out multiple entrances to the S.C. State House garage – a multi-level, underground parking facility reserved for state lawmakers and executive branch officials.

One lawmaker – state representative Jonathon Hill of Townville, S.C. – was singled out by convention of states supporters for particular derision. Hill opposes this bill, believing that Article V “neither imposes nor allows any limitations on the subject matter which may be considered” at a convention of states.

Backers of the bill who drove to Columbia, S.C. made it clear Hill was on their radar …


“Today we are going to send a message to Jonathon Hill and his shrinking handful of followers who tried to derail conservative reform,” one convention of states backer told me.

Like last year’s proposed legislation, the current Article V bill would make an application to the U.S. Congress on behalf of the S.C. General Assembly to “call an amendment convention of the states pursuant to Article V” of the U.S. Constitution.

Any proposal adopted by the convention would have to be ratified by three-quarters of the states – which is obviously a high threshold (especially in our polarized political climate).

As I have previously reported, the specific wording of this legislation matters a great deal. Convention of states supporters are fearful their national bid will be rejected unless enough states submit identically worded resolutions to Washington, D.C. Also, there are competing Article V bills to contend with, as other convention of states efforts in South Carolina have been geared specifically toward the adoption of a balanced budget amendment.

Earlier this year, H. 3205 was included as part of a conservative “pushback agenda” led by state representative Bill Taylor of Aiken, S.C.


“For those of you who fell asleep during civics class, Article V is the section of the U.S. Constitution which deals with amending our nation’s founding document,” I noted in a recent article on this subject. “An ‘Article V convention’ is one of two methods by which changes to the Constitution can be proposed – with such a convention being called in the event ‘two thirds of the several states’ make an application to congress.”

Again, though, whether an amendment is proposed by congress or by a convention of states – it must be approved by three-fourths of all states before taking effect.

Will the convention of states bill pass the S.C. House? Stay tuned to find out …