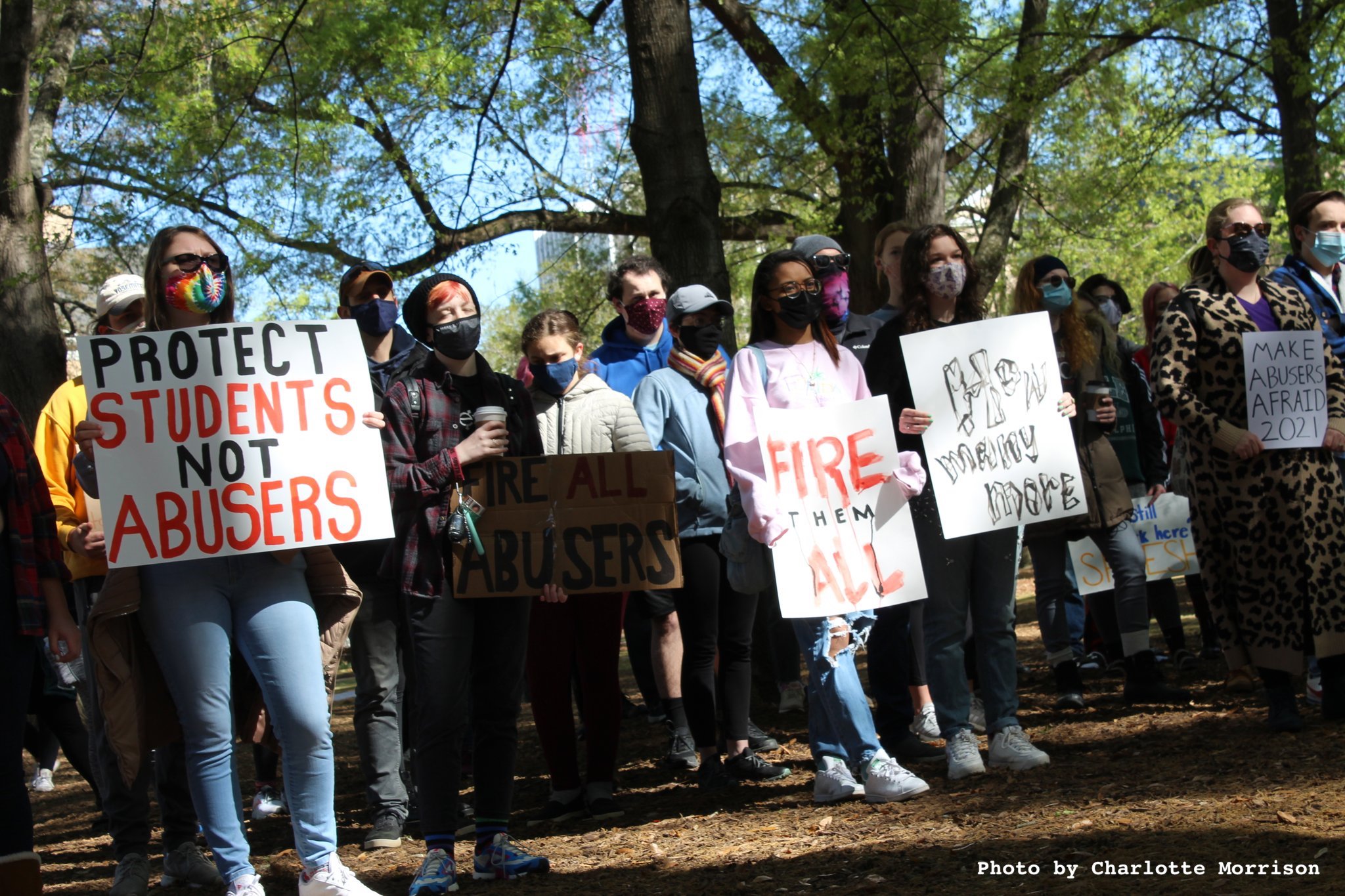 President Bob Caslen and Provost William Tate each issued statements after more than 100 students marched in a protest hosted by the Coalition to Fire David Voros last Friday.

From the moment students formed the coalition in December, they’ve been clear about their demands — for the university to fire accused abusers and change the system that enabled them.

But the university has not done that. Instead, three of the professors accused of abuse — David Voros, David Snyder, and Robert Richmond — are all being paid by the university while they are forbidden from campus and teaching duties (considered by many as a paid vacation).


In Caslen’s seven-paragraph statement, he “commended” students for taking part in the protest and said he understood that students wanted to fire the accused professors. However, he claimed that the university “has a legal obligation to ensure due process.”

The university also had a legal obligation to ensure due process to the growing group of women who now say that USC mishandled their harassment complaints.

Apparently, USC officials were willing to risk the legal ramifications when they (allegedly) ignored (at least) 10 women’s complaints and chose to keep accused abusers around students.

On Friday afternoon, the State reported that USC is “conducting legal reviews” on the four accused employees’ cases. This information was revealed in a Board of Trustees meeting, according to the State.

A USC spokesperson told the State that officials are “reviewing these cases to make sure we did everything right.”

Caslen, who has been asked several times to be transparent about the process, could have told the students this update in his email this week, but apparently chose not to.

Also, a legal review is a vague term that simply means lawyers are involved — which they should have been involved in this process from the beginning.

The coalition has been adamant that they want transparency in the investigation process to ensure that these complaints aren’t getting swept under the rug like the others — and Caslen’s statement (which took him 5 days to respond to after the protest) did not provide any details or a timeline.

One day after Caslen’s email was sent to students and faculty, USC Provost William Tate posted a video and statement on Twitter in response to the protest.

There are a lot of problems with this statement, but let’s start with the “12-hour” timeline.

Tate is speaking about USC history professor and Faculty Principal of Maxcy College Dr. David Snyder, who is accused in a lawsuit of sexual harassment, grooming and abuse from 2018 to 2020. That lawsuit was filed online on March 22.

FITSNews broke the story on Snyder on March 23 and Snyder was removed from campus duties on March 24 — two days after the lawsuit was filed.

While it’s unclear whether or not USC was internally alerted of the lawsuit on March 22, considering the amount of public attention focused on sexual harassment at USC, someone at the university should have been checking Richland County lawsuits daily. And certainly, someone at USC administration should have found out about the lawsuit before media.

What if FITSNews didn’t find out about the lawsuit? How many days would have gone by with Snyder still on campus?

And where was Tate when the new Voros accusations were made in a lawsuit last December? It took a lawsuit, several media stories, public pressure, and a group of students forming the Coalition to fire David Voros before administrators removed him from campus.

A lot of USC students did not buy into Tate’s statements.

“Perhaps remove them from the payroll altogether if you want us to feel safe, William,” one student said on Twitter. “Don’t give them a paid vacation.

That’s a lot of money to pay professors not to teach and not to be on campus.

Other students called out Tate for failing to recognize the issue at hand.

“If sexual assault and harassment have no place on campus, why did the university bungle years of claims?” a student said. “Why did a professor my freshman year require my classmates to do unrelated lap dances for an audition and literally nothing happened to him or was even said to him?”

Another person called Tate’s statement “a lot of mansplaining and no action.”

FITSNews founder Will Folks called out Tate on Twitter, too.

Keep in mind, while university administration may want you to believe these actuations are fresh, they are not.

USC has known about some of the allegations against Voros since 2016 when Allison Dunavant filed her harassment complaint. In 2018, the university settled a lawsuit on his behalf and agreed to pay Dunavant $75,000 in 2019.

Dunavant was the first to sound the alarm bells’ on USC’s bungled system for reporting harassment.

“The problem is the whole system. The way they treat victims, it’s terrible,” Dunavant told FITSNews.

Again, USC currently is currently facing four separate sexual harassment lawsuits that could cost the university hundreds of thousands of dollars. This scandal is hurting the university both in dollars and in reputation — and that will continue for as long as administrators fail to address the issue.

If administrators think students are going to forget about this by next semester, they are wrong. Student leaders have FITSNEWs the coalition will continue to protest until their demands are met.

And FITSNews will continue to report on harassment at USC…. Stay tuned…

Editor’s Note: This article was a news analysis by Mandy Matney, who has been covering the sexual harassment scandal at USC since December.