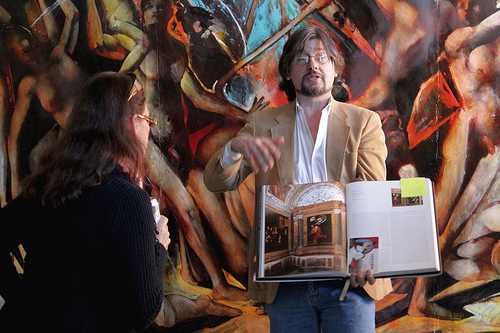 Five days after a group of University of South Carolina (USC) students petitioned for the professor who has been sued three times for sexual harassment to be fired, the university has made a step toward what many consider to be progress.

“He will instead be assigned to other duties outside of the classroom until further notice,” Stensland told FITSNews.


The State Newspaper was first to report on Voros’ change of position Tuesday morning.

When FITSNews asked Stensland if Voros would be collecting the same salary as when he was a professor, he said he didn’t have “any additional information at this time.”

To the group who has been working behind the scenes to pressure the university, this is considered a step toward progress.

The group — dubbed “Coalition to Fire David Voros” — launched a petition last week demanding that the university terminate the tenured art professor and change the system that enabled his alleged behavior.

That petition has collected more than 2,200 signatures.

“The system for reporting re-traumatized survivors and protected the predator. It has to change,” the petition said.

The coalition was formed in light of recent media coverage on the three lawsuits against Voros and USC.

But one year before those lawsuits were filed, USC settled Allison Dunavant‘s lawsuit with “the same complaints and concerns” about Voros and USC administrators, Dunavant told FITSNews in an exclusive interview last week.

Dunavant said Voros harassed, intimidated and isolated her during a horrific 2016 study abroad trip to Italy when she was a graduate student.

All three women describe similar stories — they allege Voros harassed them and the university continuously protected him when they reported his behavior.

“The University of South Carolina has failed in its duty to protect students from harm and needs to take immediate action against the offenders and to fix what is ultimately a system that enables,” the petition said.

In a settlement, USC agreed to pay Dunavant $75,000 last year for her lawsuit. Since she filed her original harassment complaint, Voros has made more than $315,000 from his university salary.

“I think it’s a step towards the right direction, although I think it isn’t enough,” Dunavant said of Voros’ position change. “He still is getting a salary from them, and he still isn’t fired.”

Dunavant said it was also concerning that USC didn’t provide a timeline for how long the tenured professor will be removed from the classroom.

While USC does protect tenured professors, it is not impossible to fire them. One of the reasons for firing a tenured professor at USC is “misconduct related directly and substantially to the fitness of the faculty member in the professional capacity as teacher or researcher.”

“I think that if misconduct questions the ‘fitness’ of a professor, then he should be fired,” Dunavant said. “He is removed from his classroom duties, barred from doing independent studies, and not allowed to take students abroad. So In what ways is he ‘fit’?”