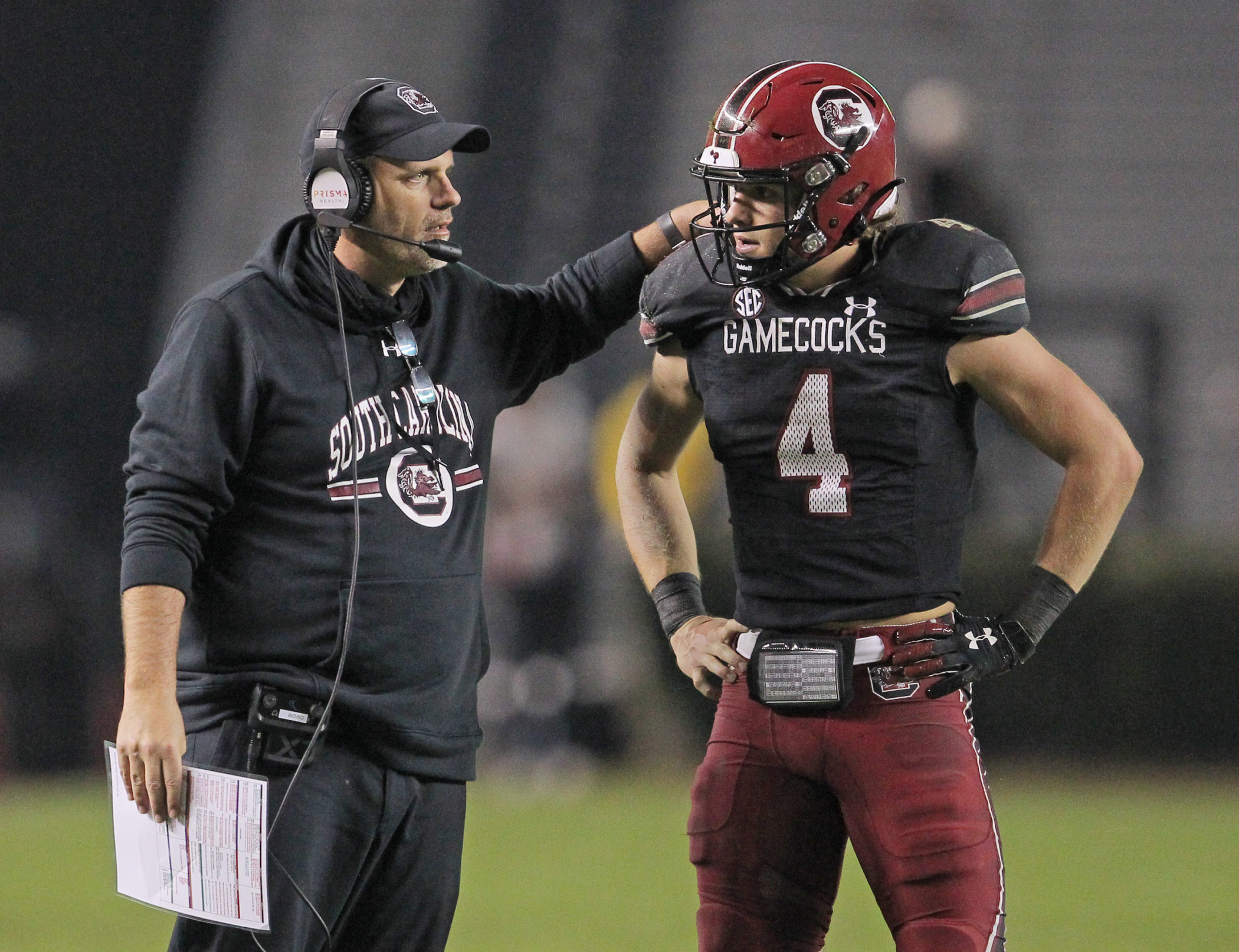 The University of South Carolina football team got a glimpse at its potential future on Saturday night, but the insertion of a new starting quarterback into its lineup – and a new head coach pacing the sidelines – failed to produce a different outcome.

Still, interim head coach Mike Bobo – who will guide the Gamecocks through the remainder of the 2020 season following the firing of former coach Will Muschamp last week – liked what he saw from true freshman signal-caller Luke Doty.

“He didn’t blink and played with confidence,” Bobo told reporters after Doty played the entire second half of South Carolina’s 17-10 loss to Missouri. “He looked like he belonged. I let him know I was proud of him. I’ve always been proud of Luke. He’s a positive guy, a team guy.”

Doty entered the game with South Carolina trailing 17-0. He led the Gamecocks (2-6) on a pair of scoring drives but also committed a costly turnover late in the game that sealed the defeat – South Carolina’s fourth in a row, sixth on the season and fourteenth over its last twenty contests.

Used sparingly in situational settings leading up to Saturday, Doty had thrown just one pass (an incompletion) and rushed only five times for 18 yards in four appearances prior to taking the field against the Tigers.

Bobo said he decided to put the 6-foot-1, 210-pound Myrtle Beach, S.C. native in the game as the team was “walking out” for the second half.

“I felt he gave us the best chance to win,” Bobo told reporters.

He was correct. Against Missouri, Doty completed 14 of 23 passes for 130 yards with one interception – a ball thrown right to Tigers’ linebacker Devin Nicholson with less than a minute remaining on the clock.

He also ran for 59 yards on 11 attempts – leading the Gamecock ground game.

Doty was reportedly eager to be coached on his late-game mistake by Bobo and newly named Gamecock quarterbacks’ coach Connor Shaw.

“I talked about the play, the coverage they were in, where we needed to go with the ball,” Bobo told reporters after the game.

Doty impressed his teammates, too.

“I thought Luke played his tail off,” senior offensive lineman Sadarius Hutcherson said after the game. “He just made something out of nothing. You can’t ask much more than that from a freshman.”

With Doty at the helm of the South Carolina offense, the Gamecocks amassed 215 total yards in the second half compared to only 68 yards in the first half under graduate senior Collin Hill – who has started every game this season.

Making the turnaround even more impressive? South Carolina played the second half against Missouri without its leading wide receiver Shi Smith – who was hurt on a helmet-to-helmet hit during the first quarter and did not return to the game.


“I learned a lot,” Doty told reporters after the game. “It was the first time I’ve been out there for a whole half and getting to play in a real game-like situation. I definitely think I learned a lot. The game is a lot faster than high school. It’s definitely something I’m going to have to keep working at and getting used to.”

Doty – who won the Palmetto State’s “Mr. Football” award in 2019 – is likely to start for South Carolina when it hosts No. 13 Georgia next Saturday at Williams-Brice Stadium. Of course the Bulldogs (5-2) are also buzzing about their new quarterback. JT Daniels – a 6-foot-3 redshirt sophomore from Irvine, California – threw for 401 yards and four touchdowns in his debut as Georgia’s signal-caller against Mississippi State on Saturday.

Despite his late-game interception (and another loss), Doty’s second half performance was one of the lone positives in yet another season of regression for South Carolina.

After winning nine games in 2017 and looking poised for a return to national glory, the Gamecocks went 7-6 in 2018, 4-8 a year ago and have now fallen to 2-6 this season (with Georgia and Kentucky remaining on the schedule).

Last week saw the official end of the Muschamp era – as well as the launch of a search to replace him. Unfortunately for Gamecock fans, that search process has inexplicably been placed into the hands of eighth-year athletics director Ray Tanner, not-ready-for-primetime president Bob Caslen and the school’s scandal-ravaged board of trustees.

Which means Doty – who will retain four years of eligibility beginning in 2021 – would probably be wise to weigh his options in terms of where he wants to play in the future.

That’s a good question. Bobo brought Hill with him from Colorado State University after Muschamp hired him as offensive coordinator a year ago.

Prior to the 2020 season, Muschamp told reporters Doty would be a factor in the offense.

“He’s one of the best athletes on our team and we need to find ways to get him on the field,” Muschamp told reporters in August, according to Collyn Taylor of Rivals. “He’s got a great competitive edge. He practices really hard. He runs a 4.4 (in the forty-yard dash) and he throws the ball extremely well.”

Still, South Carolina did not give Doty his first meaningful game action until Saturday night.

Bobo fell to 28-36 as a head coach following Saturday night’s loss, incidentally. He will look to win his first game since November 2019 next week against Georgia – where he played quarterback from 1993-1997 and where he was an assistant coach from 2001-2014 under former Bulldog head coach Mark Richt.

Santee Cooper Settlement Check: Don’t Spend It All In One Place