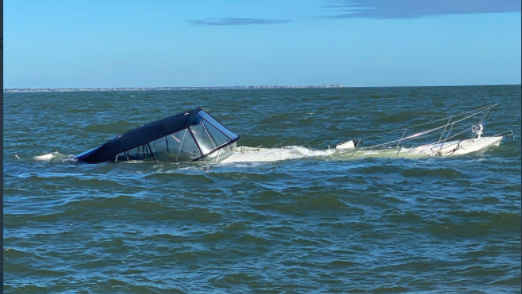 The two men called authorities when their boat started to sink around 11:16 p.m. Friday around the Charleston Jetties.

Gerry Girardeau told FITNews on Twitter he was one of the two “lucky guys” who were rescued.

He said his boat crashed into the jetties after a container ship cruised by him.

U.S. Coast Guard officials stationed in Charleston, SC responded to the scene and pulled the two men out of their boat as it was submerging.

No one was injured in the incident.


Coast Guard officials remind boaters to prepare for the worst and always have life jackets on board.

“Last night’s case demonstrates the importance of boater education and having life jackets readily available at a moment’s notice or even worn while boating,” Petty Officer First Class Jason Rieling said in the news release.. “The men had the life jackets stowed and due to the rapid rise in water in the cabin couldn’t get them on.”

A towing company retrieved the boat.

Just south of Charleston County, a fishing boat capsized on Tuesday in the St. Helena Sound.

For more than 12 hours, two boaters were missing.

Miraculously, one of the men was found off the coast of Tybee Island, Georgia the day after he disappeared.

The other man was found dead on Thursday.