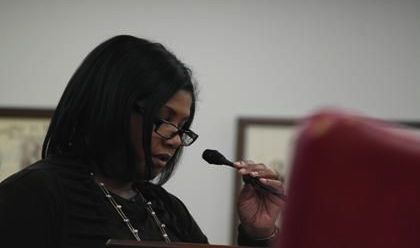 THE PRICE OF SILENCE IS HIGH …

As we predicted she would be, embattled Richland County election director Lillian McBride has been paid off … or at least the deal to purchase her silence is taking shape.

The corrupt public official who oversaw one of the most glaring instances of voter suppression we’ve ever seen is relinquishing her leadership position – which is good.  However McBride will be appointed to another taxpayer-funded job within the election commission – one enabling her to qualify for full benefits from the state’s pension fund.

Convenient, isn’t it? Help a corrupt cadre of elected officials steal over a billion dollars – get set for life.

For those of you unfamiliar with her story, McBride is the puppet election director who oversaw the November 2012 “Richland County Robbery” – which we contend was a rigged election manipulated for the sole purpose of passing a $1.2 billion tax hike.

Two years ago, efforts to pass this tax increase in Richland County failed by just 600 votes – prompting Republican and Democratic state lawmakers to oust a 30-year election veteran and install McBride (who is all sorts of connected to the tax hike movement) as election director.

Frankly the price of McBride’s silence – while high – is nowhere near the price this tax hike will exact from the local economy. And more to the point, neither expense comes close to the cost of lost faith in our democratic institutions that has resulted from this illegal election.

We knew corruption in South Carolina was bad, but when elected officials can conspire to rig elections – and then pay off the people responsible – you know it’s gotten completely out of hand.