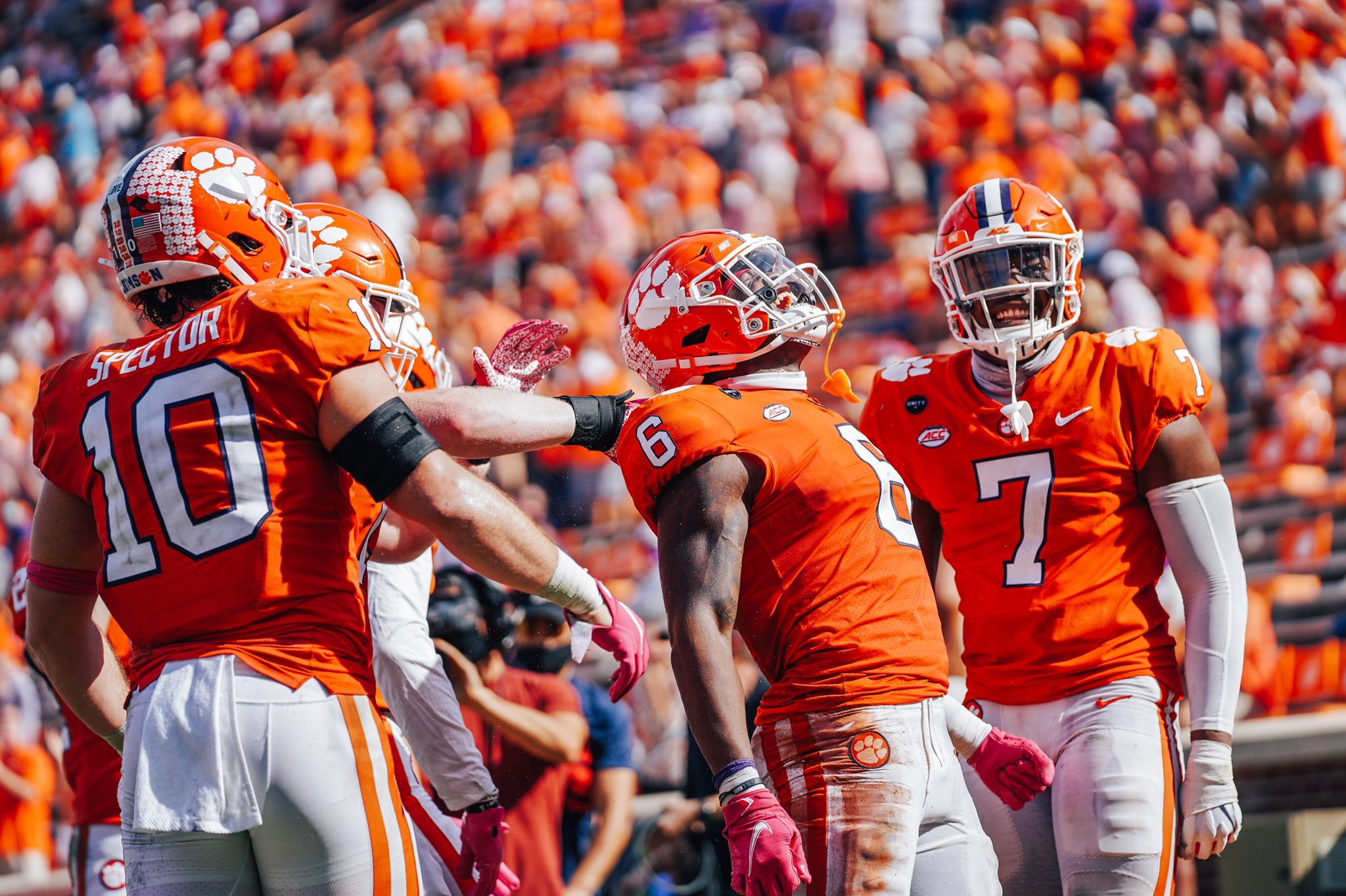 After defeating the Orange for the third consecutive season, extending their ACC winning streak to 27 games and their regular season winning streak to 35 games overall, the Tigers maintained their No. 1 overall status in the Associated Press Top 25 poll – a position they have held since preseason.

This Saturday, Clemson continues its campaign for a sixth straight appearance in the College Football Playoff (CFP) – but first, they’ll have to get past … wait for it … Boston College.

And while it may be Halloween, this reporter’s guess is no one on the Clemson sideline is especially spooked by this matchup.

In what has become a repetitive storyline for Clemson this season, the Tigers are up against a highly outmatched program in the form of the 4-2 (3-2 ACC) Eagles, who enter Death Valley as a 31.5-point underdog, according to Oddshark.

While Boston College’s record doesn’t look bad, don’t get your hopes up for an exciting matchup.

Sure, the Eagles are well on their way to meeting last season’s benchmark of six wins, but will they have the firepower to keep up with the Tigers? Especially considering the opponents listed in Boston College’s current win column have only amassed a 7-19 overall record this season?

No one is expecting BC to compete with No. 1 Clemson after falling to the Hokies and Tar Heels, both of whom are considered to be “upper-tier” ACC schools this season.

But on Saturdays in the fall, anything can happen … which is why they play the game.

Clemson will face Boston College at 12:00 p.m. EDT in a game that will be televised nationally by ABC from Clemson Memorial Stadium in Clemson, South Carolina. Joe Tessitore will handle play-by-play calling, while Greg McElroy will serve as analyst. Holly Rowe will report from the sidelines.

The last time the Tigers and the Eagles tangled, things got out of hand pretty quickly, to say the least. In 2019’s rendition of this annual conference rivalry series, Clemson made quick work of seventh-year head coach Steve Addazio and Boston College, smacking the Eagles, 59-7.

After their blowout loss to the Tigers and losses in three of their five following games, the Eagles decided to take the program in a different direction, firing Addazio and hiring Jeff Hafley, a former co-defensive coordinator with Ohio State who has had stops at Pittsburgh, Rutgers, and the NFL’s Tampa Bay Buccaneers, Cleveland Browns, and San Francisco 49ers along the way.

Haley will be participating in his first battle for the O’Rourke-McFadden Trophy, which was created by the Boston College Gridiron Club to commemorate the rivalry’s tradition. Charlie O’Rourke (Boston College) and Banks McFadden (Clemson) are two football student-athletes from these respective schools that are members of the College Football Hall of Fame.

For the Eagles to beat Clemson (or even come close, for that matter), they will need a lot to go right. Or rather everything to go perfectly.

Boston College’s running game was rancid through its first five contests, only mustering 66.2 yards per game – a measure that is miserable by any means. However, the Eagles turned up their ground game in last weekend’s 48-point explosion against the Ramblin’ Wreck. If they have plan on staying within striking distance of Clemson, they will have to duplicate that performance – and then some.

The Eagles will meet their match in the Tigers’ rush defense, which ranks No. 1 in the Atlantic Coast Conference and No. 19 in the NCAA, allowing only 105.3 yards per game in six contests. To make matters worse, Boston College’s porous offensive line will have its hands full with Clemson’s defensive line. The Eagles are No. 77 in the NCAA in sacks allowed, giving up three per game.

The good news for Boston College is that junior quarterback Phil Jurkovec has been a solid and serviceable quarterback during his first season operating out of “The City on a Hill.”

An additional bonus is that Jurkovec, a Notre Dame transfer, has a solid frame at 6-foot-5, 226 pounds. That could come in handy when the Eagles line up against a Clemson defense that is allowing only 13.5 points per game, a measure that ranks No. 1 in the Atlantic Coast Conference and No. 13 in the NCAA.

The Pittsburgh, Pennsylvania native has recorded 1,671 passing yards and tossed for 12 touchdowns and 4 interceptions – and can grind out required rushing yardage when needed, as proven by his 94-yard output against the Yellow Jackets last weekend.

Jurkovec will have to be multi-dimensional against Clemson’s defense.

When Clemson has the football, everything typically goes through phenom junior quarterback Trevor Lawrence, a 6-foot-6, 220-pound Cartersville, Georgia native who has made himself one of the signature signal callers in the history of the program. Lawrence is having another outstanding season in 2020, amassing 1,833 passing yards, 17 touchdowns, and only two interceptions through six games.

Coupled with tailback Travis Etienne, Lawrence is part of the most potent 1-2 punch in all of college football.

Unfortunately for Swinney, Clemson’s do-it-all quarterback’s tested positive for COVID-19 on October 29 and is officially unavailable for the contest.

How does this development change things for the Tigers?


Clemson will now start true freshman D.J Uiagalelei, a heralded recruit from St. John Bosco high school in Bellflower, California. While performing his duties at St. John’s, he earned the distinction as the No. 1 pro-style quarterback and No. 10 overall prospect, according to 247 Sports.

Uiagalelei has already recorded some playing time this fall, completing 12 of 19 passes for 102 yards in limited action this season.

Looking back over the history of this rivalry, Clemson hasn’t lost to the Eagles since 2010 – and have won 11 of 14 contests against BC since the latter institution joined the ACC in 2005.

Another factor pundits are quick to point out is that Clemson could be looking ahead to its prizefight matchup at No. 3 Notre Dame next Saturday – a game that will likely serve as a preview of the ACC championship at Bank of America Stadium in Charlotte, N.C. on December 19, 2020.

Following the Boston College game – a contest that Clemson should easily be able to manage without Lawrence – his availability against the Irish is very much up in the air.

Testing positive just nine days before the contest in South Bend it would certainly seem the leading candidate for the Heisman Trophy is questionable for next weekend’s all-important matchup – something this reporter will definitely be keeping tabs on headed into next week.

In the unlikely event this weekend’s game remains close in the third quarter, count on the Tigers’ defense to close the Eagles the same way closed out Syracuse.

Just recall sophomore cornerback Andrew Booth’s 21-yard “Scoop-N-Score” fumble recovery that allowed Clemson to pull ahead from a measly 27-21 lead in with just 1:26 remaining in the third quarter to put the upset-minded Orange away.

On top of that, the Tigers’ defense had three interceptions in their triumph over the Orange. That’s one reason for Clemson’s +1.17 turnover margin, a measure that ranks No. 11 in the nation.