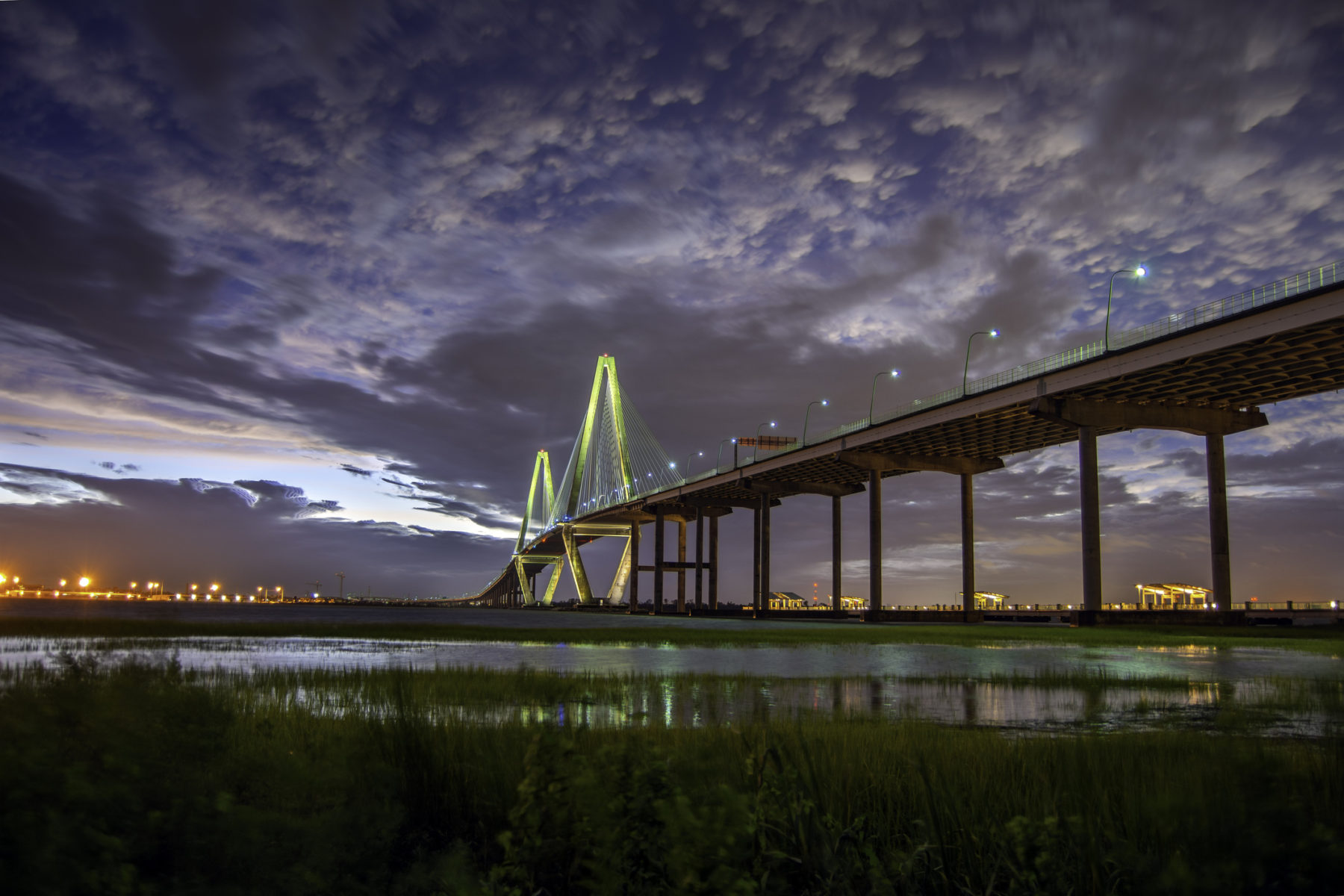 Well, Bravo TV’s Southern Charm is back with potentially a new and improved cast, but if you were looking for an escape from 2020 daily life … this might not be the show for you anymore.

The seventh season of the series begins with the familiar opening “ba ba doo” music and a scene of the iconic Ravenel Bridge with sailboats in Charleston harbor below. But then it cuts to … boarded up shops, empty streets and talk of viral exposure which sounds something like a scene out of the movie Contagion.

But like seasons past, Bravo is teasing what’s to come before it dives headfirst into the big bowl of dysfunction.

There are glimpses of Zoom calls about who is “positive” and irresponsible behavior whilst infection numbers are still on the rise. In a flashback to six months prior, Charleston is buzzing with tourists, the music is bouncy and the sun is shining.

Craig Conover appears in just his pajama bottoms (seemingly courtesy of Miss Patricia Altschul) with the face of his dog, Bethany (named for the Delaware beach town perhaps?) sprinkled about. The cheese plate and bottles of wine from the night before have been left out in the living room, and the camera takes us up the stairs. Toothbrush firmly in mouth, Craig opens the blinds to awaken the person snuggled in bed. Out pops Austen Kroll from under the duvet, which caught me by surprise.

Sleepover party? Lifestyle change? What y’all get up to after closing time is none of my business …


Next we finally get to meet Madison LeCroy’s son, Hudson, who is cute as a button being driven to school with his sunglasses perched on top of his head. Next stop is the Thomas Ravenel rental, where we get to see Saint and Kensie. Recently there have been several headlines stating that Ravenel and his erstwhile girlfriend/ co-star Kathryn Dennis were living together … but they are not. PC or pre-covid, Dennis and the kids were simply staying at Ravenel’s while the townhouse Kathryn inherited after her mother’s passing was being renovated.

The children seem happy and bouncy (like Tigger from Winnie the Pooh) as they have breakfast.

Shep Rose is at home with Little Craig the dog, who is as cute as ever (the dog, not the guy). Little Craig has the morning zoomies and seems to be disappointed as daddy Rose closes him out of the bathroom during shower time. Patricia’s doggie dress up box puts my daughter’s to shame, with a variety of hats and tutus (though I didn’t spot any princess dresses).

Austen and Craig are doing some laundry, with Austen wearing a lavender chenille robe (which I’m guessing belongs to Madison or perhaps his mom). I used to have a similar one in light blue with the sun, moon and stars appliquéd on it. I think a corgi chewed it up.

It’s a scene out of The Odd Couple, with Austen sharing laundry tips from his mom.

(Via: Sewing Down South)

Wait … am I on the right channel? Or did I stumble into a commercial break on HGTV? It is Thursday night, right? Right?

Craig proceeds to share that his beautifully decorated house sprang a leak and is now undergoing asbestos abatement, the long and short of which is that he is presently bunking with Austen. Mystery solved. Maybe.

Conover shares that his company – Sewing Down South – is doing very well, and he even went on tour to do pillow party meet and greets. Ah, remember the good old days of cocktail parties – dipping crudite into the same bowl as many others before you? Good times!

Austen shares an up-to-the-minute relationship update, stating that after some “off” time, he and Madison are back “on.”

Well, for now (much to the dismay of new roomie Craig and Shep). Prepare for some serious whiplash on this front.

Back to the Ravenel abode which is captioned “Kathryn’s temporary house.” She states that custody is finally settled (which it was then), but fast-forwarding to real-time we know that once again, it isn’t. Thomas is moving more than two hours away – and wants to take the children with him. After last season – when the kids weren’t allowed to be on camera – it’s interesting that when he pops back up, all of the sudden it isn’t so damaging for Kensie and Saint to film again.

Down the stairs bounds the man in the tight white pants avec moose knuckle (can’t they blur that out, as some of us prefer our deli meat sliced?), dressed for polo as he was allowed back on the team after that pesky assault legal matter sidelined him. Just to zone in on exactly what was happening in real life, nobody but perhaps Thomas and/ or baby mama number two knew at the time that another baby Ravenel was on the way.

So I guess this was chapter 22 of “Let’s Play Happy Families Just Before Dad Stakes Another Claim?”

The children share what they are learning in school while chowing down on some delicious p.b. & j.

At the moment, it seems like smooth sailing, but Southern Charm fans know storm clouds are always in the forecast. Saint is wearing a lovely shade of grape jelly while talking about the solar system.

Thomas states that it “takes two to raise kids.”

Next we head back to Madison’s house, where she and Hudson have a morning routine which is far smoother than ever took place in my house, and with far less cursing.

The next scene features Shep popping into Patricia’s to invite her to his party, and for a happy hour tipple as butler Michael Kelcourse is mixing up some bourbon sours (which sound like a possible albeit temporary cure for 2020).

Shep shares with Patricia that he has had some zen injected into his life thanks to a therapist and Taylor Ann Green, a woman he is calling his girlfriend. Will the island of the lost boys soon have a vacancy?

Shep’s “come to Jesus” moment has made him realize that he doesn’t want to be beefing with anyone. Time will tell, but he does look happier than he did last season – in which he seemed to be heading into angry middle-aged man territory. We can all insert flashbacks from last year of hormonally imbalanced Shep – who seemed to have an ever-expanding list of all the people he wanted to piss off or humiliate.

Has the slate been wiped clean? Only time and Twitter will tell.

Shep is now in his car, calling Craig, who says that he is heading out to meet Kathryn for lunch, where she will share – on camera – a rumor she heard involving ex-cast member Cameran Eubanks and her husband.

Have I heard the same rumor from other Charleston sources, including one who does regular business with at least two other Charmers? Yes. Would I have repeated it on camera? No, but there is obviously still some bad blood still there.

If I had to guess, I’d say production was in on this, perhaps upset that Cameran didn’t return. Again, just a guess … but the timing sure seems curious.

The most relaxing scene of the night had to be Little Craig getting a bath in preparation for the party, but can someone move Taylor’s mic from out of her bum crack?

On another topic, is it just me or do all of the boys seem more domesticated this season? Craig doing laundry, Shep picking up the dry cleaning, and Austen steaming his shirt for the party?

If Whitney Sudler-Smith was their piping macaron, my mind would totally be blown.

Finally, we get to see everyone – old and new friends – assembled at Shep’s Dumb and Dumber themed party. Patricia and Whitney show, followed by Madison Simon, Danni Baird and Kathryn.

New cast member John Pringle makes an entrance, and Miss Pat makes sure that Madison meets John, as she thinks he would be a step up from Austen, whom she refers to as “a child.”

Well, look out Mr. Pringle, because the single ladies are circling!

Is Madison really telling Craig she doesn’t love Austen? Are we supposed to believe that Danni didn’t know that John C. Calhoun, Kathryn’s descendant was a slave owner two hundred years ago?

Who knows! See you next week …

Taylor Swift Has A Girlfriend?