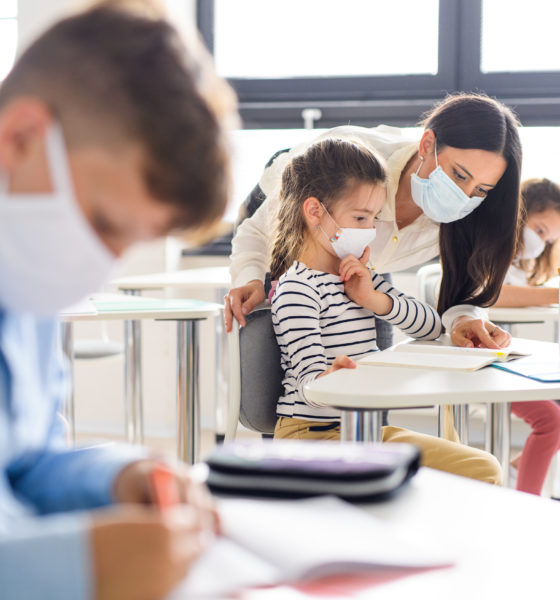 “By not providing face-to-face instruction RCSD1 is violating federal law and willingly expanding the education and achievement gap of our students.”

Parents of students in Richland County School District One are rallying together against the district’s reopening plan, which does not offer any face-to-face learning at the beginning of the school year in the COVID-19 pandemic.

The group has written a petition to the school board, South Carolina Superintendent Molly Spearman, Gov. Henry McMaster and the Richland County legislative delegation.

As of Wednesday morning, more than 350 parents have signed the petition.

Last week, Richland One administrators submitted a plan to the South Carolina Board of Education (SCDE). It offers parents two choices but begins with virtual learning (shown below). The plan has not been approved by SCDE.

The first option offers a phase-in program that starts the school year with all students learning virtually as Richland County is in the “high risk” category for COVID-19 with more than 20 percent of tests resulting in positive cases. The other options allows parents to enroll in an all-year virtual learning program.

When the spread of COVID-19 (hopefully) slows down and Richland County moves into the “medium risk” category — with between 5.5 and 9.9 percent positive tests — the district would move to a hybrid model where younger students go back to the classroom a few days a week.

As of July 27, Richland County had a 24.7 percent positive rate.

Hundreds of parents in the district oppose the plan — saying that it doesn’t meet the needs of all students, especially students in impoverished and working class homes, and students with special needs. About 72 percent of Richland One students qualify for free or reduced lunch.

The parents say Richland One’s plan is “seriously deficient in many important ways.”


In the petition, Richland One parents said they recognize that public schools “provide essential resources to our most vulnerable students.”

“Every student deserves an educational environment that is organized, structured, and safe,” the petition said. “For most students the virtual model is an unsuitable substitute for in-person learning that denies students and teachers the opportunity to directly interact and achieve a viable, long-term, educational experience.”

Richland One parents are also concerned that “approximately 20% of Richland County residents do not have access to broadband internet.

“Based on FCC data, it is unclear whether CARES Act funded hotspots will actually offer an adequate cellular internet signal in areas of need,” the petition said.

Richland One parents also said there were many obvious flaws in Richland One’s e-learning platform last year and that virtual learning deepened the class divide between students.

“The deficiencies are so great that they cannot come close to being overcome except by those few parents who have the financial resources to invest thousands of dollars to create a suitable learning space for their child (while still paying taxes to keep the public schools fully funded),” the petition said. “This is especially true for families of special needs students (learning disorders, ADHD, Special Ed., non-English speaking households, etc.).”

The letter claims that Richland One’s plan violates the No Child Left Behind Act of 2001, which aims to “close the achievement gap between high- and low-performing children, especially the achievement gaps between minority and nonminority students, and between disadvantaged children and their more advantaged peers.”

“By not providing face-to-face instruction RCSD1 is violating federal law and willingly expanding the education and achievement gap of our students,” the petition said.

The petition lists 12 reasons for state officials to re-consider before approving the plan — beginning with the fact that the board of commissioners did not approve it, which could be considered a violation of FOIA laws.

As FITSNews previously reported, the reopening plan was not voted for approval by the Richland County School Board of Commissioners at last week’s board meeting. Richland County administrators appeared to decide on the plan without the approval of the board.

Commissioner Jonathan Milling made a motion in last week’s meeting to have the board vote on the plan as S.C. code 59-19-90 requires school boards to “manage and control local educational interests of its district, with the exclusive authority to operate or not to operate any public school or schools.”

Commissioner Cheryl Harris and Chairman Jamie Devine objected to Milling’s motion, citing “exigent circumstances” allowing for the plan to be submitted to Spearman without the board’s vote.

Milling argued that the reopening plan shouldn’t be considered an exigent circumstance or an emergency, as FOIA requires, because this decision was a long time coming. As cases have surged this summer in South Carolina, officials have known for months that the pandemic wasn’t going away and they would have to decide on reopening schools in the fall.

Milling’s motion died for a lack of a second, however. Commissioner Beatrice King raised issue with the fact that the board was not voting on the plan at the beginning of the meeting, but she was not present when Milling made the motion. King had to leave the meeting early due to the death of a friend.

RELATED: Richland One Chairman: On Social Justice: Some Will Get ‘Caught In The Crossfire’

In the petition, parents also argued that because 44 percent of parents surveyed chose year-long virtual learning as their first choice, it should be easier to safely follow CDC guidelines for social distancing with smaller classrooms.

The petition also said two thirds (1,730) of Richland One staff members chose face-to-face or hybrid learning as their first choice.

On the flip side, teachers from districts across the state protested in Columbia this week advocating to begin the district virtually until the COVID-19 pandemic improves in South Carolina,WSOCTV reported.

On Monday, Spearman’s office announced the approval of six district’s reopening plans — all of which include a face-to-face option at the beginning of the year.

Last week, Spearman told ABC News 4 that reopening plans must include face-to-face learning at the beginning of the year.

“That is a requirement of reopening plans – that every student be invited to come in at least one day a week. Now, it could be that some families choose not to do that. It will not count against the student,” Spearman said.

WIS News 10 reported Tuesday that SCDE is requiring that school districts’ plans must include a face-to-face option for at least one day a week for all students, even at the beginning of the year when infection rates are still high.

In total, 73 school districts have submitted reopening plans to Spearman, while eight districts were given deadline extensions.

Earlier in July Gov. Henry McMaster asked that South Carolina school districts give parents an option to choose between in-person, five-day schooling or continue virtual learning for their children this fall — and he strongly encouraged in-person learning.

“There is nothing more important we can do than educate the children of South Carolina,” McMaster said, stressing that virtual learning isn’t stacking up to in-classroom education. “We must take every step at our disposal to get teachers and students back in the classroom.”

S.C. public schools have been closed since March 16, when there were only 26 confirmed COVID-19 cases in the state.

Richland One recently voted to move the student start date to Aug. 31. Parents in the district must decide whether or not to enroll their students in the e-learning program by July 31.

Vincent Sheheen Did The Right Thing On Santee Cooper Recusal