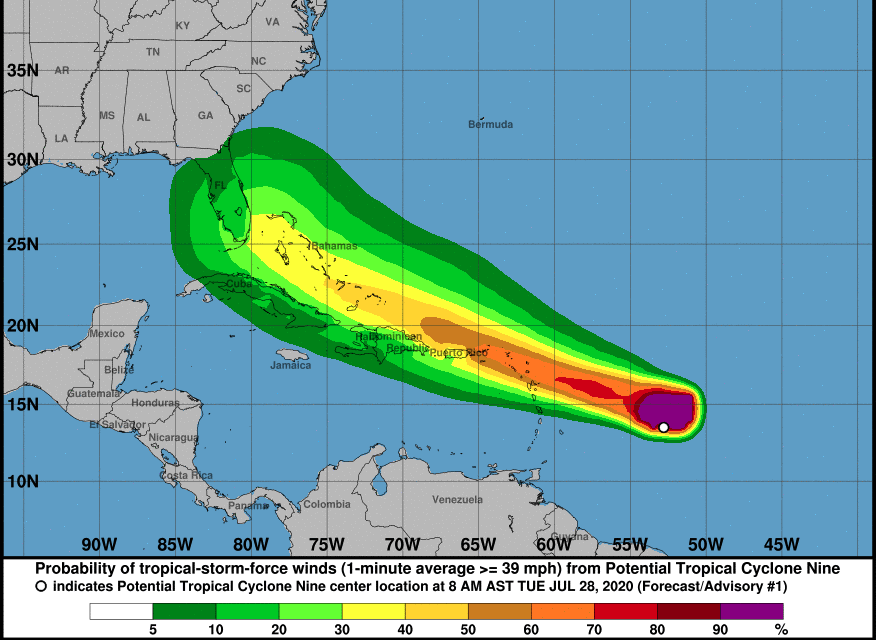 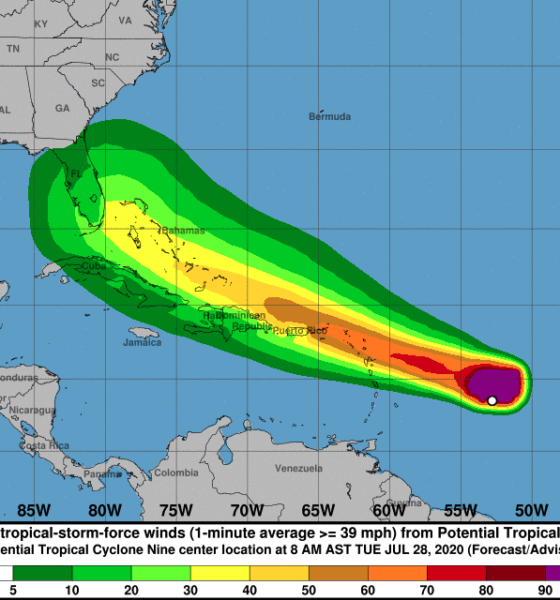 We’re keeping a close eye on this one…

After Hurricane Hanna  and Tropical Storm Gonzalo quickly deteriorated, meteorologists are now focused on a tropical wave called Invest 92L — now Potential Tropical Cyclone 9 — which has increasing potential of impacting the southeast coast in the next week.

On Tuesday morning, the potential cyclone was churning in the middle of the Atlantic about 400 miles east of the Windward Islands after gaining strength overnight. It has 40 mph maximum sustained winds and is moving at about 23 mph, according to the NHC.

A tropical storm warning is in effect for Puerto Rico, including Vieques, and Culebra, the British Virgin Islands, and the U.S. Virgin Islands.

In its 11 a.m. update, the NHC released its first cone for the potential tropical storm.

The NHC’s model tracks the storm moving west-northwestward over the next few days, but not gaining enough strength to reach hurricane levels.

NHC experts predict the center of the storm will be somewhere around the southeast Florida coast by 8 a.m. Sunday.

However, because we’re so far off, the size, strength, and track of this storm could very greatly in the next few days.

“It’s possible this system will have to battle unfavorable upper-level winds and/or dry air along its track to near the Bahamas,” the Weather Channel reported. “That could hinder its ability to intensify, however, that forecast factor is not yet certain.”

Here’s a look at the latest spaghetti models, mostly tracking the storm off the South Carolina coast, or fizzling out before leaving Florida waters.

Again, it would be likely next week before South Carolina would see any impact, if any, from the storm.

South Carolina is still outside of the NHC’s “cone of uncertainty.” Here’s a look at the earliest arrival for tropical storm winds from the system..

The storm would be named Isaias.

While it’s very rare (actually unheard of) to have 9 named storms by late July, this is the time of the year when activity in the tropics tends to increase. The earliest “I”storm previously was Irene on Aug. 8 2007.

We should probably get used to the name Isaias, as more and more models favor its formation this week.

Several meteorologists are pointing out the size of Invest 92L. We will know a lot more about the system after the Hurricane Hunter aircraft visits this afternoon.