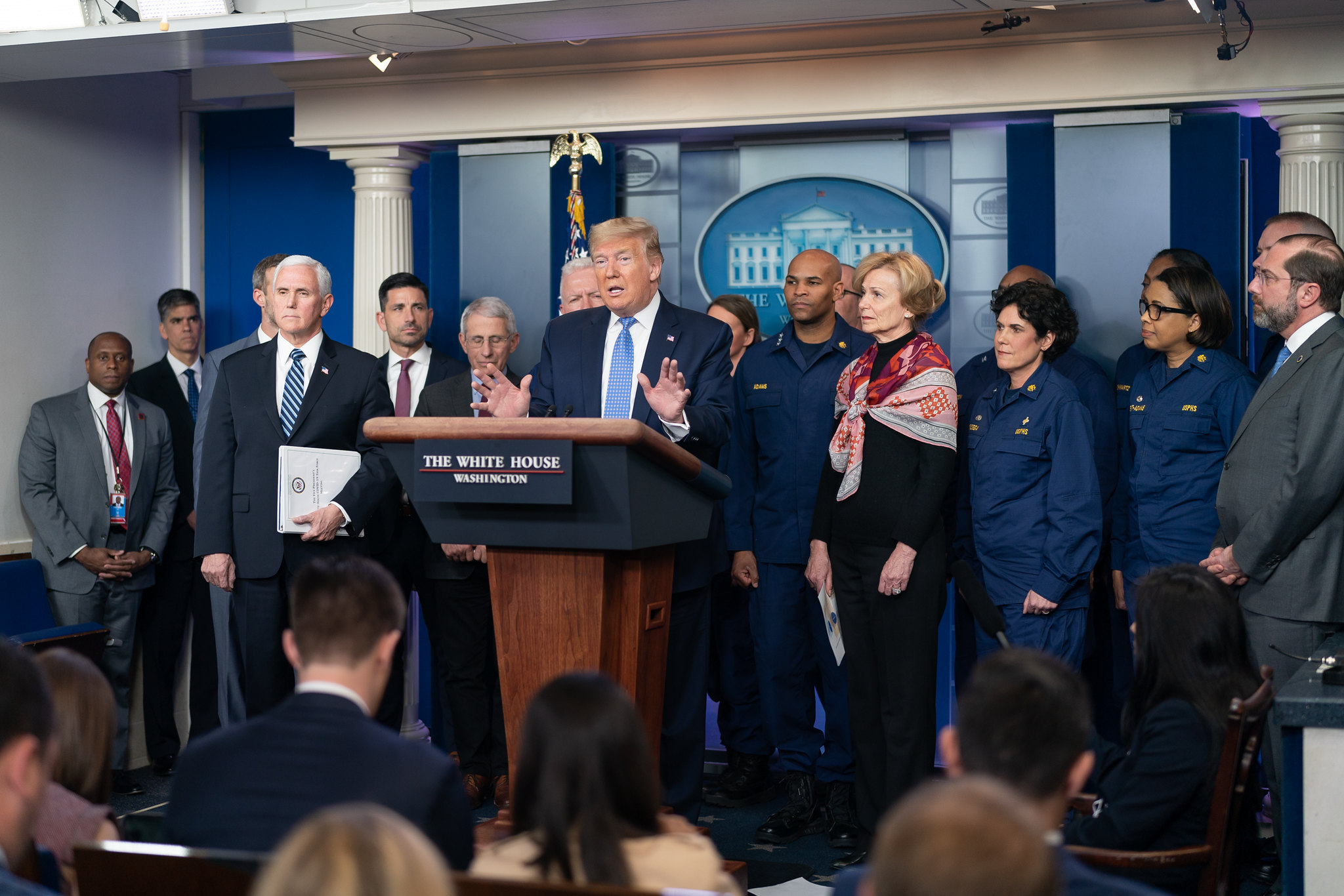 by ROBERT ROMANO || President Donald Trump praised the Federal Reserve for cutting the federal funds rate to a range of 0 percent to 0.25 percent, and restarting quantitative easing with $500 billion of U.S. treasuries purchases and $200 billion of mortgage purchases in response to the Chinese coronavirus global pandemic.

“It makes me very happy and I want to congratulate the Federal Reserve,” he said. “That’s a big step and I’m very happy they did it.” Trump has been hounding the Fed for years to cut interest rates to make the dollar more competitive against trading partners’ currencies including the yuan, euro and peso. Now he gets his wish.

The move came a day after the President threatened to fire Fed Chairman Jay Powell, when he said, “I have the right … to remove him as chairman… I have the right to also take him and put him in a regular position and put somebody else in charge.  And I haven’t made any decisions on that.”

The Fed noted in its release the strength of the U.S. economy when the coronavirus struck: “Available economic data show that the U.S. economy came into this challenging period on a strong footing,” with a 50-year low of unemployment at 3.5 percent, but forecast “[t]he effects of the coronavirus will weigh on economic activity in the near term and pose risks to the economic outlook.”

Finally, the Fed said it would keep rates low until it was certain the economy gets past the worst of the virus: “The Committee expects to maintain this target range until it is confident that the economy has weathered recent events…”

That came as the President declared a national emergency on March 13 in response to the coronavirus and the House quickly passed legislation providing for paid sick leave and an expansion of unemployment benefits, foreshadowing an expected economic slowdown and uptick in unemployment as thousands of schools and businesses shut down to flatten the rate of infection from the virus that originated in Wuhan, China late last year.

Millions of Americans, especially older Americans, will be weathering the outbreak inside, only venturing out for groceries and largely working from home. Massive stockpiling of food and medicine is already occurring nationwide. Expect an uptick in retail spending in the first quarter of 2020. Any such spending surge, however, will surely be offset by slowdowns elsewhere by affected industries across the country.

Trump has already taken advantage of record low oil prices by stockpiling the strategic petroleum reserve, promising to support U.S. producers. And now there is a controversial push in Congress to bail out the airline, tourism and hospitality industries. The Trump administration is already making loans available to small businesses on an emergency basis.

Finally, President Trump is pushing for a payroll tax holiday to shore up cash flow issues almost every household in America could be facing if we get a situation akin to Italy.

These are all big government policies that have not been seen since the financial crisis and recession of 2007-09, and probably won’t be the full extent of it when all is said and done, highlighting the negative economic impacts that are widely expected from the sudden, dramatic change of behavior of millions of Americans to stay put and not participate in the economy.

The difference between a decade ago and now is that the policies in 2008 appeared to be reactive and long after the devastating effects of the financial crisis were already being felt for months.

Here, the policies look preemptive and aimed at anticipating downstream fallout from the virus. That is surely refreshing to the American people, even as it expands the government’s mandate.

The trick will be to make certain the measures are indeed temporary and are allowed to expire at the end of the year, especially since they incentivize temporary unemployment in a bid to slow down the virus. When this is all over, everyone needs to get back to work.

Hopefully, the measures are overkill and the effect of the virus will be mitigated by the aggressive actions now being taken to save lives, thereby limiting the long-term damage felt by the nation. It will certainly blow a massive hole in the deficit, the question is how big. The less impact from the coronavirus in terms of cases, then perhaps the less costly these Congressional measures will become to taxpayers. As it is, the legislation faces an uncertain fate in the Senate.

Lots of schools in the north have a lot of snow days saved up – it was a warmer winter in many states – and so it is possible that the virus may be no more disruptive than a month of bad snow. We’ll see.

In the near term, the effects to the outlook are predictable. Interest rates will continue to collapse or remain low in a flight to safety, thereby reducing the federal deficit and saving taxpayers tens of billions of dollars, partially offsetting the costs of Congressional actions.

Commodities may eventually respond to the weaker dollar and the presidential action to shore up U.S. oil producers.

Equities will struggle until they find a bottom in the midst of the continued uncertainty. When that comes, weeks or months from now, it will be the buying opportunity of the decade for investors, with the potential for massive capital gains in subsequent quarters.

Over the next month, as drive-thru testing becomes more widely available via the public-private partnerships being undertaken by the Trump administration, a lot will be learned about the extent of the virus’ spread. Expect a jump in new cases and more turmoil so long as the number of new cases rises.

But eventually, the number of new cases whether owing to a flattening of the curve or warmer weather will drop, and that could catalyze a massive bounce both on markets as well as economically as millions of Americans are able to begin participating in the labor force again.

The U.S. economy is the largest in the world, and thanks to the success of the past three years of cutting taxes, regulations and crafting better trade deals, and with your own efforts to mitigate the risk of the virus by following CDC guidelines, we will all weather this storm together.

South Carolina Senate To Amend Its Schedule In Response To Coronavirus