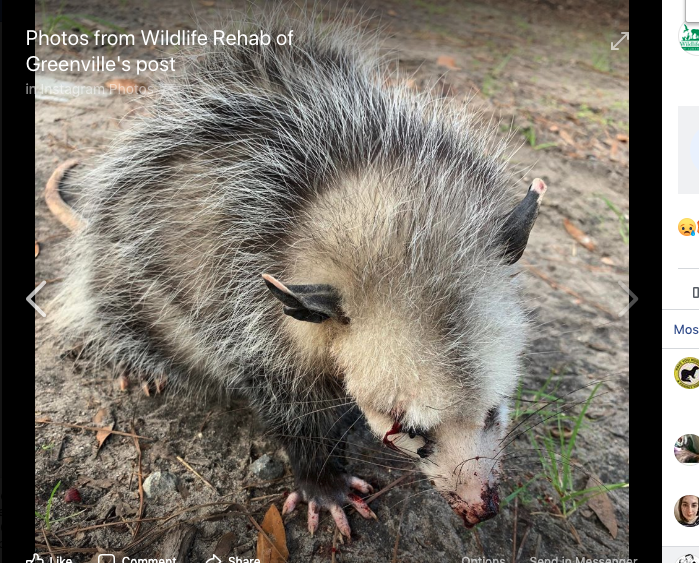 Earlier this week, a viral story about an injured Hilton Head Island opossum sparked outrage in South Carolina and prompted hundreds of people to donate over $10,000 to the Wildlife Rehab of Greenville (WRG) — the organization that first posted about the allegedly abused animal.

After a thorough investigation, officials at the South Carolina Department of Natural Resources (SCDNR) did not find any evidence that the opossum was beaten by anyone. Nor did they find any evidence to back the claim that a group of golfers had anything to do with this.

A veterinarian who examined the animal’s injuries was not able to determine how the female opossum named Scarlett got its injuries, according to a Wednesday statement from SCDNR.

The WRG —the organization who sparked public outrage by posting the baseless accusations that claimed a group of Hilton Head golfers ruthlessly beat a 2-pound wild animal — has made nearly $15,000 in donations since the story went viral.

The opossum has been treated by a wildlife caretaker on Hilton Head since she was found injured on Jan. 7, David Lucas, spokesperson at SCDNR, told FITSNews Wednesday. She’s been with that caretaker in Beaufort County the entire time.

Lucas said the volunteer was affiliated with the Greenville organization.

Wednesday evening, officials from the WRG posted a lengthy statement on Facebook stating they stick by their claim that Scarlett was “attacked by humans” based on photos of her injuries. However, they apologized for “not having all the facts onset” and said they were “misled” by initial reports made by their volunteer.

In its Wednesday evening statement, the WRG said the unnamed volunteer claimed she was getting death threats” and has left the organization after the story went viral.

The Greenville organization first shared Scarlett’s story to Facebook on Jan. 8 with photos of the mangled opossum.

“Some golfers beat her with their clubs,” the post said. “She has a broken jaw and is now blind. If she can recover, she will be an ambassador for opossums every where. She’s only 2 pounds and still has baby teeth. It’s hard to imagine why she was attacked so viciously.”

The post asked for donations to “help (them) help her and the other (animals that come into their care)”.

That post alone was shared 8,000 times and generated more than $9,400 in donations on Facebook. It is not known how much they raised through their website portal.

In the last week, the WRG posted several other times with photos and updates of Scarlett over the next few days, which generated more than $5,000 in additional donations.

Wildlife rehab officials told several news outlets including WTOC and CNN that there were witnesses who saw the attack and that the opossum’s injuries were “indicative” of being struck by a golf club.”

However, SCDNR officials have not found any witnesses in their investigation.

“We are not entirely certain how that idea got started,” Lucas said.

In their Wednesday statement, WRG officials blamed the unnamed Beaufort County rehabber who has been taking care of Scarlett for this rumor.

“When she contacted our director, Wendy Watson, she made several statements regarding witnesses to the incident, location of the attack and public aid responders,” the Facebook post said.

“One person led to all this confusion. We trusted the wrong source and we apologize for that,” the WRG Facebook post said.

‘We are trying to deal in facts’

For several days following the incident, WRG officials stuck with the narrative that it was absolutely fact that the baby animal, found on a road 300 feet away from a golf course, was beaten by Hilton Head golfers.

“DNR reports that she may not have been attacked at the course itself, but on a road that runs along the course,” another WRG post said. “This explains why we have been reluctant to release the name of the course. We are trying to deal in facts. We don’t know if the person or people who attacked Scarlett were paying members of the golf course, if they were just walking along or even if they were tourists and have since left the area. We can tell from her wounds that she was beaten with a golf club.”

However, Hilton Head-area wildlife volunteers say they tried to stop this narrative. Laura Sterling, owner of Laura’s Little Critter Barn, said on Facebook that the volunteer working with Scarlett had a problem with the “inflammatory story,” WRG posted and asked them take the post down.

“The fact is the day after Wildlife Rehab of Greenville posted the unverified highly inflammatory story about Scarlett the baby opossum, the volunteer rehabber went to Greenville and informed them the story was not verified and she couldn’t verify it and it was tearing our community apart and hurting us publicly and please stop it and take it down,” Sterling wrote in a Facebook post.

Sterling wrote on Facebook that Watson refused to take the post down, and continued to create more fundraising posts for the Greenville organization. WRG officials deny this claim.

According to Sterling, as of Tuesday the director had not paid Scarlett’s veterinarian bill. However, Sterling updated the post Wednesday afternoon and said she just learned the Greenville center called the Hilton Head vet and paid the bill.

NOTE: FITSNews attempted to contact WRB officials through multiple phone calls and a Facebook message and never heard back.

While the SCDNR investigation is still ongoing, the Internet may never know what happened to Scarlett the opossum.  Even if Scarlett was beaten, investigators don’t have any sort of a timeline to narrow down when it happened.

“We don’t know how long the animal was there before the Good Samaritan who called us in found it,” Lucas said.

“You need to stop lying to people. You guys made this whole story up and are making my hometown look horrible,” one commenter said.

“This is fraud, folks,” said another.

Sterling said on Facebook the fact that animal rehab organizations are underfunded and have to seek help sometimes from groups such as the WRG and that is the “key factor in this story that allowed this to happen.”

On the bright side, the opossum is recovering.

“Scarlett, no matter what caused her injuries, is doing great and will hopefully recover and live a life of teaching the value of our wildlife,” Sterling wrote.

WRG said in its statement Wednesday evening that the volunteer who took Scarlett has cut off communication with them.

“The last thing WRG heard about Scarlett’s location was that she was still with the rehabber who took her in and is no longer returning our attempts to communicate,” the post said…” WRG has made repeated demands for her return to our care since we’ve been raising funds for her.”

WRG officials said in their post that if anyone who donated feels they were misled, they are “more than happy” to refund the money.

WRG’s statement did not specify what exactly the organization plans to do with the money now that Scarlett is no longer in their care.