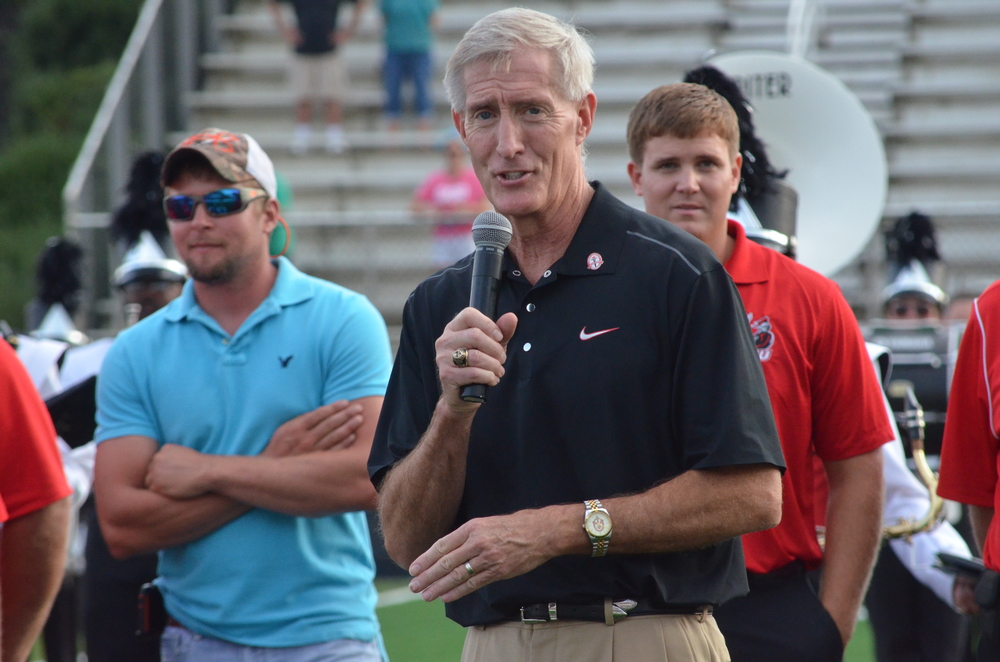 A little over four years ago, this news outlet reported on allegations against Jimmy Epting, the former president of North Greenville University (NGU) – a staunchly social conservative Southern Baptist school in Tigerville, S.C.

To be clear: We did not make the allegations against Epting, we were simply among the many news outlets reporting on them at the time.

Who did make the allegations? Epting’s own family members …

Specifically, Epting’s son Paul Epting – who filmed his father at a lake house with a female colleague.

“I know exactly what you’re doing,” Paul Epting told his father in a since-deleted YouTube video. “It’s over Dad, this is done. I have you on video. It’s done.”

The video in question was shown to the NGU board in October 2014, but no action was taken. In January of 2015, however, Epting announced he was taking a sabbatical for the spring 2015 semester – and he retired from the school in June of that year.

This week, our news outlet received a copy of Epting’s new paperback book I Know You Can’t, But I Can!!! Affixed to the front cover of the book was a post-it note.

“(Four) years ago you made allegations against Dr. Epting,” it read. “It is time for a rebuttal on your part. Print the truth!!”

In his book, Epting rejects the affair allegations and rebukes his critics in no uncertain terms.

According to him, the drama leading up to the infamous video began in 2013 and early 2014 when he and three vice presidents at the school began to work together closely “concerning the development of a new undergraduate online program and the strengthening of our graduate online program.”

“We traveled a lot together as we reviewed the programs at other schools,” Epting recalled, adding that “the administration (also) spent a lot of time together with strategic planning for the programs.”

By mid-2014, Epting claimed “tension and conflict brewing within my own family erupted and crossed over into my work.”

Specifically, he wrote that “it was at this time that my daughter and her husband falsely accused me of having a sexual affair.”

“In their efforts to prove that I was having an affair, they trespassed (unlawful entry) into our home and stole my iPad, hacked into my cell phone for texts and emails, had a trail camera set up at my other house (our primary home was a university-owned and provided house) and worked it out to have a GPS locater placed on my vehicle,” Epting claimed.

On October 30, 2014, I had planned to spend a couple hours at my house to work on my boat. The employee in question needed to discussing the upcoming online program board meeting in California with me before she and her husband left the next day to travel to the meeting. Since ours was not a planned meeting that day, I asked her and she verified that her husband knew about it. We worked the entire 30-minute trip to the house. Once there, I worked on the boat dock while she sat on the porch and worked. When I finished, we stepped into the house so she could use the bathroom and I could get something to drink.

“That is when I heard someone come up the stairs from the basement and became concerned that an intruder had broken into the house,” Epting continued. “When I went to confront the intruder, it turned out to be my son, Paul, who, as part of his effort to figure out the truth of his sister’s accusations, was video recording what he found.”

Epting said he was “clearly surprised” in the video and that his female colleague was “terrified.”

“We had not been in the house for more than five minutes and, as the video showed, we were fully dressed and were not acting inappropriately,” Epting continued. “The video shows my innocence of the accusations rather than any guilt.”

Epting was later accused – and ultimately cleared – of sexual harassment allegations involving the employee in question, who purportedly told him in January 2015 that she made the allegations in part to “save (her) job.”

Epting also accused his former female colleague of working with an attorney “to convince people that she had done no wrong and I was to blame for everything.”

“There was no affair, no harassment, and no school policy violations,” Epting wrote. “However, we had allowed our working relationship to develop into a strong friendship that created a perception of preferential treatment. It would be farcical for anyone to believe that this was one-sided, or that this employee was not at least an equal partner in the friendship. And after working together for more than twenty years, any other person working with us would have to admit that we had each contributed to any perception of preferential treatment.”

As for the coverage of the video, Epting accused the media of spreading “fake news or shady news as a smear tactic.”

“The media reporting quickly became noise rather than news,” Epting wrote. “I also realized that the media was actually less interested in me, personally, and more interested in using the allegations to undermine the reputation of North Greenville University and the work of Christ through His school. I came to see the larger spiritual battles and warfare that were going on behind the twist(s) and turns of my own story.”

Another part of Epting’s story? NGU’s decision earlier this year to pay $2.5 million to settle a lawsuit alleging that the school had entered into a “covert agreement” with a now-defunct student recruitment firm to provide “incentive-based compensation” for each student it was able to convince to enroll at the school.

This alleged scam was initiated “to boost enrollment and line the pockets” of Epting and Keli Sewell, NGU’s vice president of enrollment management.

Sewell remains employed at NGU, incidentally. In fact, she appeared in an interview earlier this month on WYFF TV-4 (NBC – Greenville/ Spartanburg, S.C.) touting the school.

Meanwhile, U.S. attorney Sherri Lydon of South Carolina said the settlement “should serve as a warning to institutions that would attempt to maximize enrollments to line their own pockets, disregarding the best interests of students in the process.”

Our view on all of this? Frankly, we think Epting doth protest too much … and we believe his decision to take a sabbatical (and then step down from his post) speaks volumes. If he indeed did nothing wrong, why resign?

Having said that, whatever happened between him and his alleged paramour is certainly not for us to judge …