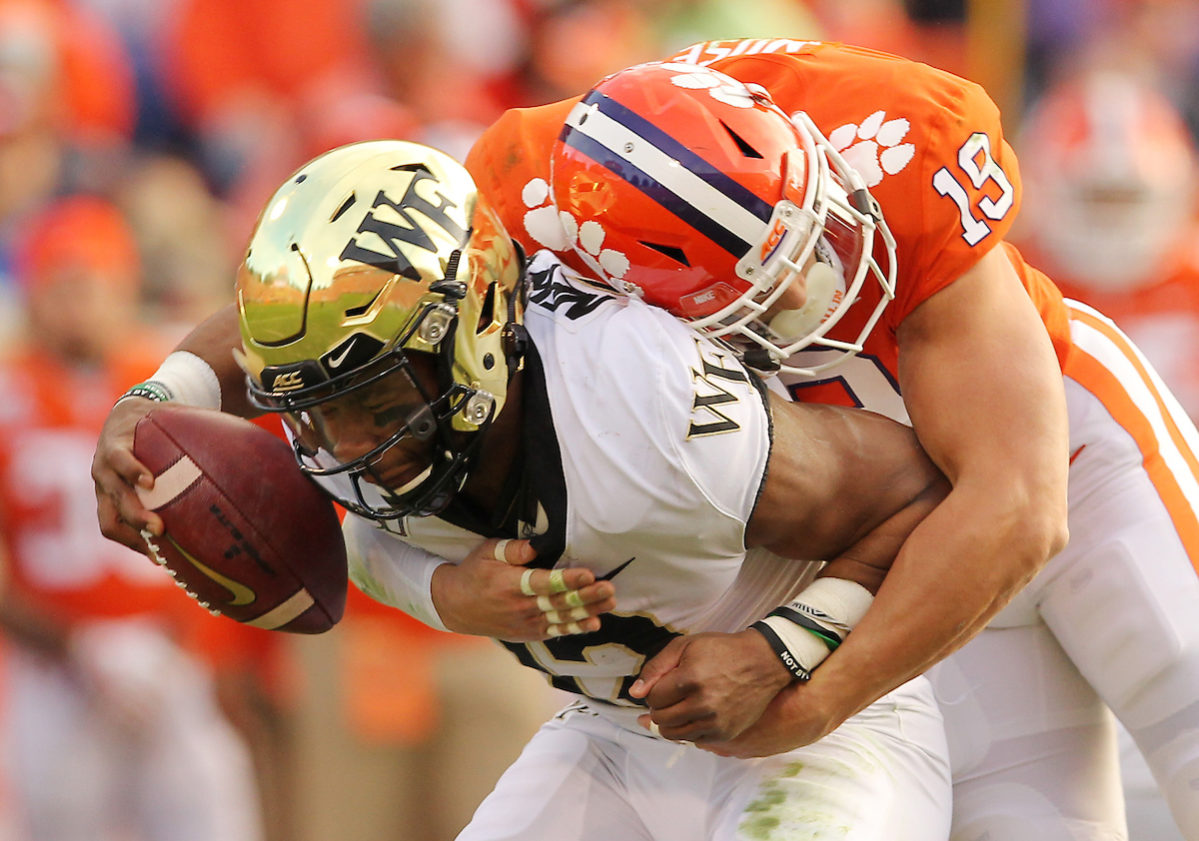 Ever since they let their No. 1 national ranking slip away, the defending national champion Clemson Tigers have heard the refrain of their critics: “Overrated,” not as good as last year’s squad and winning in a weak Atlantic Coast Conference (ACC).

And for a moment there earlier in the season, the critics may have had a point …

Third-ranked Clemson eviscerated Wake Forest 52-3 on Saturday afternoon in its final home game of the season at Death Valley, serving notice that the Tigers (11-0, 8-0 ACC) not only belong in their fifth consecutive College Football Playoff (CFP) – but may be the team to beat.

But to anyone who thinks these Tigers are beating cupcakes and unable to hang against the premier programs in America (i.e. the Southeastern Conference) … how quickly they forget the curb-stomping head coach Dabo Swinney’s squad put on top-ranked Alabama back in January to claim their second championship in three years.

Because Clemson beat ’Bama like it was a cupcake …

With its latest dominating performance, Clemson extended its school record winning streak to 26 games – dating back to a loss to aforementioned Alabama in the 2017 CFP semifinal game. The Tigers have now gone undefeated against the ACC in back-to-back regular seasons, and can complete back-to-back undefeated regular seasons with a win over hapless South Carolina later this month.

“We’re a talented football team, and we can overwhelm our opponents when we get short fields on offense and disrupt the line of scrimmage on defense,” Swinney said.

Also worth mentioning? Wake Forest was hardly a cupcake. The Demon Deacons (7-3, 3-3 ACC) had been ranked as high as No. 17 in the nation earlier this year and entered Saturday’s game averaging nearly 500 yards in total offense per contest. Still, Clemson’s stultifying defense – which saw its entire front four move on to the National Football League (NFL) after last season (including three first-round draft picks) – held Wake to an anemic 105 yards.

“There’s been 150 years of college football and what they’ve accomplished through eleven games is pretty special,” Clemson defensive coordinator Brent Venables said of his squad. “It’s hard to sustain success and the mindset it takes to not only win but to play well against a really well-coached and talented group, a very tough system to defend.”

Venables has sustained that success, though … and even more impressively he’s managed to do it multiple times during seasons that seemed destined to experience defensive letdowns due to the volume of talent departing early for the NFL.

On offense, early season stumbles are now long forgotten as quarterback Trevor Lawrence has shaken off his sophomore slump and healed himself of the turnover bug that plagued him during the first half of the year.

After throwing an ACC-leading eight interceptions through his first seven games, Lawrence (above) has not thrown a pick in his last four games. Over that span the 6-foot-6, 220-pound Cartersville, Georgia native has tossed 13 touchdowns and run for another two scores.

Against the Deacons, Lawrence completed 21 of 27 passes for four touchdowns – three of which went to junior wide receiver Tee Higgins.

For the season, Lawrence has thrown for 2,575 yards and 27 touchdowns – and rushed for 317 yards and seven touchdowns. And while his early season struggles took him off of the radar as a Heisman Trophy candidate, he is now 22-0 since taking over as Clemson’s starting quarterback following the fourth game of the 2018 season.

Lawrence’s completion percentage on the year is now 68.1 percent and his passer rating is 171.8 – both of which exceed his 2018 numbers.

On the ground, returned ACC player of the year Travis Etienne (above) eclipsed the 100-yard mark for the sixth consecutive game – amassing 121 yards on 16 carries with one touchdown. The 5-foot-10, 210-pound Jennings, Louisiana native also caught three passes for 37 yards.

Etienne – who has 1,375 rushing yards and fourteen touchdowns on the season – is the first Tiger tailback to run for more than 100 yards in six straight games.

Etienne also has 252 receiving yards and a pair of receiving touchdowns this year.

What makes the Tigers’ gaudy offensive numbers even more impressive? Typically they are putting them up through two-and-a-half quarters of play, which is when Swinney usually inserts his backups into lopsided contests.

Speaking of lopsided contests, after a bye week Clemson will head to Williams-Brice stadium in Columbia, S.C. on November 30 in search of its sixth straight win over the Gamecocks (4-7, 3-5 SEC). After losing five straight to South Carolina from 2009-2013, Clemson has once again turned this intra-state series into a “rivalry in name only.”