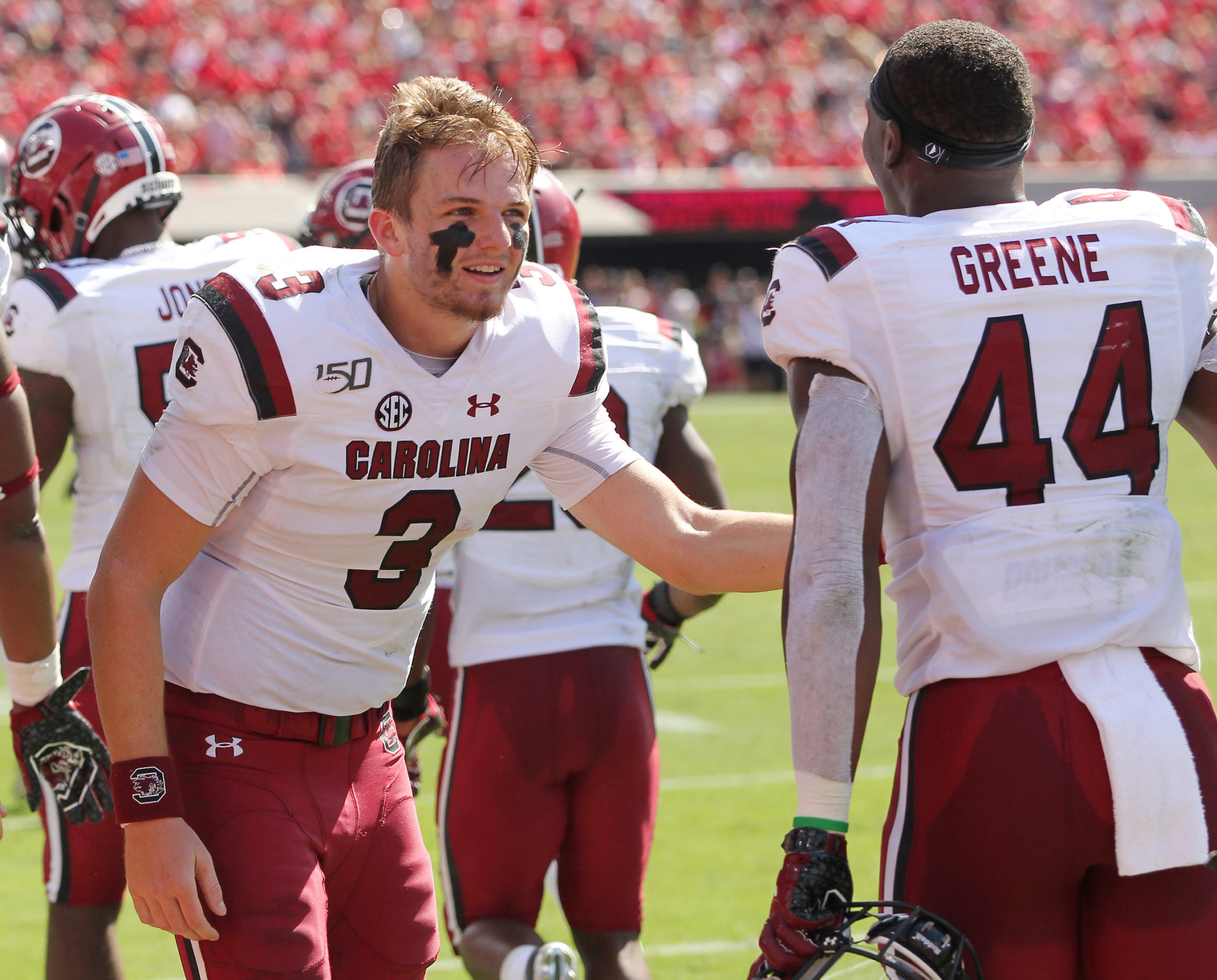 The University of South Carolina football team’s true freshman quarterback Ryan Hilinski should be ready to play next Saturday when ninth-ranked Florida comes to Williams-Brice stadium for a suddenly relevant SEC east showdown.

Hilinski sustained a sprained knee during the third quarter of South Carolina’s stunning 20-17 upset over then-No. 3 Georgia in Athens on Saturday. The injury occurred when Bulldogs’ defensive back Lewis Cine – who was coming at the quarterback on a blitz – tripped over a Gamecock offensive lineman and plunged into Hilinski’s left knee.

Social media erupted in the aftermath of the play – which at first glance gave the appearance of a dirty hit on Cine’s part.

It wasn’t dirty, though … and to his credit South Carolina head coach Will Muschamp said as much in updating members of the media as to Hilinski’s status on Sunday evening.

“The Georgia player tripped over our offensive lineman,” Muschamp told reporters. “There absolutely was no malicious activity at all.”

Props to Muschamp for clearing that up …

Hilinski has battled injuries ever since being installed as South Carolina’s starting quarterback earlier this season. Senior quarterback Jake Bentley – the team’s starter for the past two-and-a-half seasons – went down on the final play of the Gamecocks’ season-opening loss to North Carolina, an injury which thrust the 6-foot-3, 230-pound freshman from Orange, California into the limelight.

Hilinski (above) has posted a 3-2 record as South Carolina’s starter – completing 103 of 164 passes (62.8 percent) for 1,028 yards and six touchdowns. He has thrown three interceptions, been sacked eight times and has a passer rating of 123.9.

In addition to his six passing scores, Hilinski has one rushing touchdown on the season – although he is not considered to be an especially mobile quarterback even when healthy.

Should Hilinski prove unable to play against Florida, redshirt freshman Dakereon Joyner would get the start. The 6-foot-1, 205-pound North Charleston, S.C. native is extremely mobile, although he has yet to prove himself with his arm. Joyner has completed 13 of 24 passes for 128 yards so far this season with no touchdowns and no interceptions. He has also rushed for 77 yards and a score.

Kickoff from Williams-Brice is scheduled for 12:00 p.m. EDT with ESPN providing national coverage of the game. For those of you keeping score at home, odds makers have installed the visiting Gators (6-1, 3-1 SEC) as seven-point favorites over the Gamecocks (3-3, 2-2 SEC).

South Carolina nearly knocked off then-No. 15 Florida a year ago in Gainesville, but the Gators – who trailed by seventeen points deep into the third quarter – mounted a furious second half comeback to escape with a 35-31 victory.