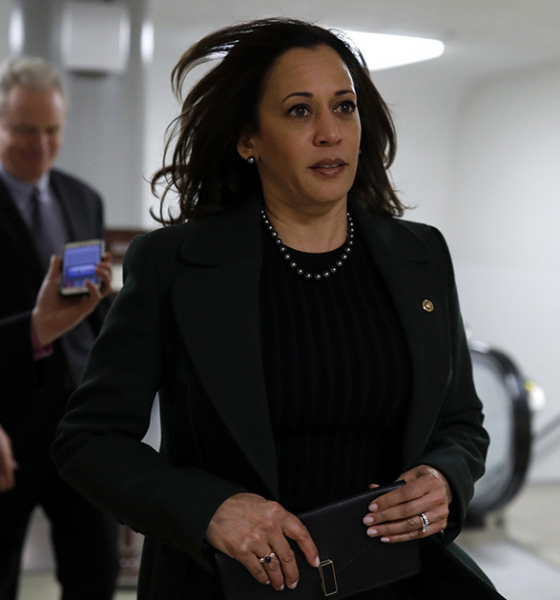 Here is a Facebook page devoted to the Pink Ice event, which will be held on January 25 at the Cantey Building on the S.C. State Fair grounds beginning at 8:00 p.m. EST.  This gala is billed as a “major fundraiser” for the Gamma Nu Omega chapter of the Alpha Kappa Alpha sorority.

“Over the years, this renowned gala has become one of the most well attended events in the Midlands,” event organizers noted.  “Each year, approximately 2500-plus guests and sorority members participate in an extraordinary evening of fun and fellowship.”

Harris was an Alpha Kappa Alpha pledge at Howard University, and the sorority’s famed “skee wee” – a high-pitched squeal of support – has become a rallying cry for her #YesWeKam candidacy.  In fact, reporter Chelsea Janes of The Washington Post has been getting excoriated on social media for being unfamiliar with the skee wee squeal.

Harris, 54, was San Francisco’s district attorney from 2004-2011 and California’s attorney general from 2011-2017.  The Oakland native – who is of Indian-Jamaican ancestry – was elected to the U.S. Senate in 2016.  A staunch proponent of criminal justice reform, she and fellow liberal senators/ presidential contenders Elizabeth Warren, Cory Booker, Kirsten Gillibrand and Bernie Sanders are all members of the so-called “Hell-No Caucus” – a group dedicated to blocking the judicial appointments of U.S. president Donald Trump.

Ironically, Harris may find some common ground in those efforts with Republican U.S. senator Tim Scott of South Carolina.

While she has yet to make a formal announcement, Harris is clearly one of the top tier Democratic presidential contenders.  In fact, her top tier status may be further solidified given the state of California’s push to advance its date on the 2020 presidential primary calendar.

In a recent “Washington Watch” interview, Rick Manning of Americans for Limited Government (ALG) noted that if California holds its primary early it could have “a huge, deciding impact on the nomination.”

“The cost of running in California is so prohibitive, only a candidate with high voter identification numbers and the ability to come into the primary fight with $100 million in campaign or outside group expenditures will be able to compete,” Manning added.  “This obviously benefits Harris as a statewide elected official who should have enough Hollywood support to be able to fund a significant campaign.”

This news outlet endorsed Trump (twice) during the 2016 presidential campaign – including prior to the February 2016 “First in the South” presidential primary in the Palmetto State.   Unfortunately, we believe the forty-fifth president has failed to live up to his promises on spending cuts, tax reform, the nomination of pro-life judges and his proposed wall on the U.S.-Mexican border – although to his credit he is belatedly fighting to get $5 billion in funding for a section of the wall included in the latest stopgap Washington, D.C. spending bill.

Which, of course, has led to the recent partial shutdown of the federal government …

Yet while we are by and large disappointed in Trump (who attempted to cave on the latest wall/ partial shutdown drama, it must be remembered), our news outlet has no interest in supporting a liberal Democrat for the presidency.  And based on how the last liberal presidency turned out, neither should you.

Like so many pro-freedom, pro-free market citizens … we are still waiting for a candidate to emerge who consistently represents our views.  We haven’t seen them yet, but if we do we will be sure to let our readers know.  In the meantime, our microphone remains open to Harris and presidential contenders of all parties and persuasions looking to share their views with voters in “First in the South” Carolina.

We obviously believe what we believe (passionately), but we are also cognizant of our role as a purveyor of divergent views in the marketplace of ideas here in the Palmetto State.