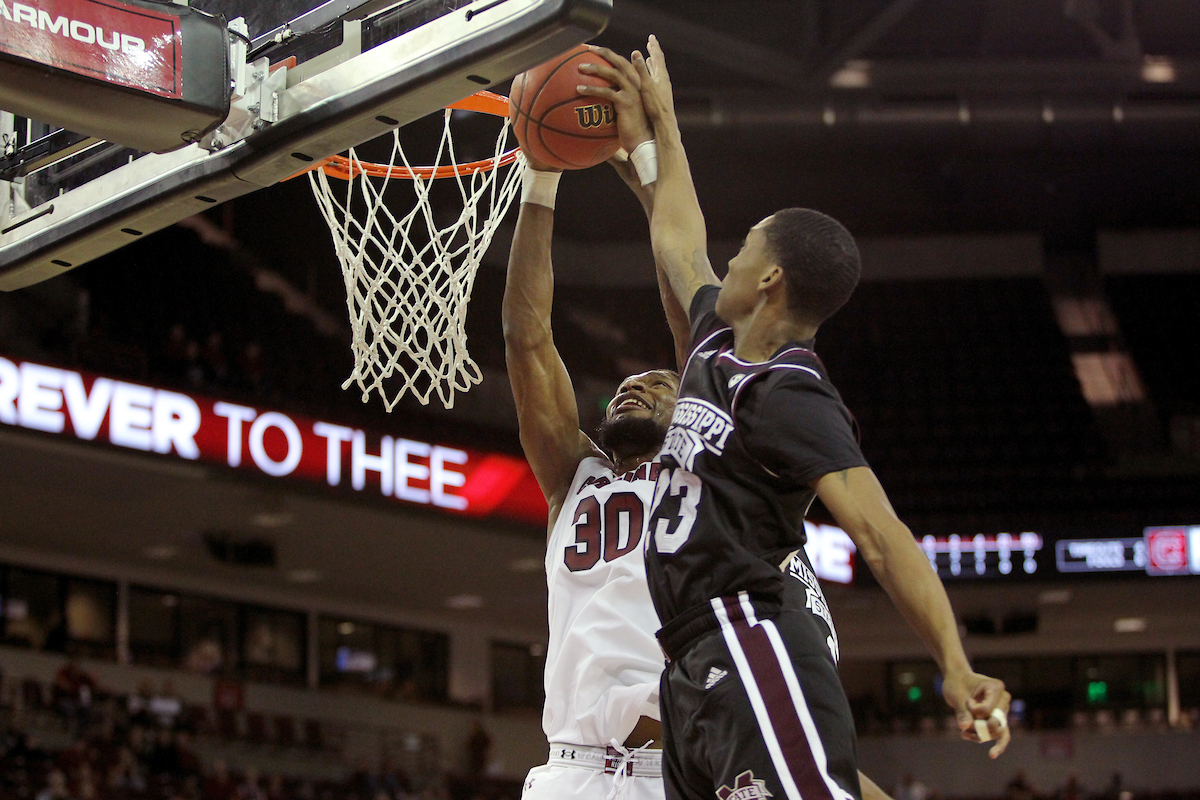 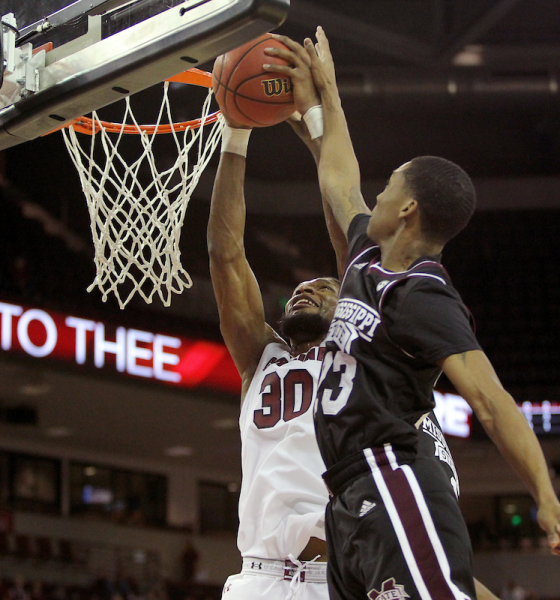 Can South Carolina turn around its disappointing season?

It has been a profoundly disappointing season for the University of South Carolina men’s basketball team and its irascible seventh-year head coach, Frank Martin.  Viewed by analysts as an NCAA “bubble” program, South Carolina stumbled badly out of the gate in 2018 – with Martin lashing out at fans, reporters and the evils of social media as his Gamecocks dropped decisions against quality (and not-so-quality) opponents.

For the moment, though, things appear to be stabilizing in Columbia …

After a last-second road victory over Florida on Saturday, South Carolina stunned No. 14 Mississippi State at home on Tuesday evening – downing the Bulldogs 87-82 in overtime.  The win puts the Gamecocks (7-7, 2-0 SEC) in sole possession of first place in the Southeastern Conference, although it remains to be seen whether they can keep the momentum going and salvage what many still see as a “lost season.”

Momentum is with South Carolina at the moment, though, despite drawing an announced crowd of only 8,776 to their big win in the cavernous Colonial Life Center in Columbia, S.C. on Tuesday night (a generous estimate, in our view).

Junior forward Maik Kotsar scored a career-high 25 points and grabbed nine boards in the upset win over the Bulldogs, which was sealed when true freshman A.J. Lawson made a key steal and threw down an arena-shaking slam dunk with nine seconds left on the clock. 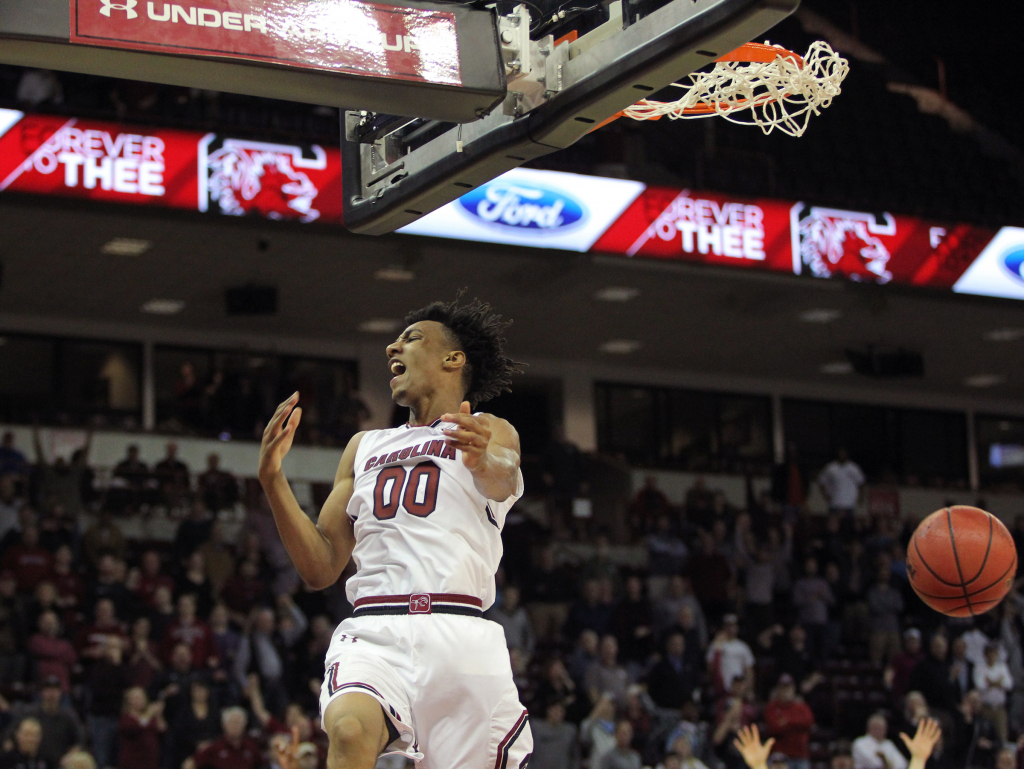 Lawson (above) – who entered the contest leading South Carolina in scoring with 13 points per game – was held to only six points against one of the nation’s elite programs.  Fortunately for Gamecock fans, he came through in the clutch.  And prior to that, he was bailed out by Kotsar, senior guard Hassani Gravett and preseason all-SEC performer Chris Silva.  In addition to Kotsar’s career night, Gravett poured in 17 points while Silva added 11 points and 12 rebounds – his nineteenth career double-double.

As is his custom, Silva got into foul trouble early against the Bulldogs but he somehow managed to avoid fouling out – playing the final 9:34 of the game with four fouls.

His physicality in the paint down the stretch was a big reason the Gamecocks were able to pull off their biggest win of the season – highlighting why the 6-foot-9, 234-pound native of Libreville, Gabon (who struggled mightily to start the season) is so indispensable to South Carolina’s success.

The game was nip-and-tuck from the get-go, with Mississippi State rallying from a seven-point second-half deficit to take a four-point lead with just over five minutes remaining on the clock.

Head coach Ben Howland’s team had the ball with a shot at the game-winning bucket at the end of regulation but junior guard Lamar Peters drew iron on a driving layup attempt and Gravett’s desperation heave from just inside the half-court line was also too strong.

Trailing 85-82 in the extra frame, the Bulldogs (12-2, 0-1 SEC) were looking to force a second overtime when Lawson stole the ball from sophomore guard Quinndary Weatherspoon and raced to other end of the court for the game-clinching jam.

Obviously upsetting a top fifteen opponent in a conference game is a big deal, but South Carolina still has its work cut out for it over the next three months.  The Gamecocks have upcoming contests against No. 11 Auburn, No. 3 Tennessee (twice), No. 18 Kentucky and another date with the Bulldogs – this time in Starkville, Mississippi.

In other words the road to a possible postseason berth remains exceedingly rocky … although it is nice to finally see signs of life from Martin’s team this year.  Hopefully the Gamecocks will keep the good times rolling when Missouri heads to the Colonial Life Center this weekend (tipoff is set for 1:00 p.m. EST on Saturday with the SEC Network providing coverage).

For those of you keeping score at home, here is the final box from Tuesday night’s game (.pdf) and the Gamecocks’ updated season scoring stats (.pdf).