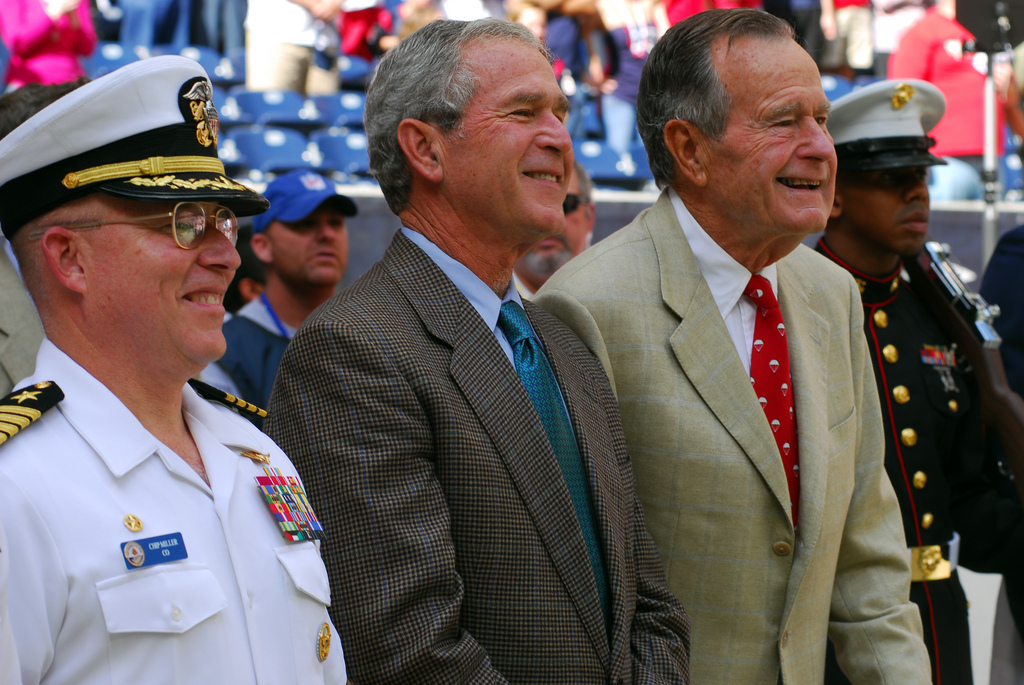 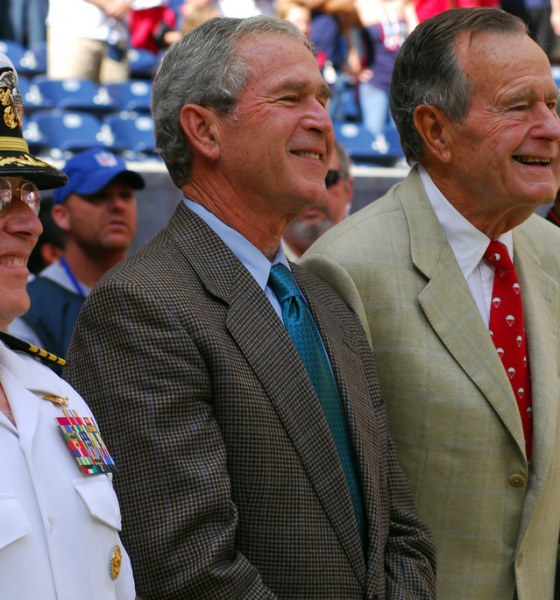 Former United States president George H.W. Bush – a staunch neoconservative who proclaimed a “new world order” and told us to “read his lips” on taxes (oops) – died late Friday at the age of 94.

“History will surely note that the breadth of his perspective, combined with the surety of his ideals, helped shape the dramatic times in which he led – when the tectonic plates of geopolitics shifted decisively in freedom’s direction,” a tribute on the late leader’s official website noted.

The elder Bush died at around 10:00 p.m. EST at his home in Houston, Texas eight months after his wife, former first lady Barbara Bush, passed away.  A state funeral for the ex-president will be held at the National Cathedral in Washington, D.C. next week, an event which will be attended by U.S. president Donald Trump and his wife, first lady Melania Trump.  Bush’s body will also lie in state in the rotunda of the U.S. capitol building.

“A state funeral is being arranged with all of the accompanying support and honors,” White House spokeswoman Sarah Sanders said.

Trump has also declared next Wednesday (December 5) to be a national day of mourning.

“Melania and I join with a grieving nation to mourn the loss of former president George H.W. Bush,” Trump said in a statement. “Through his essential authenticity, disarming wit, and unwavering commitment to faith, family, and country, President Bush inspired generations of his fellow Americans to public service – to be, in his words, ‘a thousand points of light’ illuminating the greatness, hope, and opportunity of America to the world.”

Like his son, the elder Bush refused to endorse Trump in 2016 after he had won the GOP nomination.  In fact, last fall he confirmed that he voted for Democratic presidential nominee Hillary Clinton – calling Trump a “blowhard.” 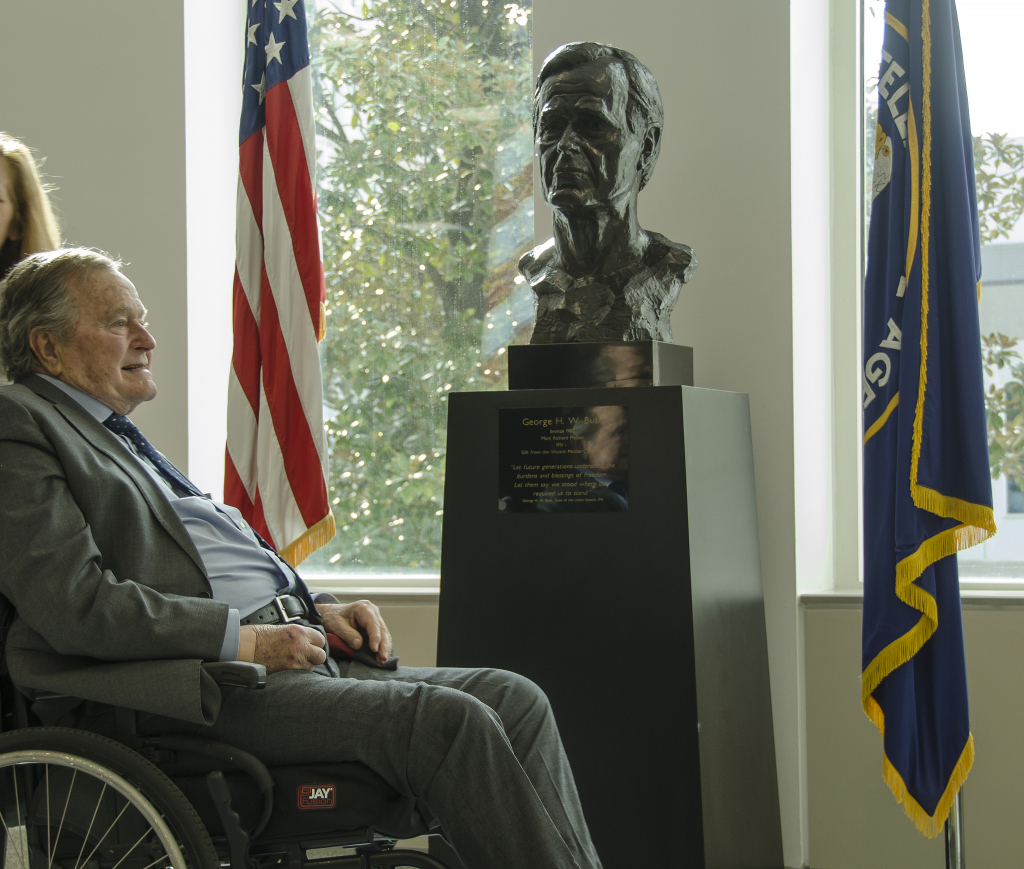 “I don’t like him,” the elder Bush told author Mark Updegrove for the latter’s book, The Last Republicans.   “I don’t know much about him, but I know he’s a blowhard. And I’m not too excited about him being a leader.”

Bush was mourned by his family members, who referred to him as “41” and his son as “43” to distinguish between the two ex-presidents.

“Jeb, Neil, Marvin, Doro, and I are saddened to announce that after 94 remarkable years, our dear Dad has died,” George W. Bush said in a statement. “George H.W. Bush was a man of the highest character and the best dad a son or daughter could ask for.  The entire Bush family is deeply grateful for 41’s life and love, for the compassion of those who have cared and prayed for Dad, and for the condolences of our friends and fellow citizens.”

Other ex-presidents joined in praising his life and legacy.

“Hillary and I mourn the passing of President George H. W. Bush, and give thanks for his great long life of service, love and friendship,” Bill Clinton said. “I am grateful for every minute I spent with him and will always hold our friendship as one of my life’s greatest gifts.”

Bush was elected president in 1988 and served one term in office from 1989-1993.  He was defeated in the 1992 presidential election by Clinton, drawing only 37.4 percent of the popular vote in a three-way race featuring Reform party candidate Ross Perot.

Prior to that, he served two terms as vice president under Ronald Reagan – who vanquished him in the 1980 GOP presidential primary.  Bush also served as director of the Central Intelligence Agency (CIA) under Gerald Ford, U.S. ambassador to the United Nations (UN) under Richard Nixon, chairman of the Republican National Committee (RNC) and represented Texas’ seventh congressional district in the U.S. congress for two terms.

Bush’s tenure as president is best remembered for America’s military intervention in Iraq following the 1990 invasion of Kuwait – which send his approval ratings soaring.  Unfortunately for “41,” profligate government spending (the deficit soared by nearly $2 trillion during his tenure in office), failure to keep his “no new taxes” pledge and the economy’s sluggish response to the recession of 1990-1991 doomed his reelection bid.

After enjoying stratospheric approval ratings (approaching 90 percent) in the aftermath of the first Iraq War, only 29 percent of Americans approved of Bush’s job performance in the waning days of the 1992 election – most of them expressing displeasure with prevailing economic conditions.

In fact, the well-known political maxim “the economy, stupid,” – attributed to Clinton campaign manager James Carville – was coined during the 1992 election in reference to Bush’s failed policies.

Bush was also famously lampooned by Saturday Night Live alum Dana Carvey, whose spot-on imitation of Bush’s “not gonna do it … wouldn’t be prudent … at this juncture” statements entertained audiences during the early 1990s.

“They welcomed my wife and I to the White House,” Carvey told Conan O’Brien on his late-night talk show earlier this week. “And we really hung out with them, we really got to know them.  We had so many warm moments with them.  It was a different time. It wasn’t scorched-earth, angry politics.”

This news outlet has never been a fan of either “41” or “43.”  Having said that, today is not the day to recapitulate litanies of disagreement.

Today, we offer the Bush family (as well as friends and former colleagues of the ex-president) our sympathies and wish them every comfort as they mourn the loss of a loved one.