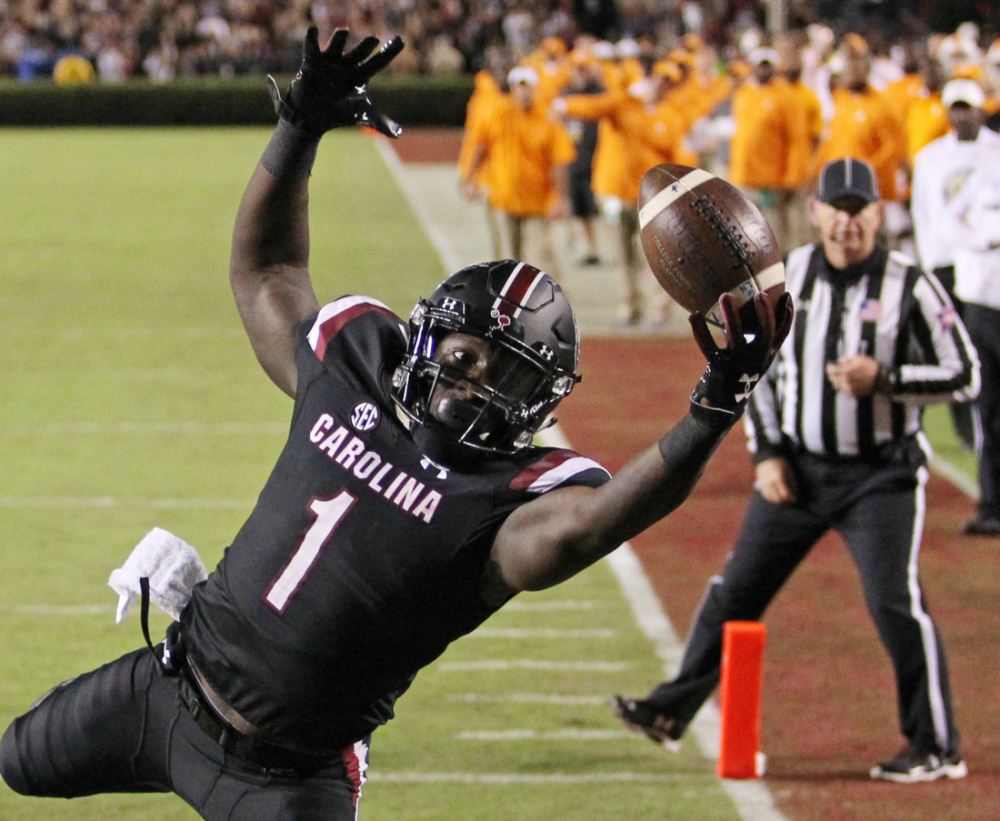 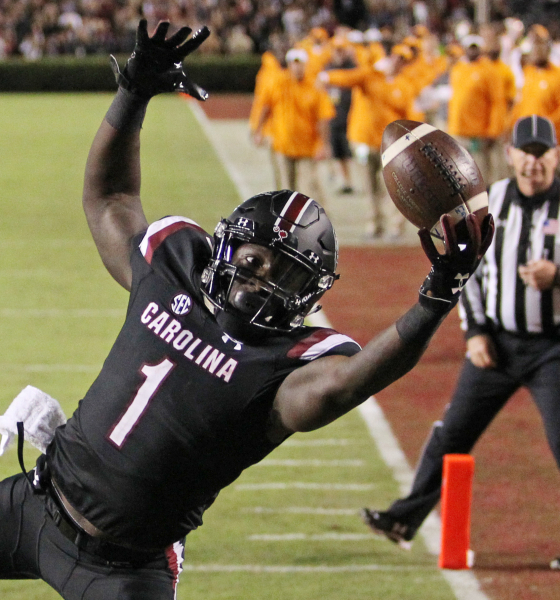 After trailing by double digits to the Volunteers – twice – much-maligned starting quarterback Jake Bentley came up with several big plays when his team absolutely had to have them.  The result?  An electrifying 27-24 win that the Gamecocks (4-3, 3-3 SEC) absolutely had to have if they want to go bowling for a third consecutive season.

A loss to the Volunteers would have put a major dent in South Carolina’s postseason prospects.  Now the Gamecocks have some margin for error – especially if they wind up playing either Marshall or Southern Mississippi in a twelfth game on the first day of December.

South Carolina was scheduled to play Marshall back in September, but that game was cancelled due to Hurricane Florence. 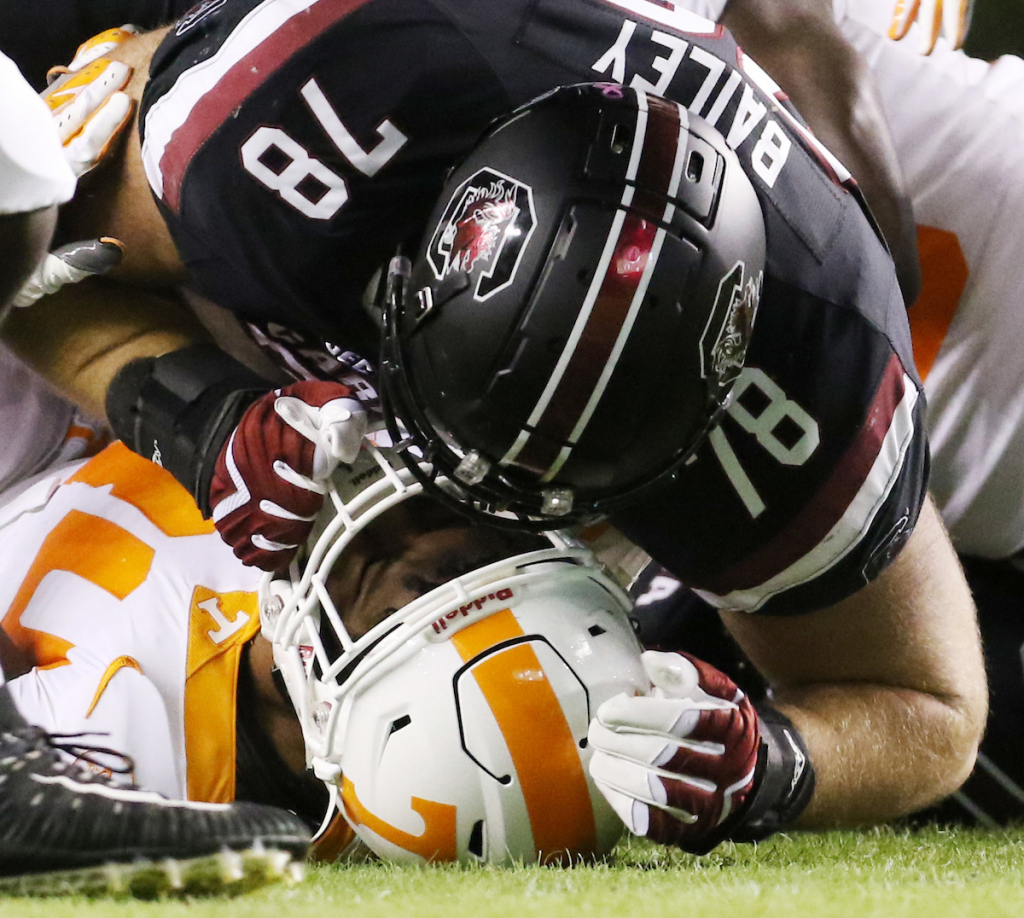 This game was a bitter defeat for Tennessee (3-5, 1-4 SEC) – which is now winless in three games against Bentley (and in seven games against South Carolina head coach Will Muschamp).

The Volunteers also desperately needed a win on Saturday to keep their slim postseason hopes alive, although unlike South Carolina expectations were (rightfully) tempered in Knoxville this season under first-year head coach Jeremy Pruitt.

Failure to bowl in Columbia, S.C. is not an option … especially given the steady progress the Gamecock program has made in its first two seasons under Muschamp.

“It’s a huge SEC win for us and it’s huge for our team,” Bentley said after the game. “The resiliency that our team showed the past couple of weeks and tonight is really a testament to our coaches and the culture that we have here.”

Bentley – who moved to 16-10 as South Carolina’s starter – reeled off several long runs in the second half against a fresh Vols’ defense that benefitted from a sizable time of possession advantage enjoyed by the Tennessee offense. He also scored a critical two-point conversion on the final play of the third quarter to tie the game at 24-24.

The 6-foot-4, 225-pound native of Opelika, Alabama completed 11 of 16 passes for 152 yards with one touchdown and one interception on the evening.  He also ran four times for 20 yards.

Are those good numbers?  Not really.  But in a game in which his team was “out-possessed” by a 2-to-1 margin, they were serviceable. 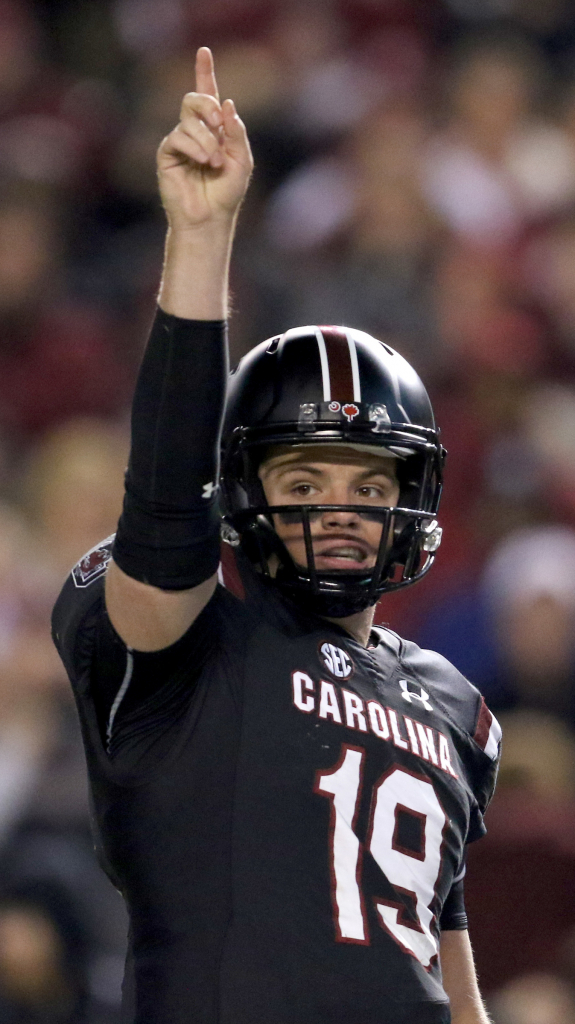 Bentley (above) was shaken up on the game-tying conversion attempt, but sprinted off the field after being attended to by South Carolina’s training staff – sending a surge of momentum through Williams-Brice stadium heading into the fourth quarter.

He later said the shot he received on the play was like “getting hit by a boulder.”

Bentley’s game-tying score was set up by an absolutely gorgeous 73-yard pass to junior wide receiver Bryan Edwards – giving the Gamecocks a first-and-goal from the Tennessee two-yard-line.

Junior running back Ty’Son Williams pounded the ball in the end zone three plays later – and then Bentley converted for the tie.

South Carolina fans have seen a lot of deep balls thrown this season, only to watch in frustration as they were overthrown, dropped or … intercepted.

Not this one.  The throw to Edwards was easily the best ball Bentley has uncorked all season … hitting the 6-foot-3, 220-pound junior from Conway, S.C. in stride as he raced past the Tennessee secondary.  Bentley threw another beautiful deep ball in the fourth quarter which was originally ruled a touchdown, but video replays showed sophomore wide receiver Shi Smith – who was interfered with on the play – dropped the ball in the end zone.

Still, South Carolina fans had to be encouraged to see their struggling signal-caller go deep – and put the ball on the money.

Bentley was aided by a grinding ground attack that put up 224 yards – including 140 from junior tailback Rico Dowdle (who eclipsed the 100-yard mark for the third time this season). 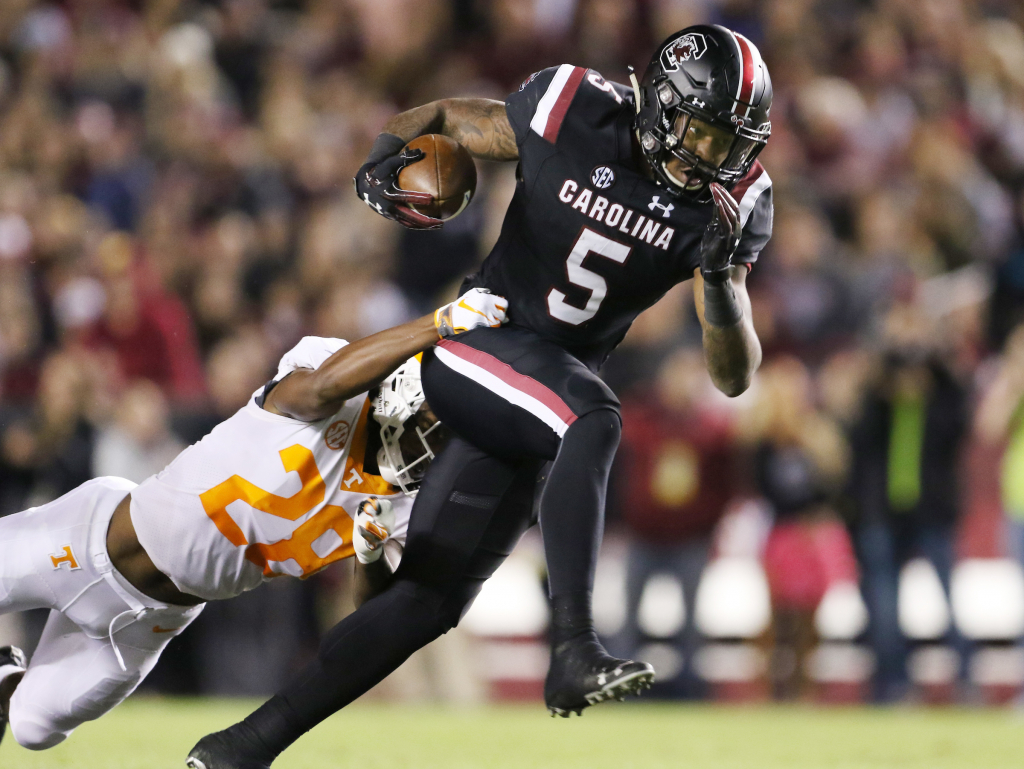 Dowdle probably would have put up even bigger numbers had he not been briefly knocked out of the game during the second half.  Junior Mon Denson spelled him in the fourth quarter, picking up 30 yards on six carries – including a 12-yard scamper that converted a key third down on the game-winning drive.  Denson did all of his damage during a 9-play, 57-yard march that set up sophomore kicker Parker White’s game-winning kick with just under six minutes left on the clock.

South Carolina’s defense struggled throughout the game, surrendering several long drives to the Volunteer offense.  But like Bentley, coordinator Travaris Robinson’s unit came through in the clutch – holding the Volunteers to just three points on their final three drives of the game.

Tennessee quarterback Jarrett Guaratano – who was effective in the short passing game for the Volunteers – was stopped on a pair of fourth down plays in the fourth quarter.  Defensive end D.J. Wonnum – who has missed five games this year with an ankle injury – helped clinch the Gamecocks victory with a sack of Guaratano with just over a minute remaining on the clock.

Tennessee was 11 of 16 on third down conversions against the Gamecocks, but came up short when it mattered on its final two drives.  The Volunteers were also 0-2 in converting fourth down attempts.

Up next for South Carolina?  The Gamecocks travel to Oxford, Mississippi for a showdown against SEC West foe Ole Miss. The Rebels (5-3, 1-3 SEC) were idle this week.  Kickoff from Vaught-Hemingway is scheduled for 11:00 a.m. EDT.