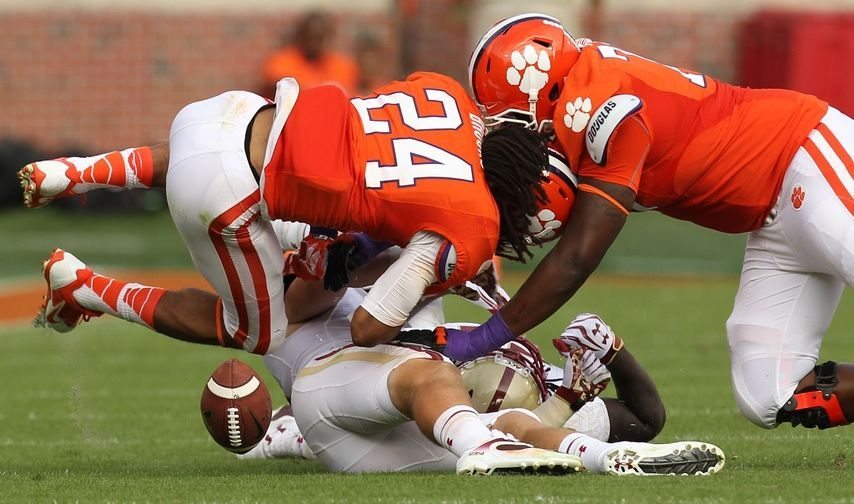 This website’s founding editor is a “strength of schedule” fan… meaning he wants every team squaring off against his beloved University of South Carolina Gamecock football team to win as many of their other games as they possibly can.

Why?  Because “to be the best you’ve got to beat the best.”  Or something like that.

Seriously, though, the better your opponents are … the better it looks when you beat them.  And whether we’re talking about computers selecting the two best teams in the country (1998-2013) or a panel of human beings selecting football’s “fearsome foursome” (2014-  ) … strength of schedule matters.  A lot.

That goes for all of South Carolina’s opponents – even arch-rival Clemson, which is squaring off against “The” Ohio State University in the 2014 Discover Orange Bowl on Friday night.  Will Folks (a.k.a. Sic Willie) has already picked the Tigers to win this game (owing to the weakness of the Big Ten)- but he also wants them to win.  After all, a Clemson victory over the seventh-ranked Buckeyes would mean the 2013 Gamecocks beat a pair of BCS bowl champions (Clemson and Central Florida) – in addition to its miracle road win over Missouri.

Not a bad resume …

Also, seeing as Clemson has lost five straight games to South Carolina … what do we care if they win their bowl game?

Of course some fans find it impossible to support their rivals under any circumstances.

Take the website Asinine Wisdom, whose author is a University of Alabama fan.  Over the holidays this author penned a marvelous column based on someone asking them whether they would cheer for rival Auburn in next week’s national championship game (due to conference loyalty).

“I can’t grasp how people that are Alabama fans can cheer for Auburn in good conscience. I just don’t get it,” the author wrote. “It is our duty as rivals to put all our collective focus into willing Auburn to lose. As much as some Auburn fans may deny it, they absolutely don’t cheer for Alabama in any capacity, and I would expect nothing less from them.  That’s how it’s supposed to be. I’m expected to wish them the best just because they’re in our conference?  Is that a joke?”

The author adds that such politically correct thinking “is precisely the disease that is infecting and killing college football.”

Of course we can understand the source of Bama fans’ frustration …

Anyway, the best argument against cheering for your rival is the impact their victories could have on recruiting.  In other words you don’t want your top in-state opponent picking up too many blue chip prospects as a result of too many big victories.  However the Alabama-Auburn rivalry (whose champion has gone on to claim the last four national titles) would seem to disprove that hypothesis.

Don’t get us wrong: It wouldn’t break our hearts to see Clemson get rolled in the Orange Bowl.  In fact the humiliating 70-33 defeat the Tigers suffered on their last trip to Miami provided us with literally months of delicious schadenfreude.

But a Clemson win is probably in the best long-term interests of the Gamecock football program … not to mention securing the program’s best-ever end-of-season ranking.