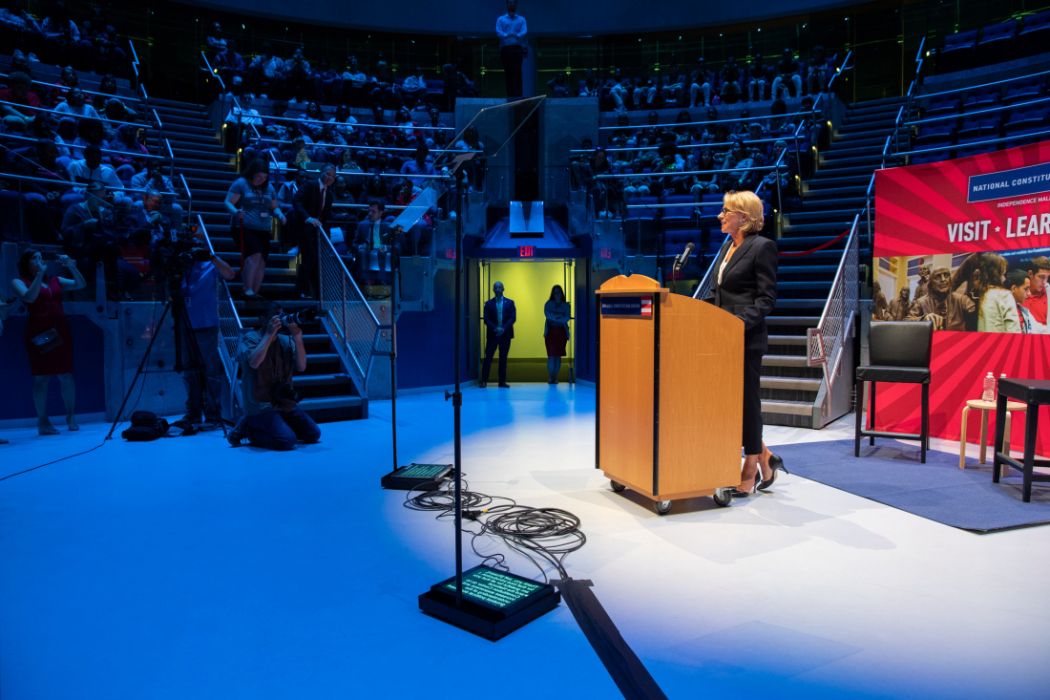 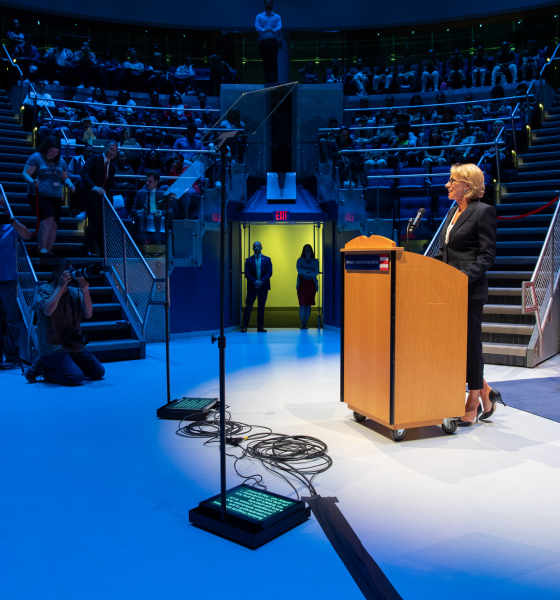 A conservative group advocating for the elimination of the U.S. Department of Education (USDE) submitted an open letter to president Donald Trump this week.  The group – U.S. Parents Involved in Education (USPIE) – called for the “immediate removal” of secretary of education Betsy DeVos and the “appointment of an American education leader who will prioritize the fulfillment of your campaign promises.”

USPIE – which boasts around 4,200 members nationwide – informed Trump that DeVos has “used the hammer of the federal government to broaden its authority and disregard the rights of states and parents.”  It also expressed disappointment over Trump’s failure to eliminate onerous federal education mandates – including the hated Common Core curriculum.

“We do not believe these actions are consistent with your ‘America First’ philosophy nor your campaign promises that generated so much enthusiasm,” the letter noted.

Trump repeatedly railed against Common Core during his 2016 presidential campaign.

“I am totally against Common Core,” Trump said at a 2015 Tea Party rally in early-voting South Carolina.

At a 2016 rally in Oklahoma, Trump vowed “we’re gonna bring education back to the states and back to the people and the parents.”

As soon as he was elected, though, Trump’s tone changed markedly.  He quit talking about Common Core, and his appointment of DeVos – a proponent of top-down education – signaled a reversal of his campaign policy.

“(Trump) repeatedly assured parents across the heartland that he intended to return power over education to local schools,” Frank Cannon, president of the anti-Common Core American Principles Project, told CNN on the eve of DeVos’ appointment. “An establishment, pro-Common Core secretary of education – this would not qualify as ‘draining the swamp’ – and it seems to fly in the face of what Trump has stated on education policy up to this point.”

Indeed it did … and the impact was immediate.

“Trump’s omission of Common Core from his speeches has raised the question of whether abolishing it remains part of his agenda,” Fred Barnes noted last spring for the Weekly Standard. 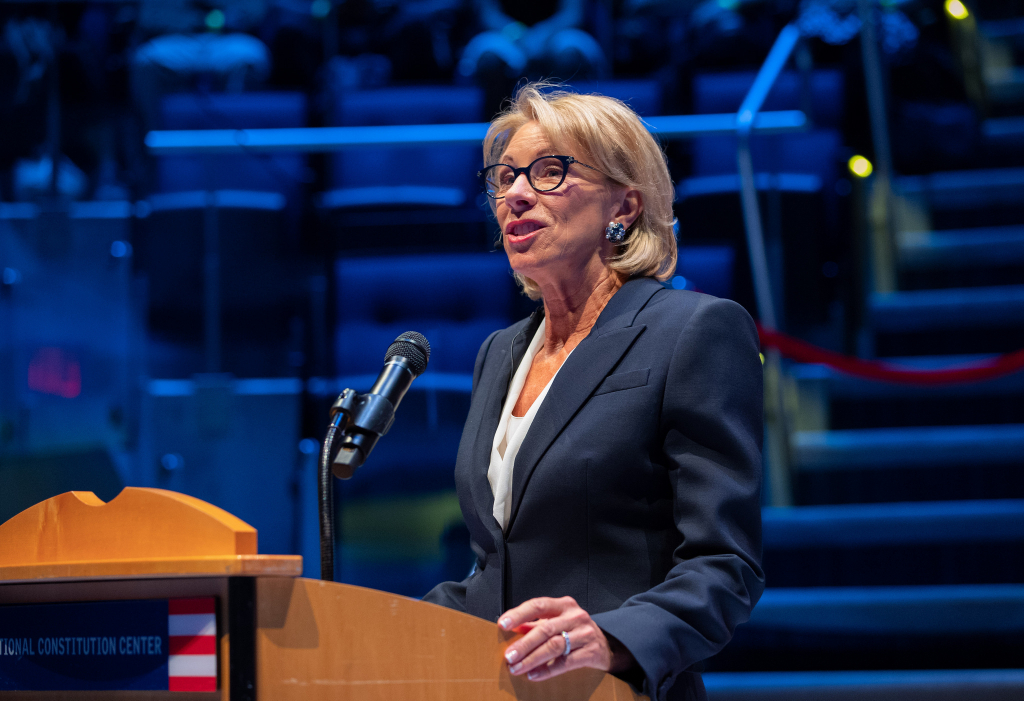 In its letter, USPIE expressed frustration with DeVos (above) for endorsing the United Nations (UN) education agenda, which it says “undermines not only parents and states but the fundamental sovereignty of the United States.”

Conservatives have railed against the UN agenda, with one critic saying it “represents a full-blown assault on parental rights and traditional morality that … could devastate a generation of young people.”

USPIE also objected to DeVos’ endorsement of a plan to consolidate the USDE with the federal Department of Labor (DOL), which the group warned would “fundamentally shift” the purpose of education to “workforce development.”

Finally, USPIE alleged in its letter that DeVos has repeatedly threatened state support for parental rights by withholding approval of plans related to federal Every Student Succeeds Act (ESSA).  This 2015 law – signed by former president Barack Obama – was supposed to return more control of education to the state and local levels.  Unfortunately, DeVos has used the measure to bully states into compliance with federal mandates.

Just last month, for example, DeVos forced the Utah State Board of Education (USBE) to compel more of its students to take federally mandated tests – threatening to withhold millions of dollars in federal aid if Utah refused to do so.

“So much for reducing reliance on high-stakes tests and devolving control to the states,” noted Autumn Cook for The Federalist.

Here is USPIE’s letter to Trump …

This news outlet has consistently called for the elimination of all federal oversight of “public” education – including shuttering USDE.

We have no objection to some combination of federal, state and local funds being appropriated toward K-12 education, however we have steadfastly argued that such investments must be routed through the marketplace – not through top-down bureaucracies and government-run school systems.

The current structure is doing nothing but subsidizing social promotion – and propping up institutional corruption at all levels.

Our logic is as follows: Parents have the right to receive a portion of the tax revenue earmarked for the advancement of their child’s academic interests to make sure those interests are actually being advanced.  We can debate how big a portion that should be – and how much should be left in the pot as a social safety net for those less fortunate – but at this point the debate over the efficacy of government-run education is over.

Like so many other well-intentioned expansions of government, it has failed.

According to the latest Programme for International Student Assessment (PISA) scores, the United States ranked 38th out of 71 nations in mathematics and 24th in science.  The 2015 PISA math score – the most recent data available – represented America’s lowest score ever.

Accordingly, we support USPIE in its effort to highlight these issues – and to hold the Trump administration accountable for its failures.  Of course it is both sad and surprising to learn that such accountability is required.

We were led to believe Trump was a true supporter of market-based academic reform, and we took him at his word when he vowed to put parents back in charge of their children’s education.  Clearly he has failed to live up to those promises, yet another area in which his administration has chosen to maintain – not drain – the Washington swamp.