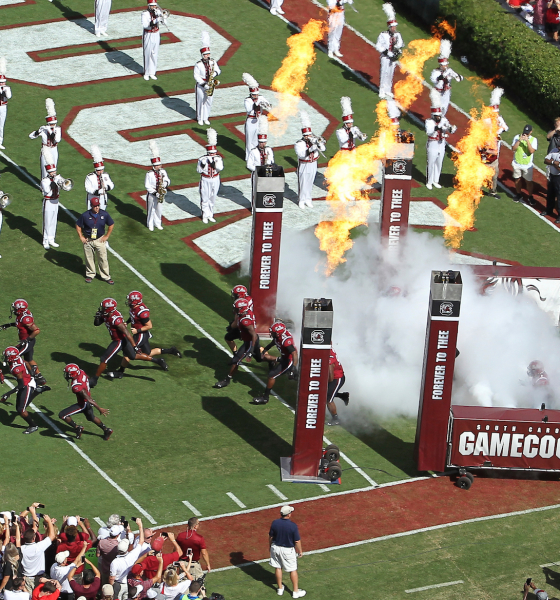 Will South Carolina make up its missing matchup?

The air has already escaped from the University of South Carolina’s 2018 football season – with preseason’s lofty expectations feeling the full gravitational pull of the the No. 3 Georgia Bulldogs last Saturday.

The crash was hard.  Not unlike the 2014 home opener against Texas A&M – when the program began its free fall from national prominence.

Head coach Will Muschamp’s team didn’t just lose to Georgia last week (for the third straight year, it’s worth noting), they got run out of their own stadium.

“For Gamecock fans, this was a devastating loss,” we wrote in the aftermath of the 41-17 drubbing.  “And for the Gamecock program, it was a potentially season-defining defeat.”

Now the season has been further defined by a game that will not be played – this Saturday’s home tilt against the Thundering Herd of Marshall University.  With Hurricane Florence forecast to move through the Palmetto State over the weekend, South Carolina president Harris Pastides and athletics director Ray Tanner made the decision to cancel the game.

Was that the right call?  Who knows …

When will the game be made up?  That’s another good question … maybe never. 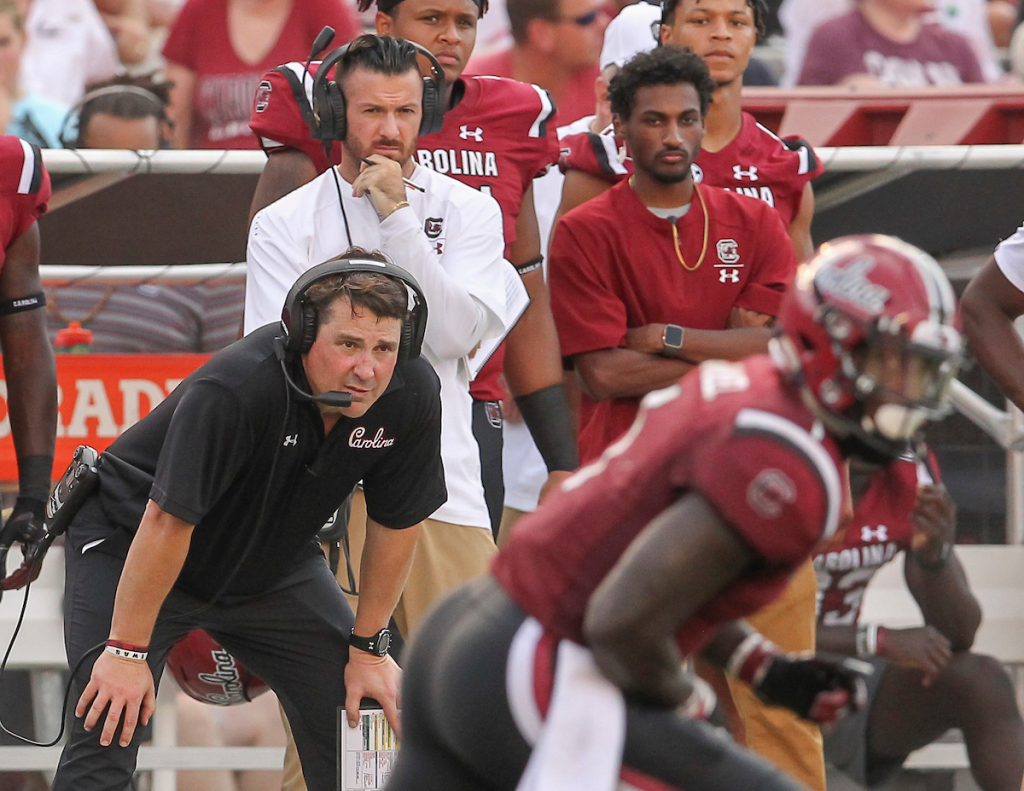 South Carolina head coach Will Muschamp keeps an eye on the action during the Georgia game on Saturday, Sept. 8, 2018 in Columbia, S.C. (Travis Bell/SIDELINE CAROLINA)

The Gamecocks (1-1, 0-1 SEC) have an open date on October 20 – sandwiched between home games against the aforementioned Aggies and Tennessee.  Or they could conceivably play on December 1 because let’s face it – it’s all but guaranteed at this point the team will not be representing the eastern division of the Southeastern Conference (SEC) in the league’s championship game that weekend.

December 1 is problematic for another reason, though, as high school state football championships are scheduled to be played at Williams-Brice stadium on that date.

In the event a replacement game does wind up being added to the schedule, would Marshall remain the opponent?  That is yet another open question.  The Herd are hosting Florida Atlantic on October 20, and they may be playing for a Conference USA championship on December 1.  In that case, South Carolina would have to find a replacement – and its options would be limited to teams which have been forced to cancel games earlier in the season.

Reporter Josh Kendall of The (Columbia, S.C.) State newspaper has an excellent breakdown of the possibilities for a twelfth game – although his piece makes it abundantly clear Gamecock athletic officials have not committed to scheduling such a contest.

“Adding a twelfth game is far from a certainty at this point,” Kendall wrote.

School officials may not have a choice, though.  Based on the way South Carolina played against Georgia, they may very well need that twelfth game to earn bowl eligibility – a status that was viewed as a lock just two weeks ago.

When the 2018 season began, South Carolina was widely expected to lose to Georgia (which it has now done) and arch-rival Clemson, the No. 2 football team in America (the Tigers, incidentally, will play their scheduled game this weekend against Georgia Southern – although kickoff was moved to 12:00 p.m. EDT to accommodate the approaching storm).

The rest of their schedule was viewed as eminently favorable … but not anymore.

After being exposed on both sides of the football against the Bulldogs, Gamecock hopes of a 10-2 regular season are now very much up looking like pipe dreams.  Conference road games against resurgent Kentucky (September 29) – which has won four in a row against the Gamecocks – and Ole Miss (November 3) look exceedingly dicey.  Same goes for the previously referenced home game against the Aggies, as well as an October 6 home tilt against Missouri.  A road trip to Gainesville, Florida against the Gators also now resides squarely in the toss-up category.

Muschamp’s team should probably beat the Volunteers, Vanderbilt and Chattanooga, but those wins alone won’t get them to a bowl.  They need to win at least two of the five toss-up games on their schedule to qualify for a third consecutive postseason berth.

And if they need a twelfth game to do it, they cannot schedule a lower-tier opponent – as their presumed win over Chattanooga would represent the lone victory over an FCS opponent capable of being applied to bowl eligibility.

So … can South Carolina still go bowling?  We think so … 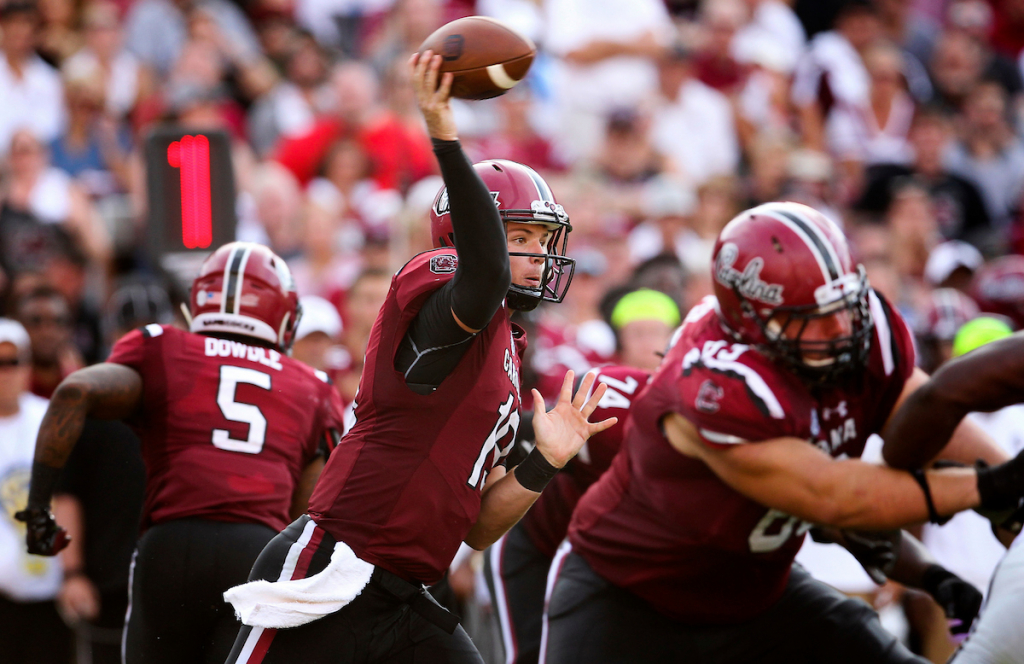 The Gamecocks have a lot more talent than they showed against Georgia, and we believe it is only a matter of time before the pieces start falling together.

Despite the deflating defeat last weekend, this team has the potential to catch fire and make a late run – sort of like it did last season in winning six of its last eight games (losing only to then-No. 1 Georgia and then-No. 3 Clemson).

All of the weapons are there … the coaching staff just has to figure out how to use them to maximum effect.

The disappointing reality, though?  Such a mid- to late-season run (assuming it happens) would likely only get the Gamecock program back to where it was a year ago … not the “next step forward” many fans were expecting heading into the fall.  And if that run doesn’t materialize, Gamecock fans will be looking at a step backward from last season – ratcheting up the pressure on Muschamp, Tanner and Pastides.

Will the South Carolina football program take a step forward, step backward or hold in place in 2018?