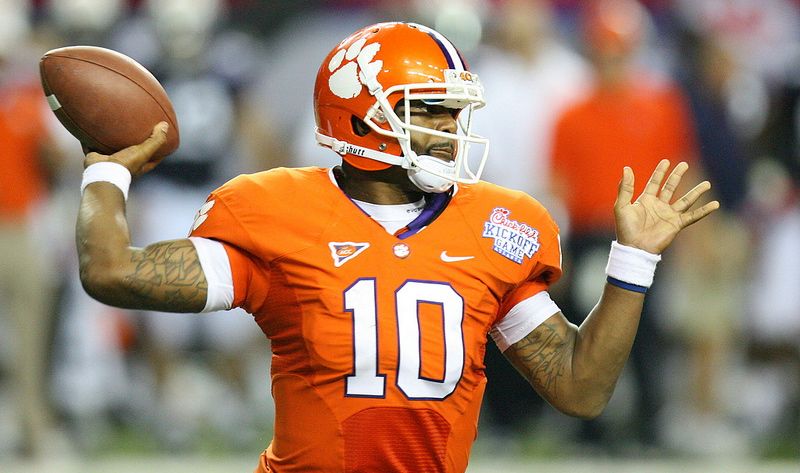 This website has had a field day ragging on Clemson University quarterback Tajh Boyd.  When Boyd was selected as a coaches’ first-team All-American last month, we questioned whether he deserved such an accolade – arguing he didn’t deserve to be ranked ahead of Heisman Trophy winner Johnny Manziel of Texas A&M.

“Given the weakness of the ACC, it’s frankly embarrassing that any All-American team would include Boyd over Manziel,” we wrote.

Well, Boyd made us eat our words (and then some) on New Year’s Eve – turning in a heroic performance in the 2012 Chick-fil-A Bowl to lead No. 14 Clemson to a 25-24 victory over No. 8 Louisiana State.  The 6-foot-1, 225-pound junior from Hampton, Virginia completed 36 of 50 passes for 346 yards and a pair of touchdowns against one of the best passing defenses in America.  He also ran for 22 yards on 29 carries – scoring on an 11-yard scamper in the first quarter.

But as we noted previously Boyd’s performance wasn’t about numbers – it was about heart.

Relentlessly pressured throughout the game by LSU’s dominating defensive front (which includes a pair of NFL first round picks), Boyd stood tall – showcasing his newfound mobility as well as his ability to take multiple hits.  As the saying goes, Boyd took a licking … but he kept the Clemson offense ticking, which was even more remarkable when you consider the Tigers lost 2011 All-American Sammy Watkins on the second play from scrimmage and were already playing without deep threat Martavis Bryant.

Not only that Clemson’s star tailback Andre Ellington was held to just fifty yards from scrimmage.

Boyd’s performance also came as Clemson’s offensive line was dominated all night by LSU – forcing him to make pinpoint throws without the luxury of going through his progression of receivers.

He made those throws, too – including a 26-yard throw to junior wide receiver DeAndre Hopkins on a fourth-and-sixteen play with less than a minute-and-a-half remaining on the clock, a play that kept the Tigers’ game-winning drive alive.

Boyd took hit after hit after hit – whether in the pocket or scrambling to gain hard-fought yards and critical first downs.  In addition to his mobility, accuracy and toughness, Boyd also played an incredibly smart game – taking care of the football against a defense that forced Texas A&M’s Heisman Trophy-winning signal caller to throw three interceptions.

Boyd had none against LSU.

We’ve given Boyd his due over the last two years, to be sure, but we always ended our stories by highlighting the fact he was putting up his stratospheric numbers against inferior Atlantic Coast Conference competition.

We can’t say that anymore …

Against a national championship caliber team, Boyd turned in the best – and gutsiest performance of his career.  And while there are plenty of question marks surrounding the ability of the ACC to compete against other conferences (particularly the powerful SEC), Clemson emphatically answered its critics by knocking off one of the SEC’s elite programs.

Bravo, Boyd … you earned this one.